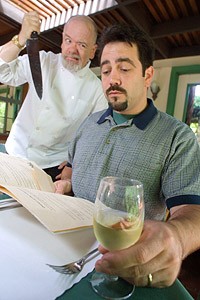 EVEN AFTER 26 years in the restaurant business, rude or just plain grumpy customers can still gall me. While simple bad manners can be forgiven, some behavior cries out for justice. Most patrons exhibit a gratitude and contentment befitting their circumstances. After all, they are being waited upon and fed. They don’t have to cook or do the dishes, and they aren’t obligated to invite their hosts back. These diners express satisfaction with the service and appreciation of their meal. Perhaps they even have as their motto “If you can’t say something nice, don’t say anything at all.” Waiters know that the customer who responds with a terse “fine” to an enquiry about his meal may be withholding some slight criticism.

Their reticence is respected.

Regretfully, other patrons take advantage of the relationship of diner and wait staff to engage in a fantasia of master and servant, an opportunity to play at upstairs/downstairs, re-creating for a few hours the class society of 19th-century England. Despite widespread comic representations of the surly waiter, it is more likely to be the customer who is churlish, petulant, and difficult.

For the most part, restaurateurs and staff take these less than exemplary human beings in stride. As one former employer told her staff, “The customer is always wrong, but we can’t let them know it.” Occasionally though, a guest’s conduct may be so egregious that some form of comeuppance is appropriate. I am not referring to anything so vulgar as spitting in their soup, a common icon of rebellion that hopefully never occurs in practice. No, the opportunity to serve rude customers their just deserts should be both more straightforward and more creative than that.

In the early ’80s, I worked for a man who was a devotee of Werner Ehrhart’s EST movement, one of those self-empowerment cults that sprang up in the wake of more benign spiritual groups. EST was based on an elaborate series of self-serving theories, and the owner had swallowed it all. He turned straightforward matters of employee relations into intricate exemplars of his staff’s psychological flaws. But we were able to forgive him for his peculiar management methods because he had an equally unique take on his relationship with his customers.

We all know that some customers seem to delight in complaining about their dining experience. One suspects that this is part of what they look forward to when they go out for dinner. Perhaps Mama refused them their bottle, or forced them to eat spinach too early, or never let them speak at the table. Such customers arrive with their antennae bristling, ready to detect any shortcoming. They are inpatient when they wait for their table; and when they are seated, their sensitive feng shui alerts them to the unsuitability of their placement in the room. The soup for them is always cold, the refill of their water never sufficiently prompt. The field of their negativity is well known to attract stray hairs onto their plates.

These ingrates are every restaurateur’s nightmare, and while waiters generally accept them as Job did his boils, my former employer with his EST training had found a more direct response. On more than one occasion I heard him tell customers, “Look, if you want to have a bad time here, that’s OK with me, but don’t lay the blame on us. This is your trip and you’ve got to accept responsibility for it.”

Huzzah. That’s hitting the nail on the head. His employees forgave him many of his trespasses because of this singular line of reasoning, and never mind that he applied it to both the overly sensitive and the genuinely affronted.

WHILE SOME customers arrive at the door primed to find fault, other guests turn from Jekyll to Hyde only after a few drinks too many. A few cocktails or a bottle of wine can make the food taste better, the conversation seem wittier, and the tip more generous, but a certain proportion of patrons make ill-tempered and unpleasant drunks.

A former sous-chef told me of a chic Napa eatery that was beset with a party of four businessmen whose mutual reaction to alcohol was to lose all social grace. Regretfully for the other diners, their table was in the middle of the small restaurant. As the evening progressed, they became louder and more obnoxious. Finally, one of the men in the party began to make lewd comments about their young bus girl.

Enough. The owner strode out to their table and asked them quietly but firmly to leave. Showing no sign of complying, the men engaged the chef in debate but stood their ground. The owner told them that they need not pay for their meal, but that they must leave immediately. Still no sign of movement from the table.

“Get out!” the owner cried, hoping that he might bring the communal force of the other diners to his side and shame the offenders into retreat. They didn’t budge. It was a Mexican standoff. Would he call the police? Grab a cleaver from the chopping block?

The owner’s brilliant solution was this: he flipped the four corners of the tablecloth to the center of the table, gathered it into a bundle, and with a rattle of plates and glassware hoisted it all in the air. Red wine dripped from the bottom of the sack as he carried it back to the kitchen. The men sat at a completely stripped table. They had not a glass or a fork. The dark vinyl top of the bare table glinted where the wine had spilled. The miscreants had no choice but to leave; and as the door closed behind them, the other diners burst into polite applause.

So it is most often the owner of a restaurant who feels at liberty to break the bounds of decorum. An employee, no matter how tempted, must know that to retort tit for tat in a tête-à-tête with a customer could mean his or her job. But an inventive waiter once solved an affront to his Gallic pride without simultaneously endangering his employment.

Michel was a very successful waiter, who despite spending half of his 30 years in the United States maintained a strong French accent, no doubt because it improved his tips. One evening he had particular difficulty with a couple about his own age. It was the gentleman who caused the problem. He ran Michel ragged, flaunted his–generally inaccurate–knowledge of wine and kept a running commentary of asides to his date about the inadequacy of the service and the deficiencies of the food. Between each course Michel fumed in the kitchen, describing the boor’s latest offense. “Now, ee says zee wine eez corked. It eez not.” According to Michel, the man’s girlfriend could see right through the lout, and she graced Michel with sympathetic glances while her date prattled on. “She eez too goud for eem,” Michel complained.

Michel presented the bill. The man paid with a credit card, adding a tip of exactly 10 per cent. The couple lingered at their table long after the bill was paid, the gentleman oblivious to his date’s restlessness.

As they were leaving, the man excused himself to go to the men’s room, and Michel took the opportunity to speak momentarily with the boor’s date. “Per-aps,” said Michel, “you would like to go out sometime with a man who eez more generous and more appreciative.” He handed her his telephone number.

She called the next day. They dated for over a year. Michel sometimes referred to her humorously, but with real affection, as “the best teep I ever got.”

Yet for every boorish patron who gets what’s coming to him, there are many that escape unscathed, at least in this life. But restaurant people–chefs and waiters and owners alike–share a superstitious belief in a restaurant hell. If through some fault they are assigned to this torment it will mean an endless cycle of rotten produce, dishwashers who don’t show up for work, nights when the items you’ve prepped heaviest for are ignored and obscure dishes are ordered in droves.

They take solace from the belief that on the other side of the swinging doors of that hell, former despots of the dinner table are spending their eternity at the worst table in the house, eating cold soup with a dirty spoon, and finding a succession of unsavory hairs in every dish.

Bob Engel is the former chef at Russian River Vineyards.