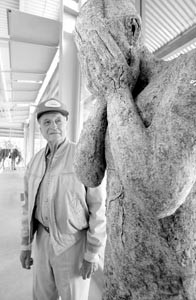 California dreaming: A self-described “artcoholic,” Rene di Rosa has assembled a collection of California art that is as eclectic as it is eccentric–and it’s all on view to the public at the di Rosa Preserve in Napa.

California art finds a home at the di Rosa Preserve

RENE DI ROSA is a tall, elderly man in farmer’s clothes, with the kind of nose you see in portraits of the Medicis. None of us, I think, recognized him as the man who ran the museum until he spoke up abruptly.

When addressed by a stranger, most urbanites look at their shoes. We studied ours as di Rosa started talking to the cluster of about two dozen visitors in the Gatehouse Gallery, on the grounds of the private art preserve that bears his name.

“I hope you’ll enjoy what you see,” di Rosa said. “This shuttle here”–he gestured out to the driveway where a jitney was waiting–“it takes you up to where I used to live.”

The Rene and Veronica di Rosa Preserve–located in the hills of Napa County–has to be the only world-class art collection whose proprietor greets you before you tour it.

From the gatehouse, it’s a short ride up the hill along Winery Lake to the three-story house and main gallery, which lies within sight of the busy Carneros Highway, not far from the Napa/Sonoma county line.

Nothing in the di Rosa preserve stops traffic. The gatehouse doesn’t look much different than the new prefab aluminum or steel barn buildings in surrounding vineyards. What most tourists would have eyes for is the pretentious jumbo replica of a French chateau that stands across the road.

But when you get away from the highway, you can see that di Rosa’s preserve is a very fine piece of property. In the 35-acre lake stand some of Veronica di Rosa’s steel sculptures of multicolored cows.

Veronica, an artist and writer, died in Normandy in 1991, falling from a path where she was picking wildflowers. The loss of his wife changed Rene di Rosa, it’s said. Once he was the kind of extrovert who’d wear a gorilla suit to public meetings to protest Sonoma County real-estate development. Now his energies are turned toward completing what could be described as a countercultural Hearst Castle.

It was a leaky barn when di Rosa found it; after much remodeling, it’s a handsome but not ostentatious turreted country manor overlooking the one-story steel gallery where most of the di Rosa’s art is displayed.

In addition to being a major gallery, the di Rosa Preserve is also a bird refuge. Waterfowl float on the lake. Padding in between the main gallery buildings are the peacocks, their fine feathers shining from the recent rains. I stopped counting after 20; later I learned there was 60, including a few calicos. “Mulattos,” di Rosa told me later. “There was a solid white one I had once, but they’ve interbred.”

IS THERE SUCH a thing as Northern California art–something in the people, as in the landscape, that makes Northern California special? Questions like these are best mulled over at the di Rosa Preserve. This private museum spells out its function in big chiseled stone letters: “divinely regional, superbly parochial, wondrously provincial . . . an absolutely native glory.”

Here in a group of buildings are some of the di Rosa Foundation’s 1,700 pieces of art–paintings, sculptures, and photographs by 600 artists, almost all from Northern California. The museum has been open for only the last three years, and the preserve is still little known because of rationed access caused by a traffic-retarding deal struck with the county.

With a collection this size, it’s hard to sum up the highlights. As collectors, Rene and Veronica had good instincts and an immunity to shock.

What stands out most are two works by the animistic yet feminist artist Joan Brown. Her 1975 Woman Preparing for a Shower sums up the tension of a placid, pretty woman on the edge of something otherworldly; it’s a bathing-woman painting without tease. Next to her, a strange dog stands on his hind legs, offering her a towel in his teeth.

Enrique Chagoya’s furious charcoal drawing, When Paradise Arrived, is an indelible satire of Southern California nativism. The colossal hand of Mickey Mouse prepares to flick aside a small dark-skinned girl, as if she were a sowbug.

Roy De Forest’s sculpture in the main gallery is both charming and disturbing, a prehensile-eyed, asymmetric critter sprouting wooden spindles, brushes, and a series of counterweights and pendulums to stay on its feet.

David Best’s art cars, a favorite, are studded with familiar objects, including poker chips, Stratego tiles, statuary, and spent ammo from a machine-gun belt. One hood ornament is a life-sized head of a rhinoceros. “Just cars with stuff on them. They ask nothing from the observer,” Best notes, as quoted in a recently published profile of the di Rosa Preserve, edited by di Rosa himself: Local Color: The Di Rosa Collection of Contemporary California Art (Chronicle Books; $35).

It’s a trick of the di Rosa gallery not to name the artists with the customary plaques. Instead, small notebooks in every chamber of the preserve have the names, titles, and dates.

This system could be seen to take away the identities of the artists, but di Rosa says he avoided title cards because it irked him to see visitors at a museum paying more attention to the text than the image. And the lack of captioning is meant to fit in with the origins of the di Rosa Preserve as a private home expanded to museum size.

The Yankee streak is still visible in the Boston-born di Rosa, in the way he laconically pronounces the name “San Fran-cis-co” when talking about the decline of the art scene there.

He was born in 1919, the son of the Italian consul and a Philadelphia woman. He went to Paris to write; couldn’t finish his novel; then came to San Francisco to work for the San Francisco Chronicle. During the 1950s he lived in North Beach, but he didn’t feel kinship with the beat scene.

“I’d come here from the Left Bank,” Di Rosa said, “not the left bank of the Sacramento River–and there didn’t seem to be a center of rebellion in San Francisco, or any artistic center. It wasn’t established. A new community hadn’t established itself yet.”

Years ahead of the back-to-the-land movement, di Rosa decided to become a farmer. He headed for the higher ground near the Sonoma/Napa county border on Carneros Road. In 1960, grapes hadn’t been grown in the area for almost 30 years. What phylloxera hadn’t ruined, Prohibition did. Planting cool-weather pinot noir and chardonnay grapes, di Rosa became a successful grape grower. In 1986 he sold 250 acres to Seagram’s and got out of the grape business.

Since then, di Rosa has been fully involved in the collecting of art. The self-described “artcoholic” has purchased about three dozen pieces in the last few months. A favorite prowling ground is student shows. He told me about a pair of a mixed-media pieces he acquired from Sonoma State University art shows.

“I like finding an emerging artist and acquiring their piece,” he explains. “It’s also art I can afford. Established artists are a little beyond my wallet.”

STUDYING agriculture at UC Davis in the 1960s, di Rosa became acquainted with some of the artists working in the art department there, including William Wiley and Roy de Forest. The Funk School, it’s been called. It’s very accessible art–playful, colorful, and insouciant.

Abstract expressionism has a seriousness of intent similar to the scholarly saxophone jazz of the era. Funk art is more like jug band music, with kazoos and banjos. The di Rosa collection has that homey streak; much of the collection is on the walls of the main house’s living rooms and bedrooms.

In the large gallery of the di Rosa Preserve is a bust by Terry Allen. Shoe is a bronze of a businessman with an upside-down shoe in his mouth. The footwear has been jammed in so forcefully that the ends of the man’s tie still swing in the breeze.

Allen is also a songwriter, the composer of an anti-New York art scene anthem called “Truckload of Art,” recently recorded by the Austin Lounge Lizards. In it, a truck of overvalued, blue-chip art from Manhattan crashes and burns: “A truckload of art is burnin’ near the highway/ And it’s raging far out of control./ What the critics have cheered are now shattered and queered/ and their noble reviews have been stewed on the road.”

If anything could sum up the di Rosa Preserve’s collection, it’s that song. Di Rosa’s unwillingness to act through curators and experts, along with his decision to go local and go for what he likes, is an example of the countercultural, eclectic, and unwilling-to-behave spirit that I’ve always honored and revered in Northern California.

This spirit of liberty and self-expression sometimes seems to be going the way of affordable housing. Still, a trip to the di Rosa Preserve revives those feelings of leisure and contemplation that ordinary life smothers.