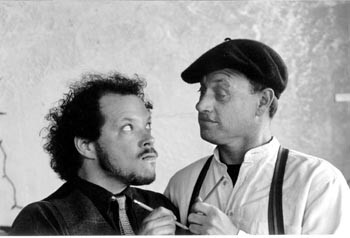 Picasso at the Lapin Agile

Picasso at the Lapin Agile.

Einstein meets the artist in ‘Picasso at the Lapin Agile’

ONE WOULDN’T think that a man who launched his career with ye olde arrow-through-the-head gag could succeed with a stab at legitimate theater–but, oh, does he.

Steve Martin’s cash-cow Picasso at the Lapin Agile (now swabbing the floorboards of Sonoma County Repertory Theatre under the direction of Diane Bailey) has enjoyed rampant success by mixing highbrow notions of science and art with an imaginative premise and heaping spoonfuls of silliness that occasionally foray into theatrical eloquence.

The play (named for an actual cafe whose name translates as “nimble rabbit”) whimsically wonders what would have happened if twentysomethings Albert Einstein and Pablo Picasso had strolled into the same Parisian bistro circa 1904.

Martin’s answer? A whole lotta self-congratulatory backslapping. And why not? Within months of Martin’s imagined meeting, Picasso would birth cubism with Les Demoiselles d’Avignon, and Einstein would publish his special theory of relativity.

Martin’s play portrays the duo as two wild and crazy guys–a pair of impassioned wags whose charm is proportionate to their talent. Interestingly, such depictions fly in the face of a recent spate of biopics suggesting that, at his worst, Picasso was a boorish womanizer and that Einstein was some order of emotional despot. But this ain’t history, bub, it’s theater.

SCRT’s production of Picasso at the Lapin Agile suffers a bit from uneven casting and takes a few missteps. Opening night was marred by jitters and cast members trouncing on each other’s lines. But the whole thing ultimately works, thanks to several hearty performances.

Xavier Lavoipierre does a brawny turn as the cubist-in-the-works Picasso. Clad in the ubiquitous black-and-white striped pullover that costume designers insist dominated Left Bank fashion in the early part of the century, Lavoipierre portrays the self-enraptured artist as both comic and impassioned, though he delivers a handful of his lines inaudibly (throughout, the players wage an often losing battle with the theater’s air conditioning).

Likewise, Eric Thompson’s ruddy-cheeked Einstein is a humorous amalgam of gee-whiz-can-do spirit and narcissistic conceit. His performance is especially satisfying when he lambastes the ineffectual intellects of the other characters.

In one of her many incarnations in this production, Trisha Davis turns in a droll and sexy performance as Suzanne, a Picasso groupie, who grows charmingly world-weary and wise as the show progresses.

Jonathan Graham proves himself the great overlord of bombastic delivery with his boisterous Schmendiman, an inventor whose lasting contribution to the 20th century turns out to be the use of the word cheese to elicit photogenic smiles. Gerald Haston’s wisecracking cafe proprietor, Freddy, is also a delight, as is Peggy Van Patten as his romantically adventuresome wife, Germaine.

Picasso at the Lapin Agile bears the unique distinction of being populist as well as provoking theater, sure to blossom in the capable hands of SCRT as its run continues and the inevitable kinks are worked out.