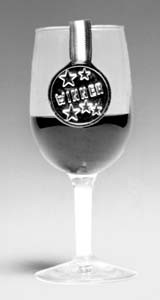 SHOPPING for wine is confusing. Depending on where one shops, the choices can range in number from a few dozen to several hundred. Factor in wine specialty stores–of which there is no shortage in Sonoma County–and the number multiplies. Then consider bottlings made in such minute quantities that they’re allocated only to selected retailers, and the entire vino-seeking experience becomes mind-numbing.

And we haven’t even mentioned the strides made by wineries in marketing.

The labels that adorn wine bottles no longer are intended merely to inform; their purpose is to catch the eye of the consumer and project an image.

One way is to put your trust in the gold-, silver- and bronze-medal ranking system employed by various wine competitions around the country. The annual competition that has risen head and shoulders above all others in recent years is staged in San Bernardino County, on the National Orange Show grounds. The 2000 Pacific Rim International Wine Competition took place during the week leading up to tax day and once again was administered by veteran wine educator Dr. James Crum.

As Crum notes, the wine-buying public should not be “put off” by a wine that has earned a Pacific Rim bronze medal. “By definition, if you buy a bronze medal­winning wine, you’re in for a very pleasant experience,” he says.

This year, Crum assembled 10 panels of three judges each–30 judges in all–to evaluate the bottlings entered by wineries from across the United States and several foreign countries. While the Sonoma County Harvest Fair competition shines the spotlight solely on local bottlings, the Pacific Rim event has gained greater stature owing in large part to its much wider boundaries.

A Long Road to Hoe

The road to Pacific Rim’s Grand Champion award for Y2K was a long one. As the 15th annual competition commenced, McIlroy Cellars’ 1998 Montavi Vineyard Zinfandel was just one bottle among 2,190. By day’s end, it had been awarded a gold medal and was named Best of Class among all zinfandels earning golds.

That Best of Class distinction qualified the wine for the Best Pacific Rim Red Wine taste-off the following day, competing against other Best of Class reds and evaluated by the competition’s entire 30-person judging staff.

When the wine was voted Best Red, it moved on to a final taste-off involving the best white, best sparkling, best dessert, and best fortified wines. And in that final evaluation round, it was the runaway winner.

When the identity of the wine was revealed, more than one judge’s eyebrow was seen tilting skyward. You see, most of California’s “superstar” zinfandels are made from grapes grown in Sonoma County’s Dry Creek Valley; the Montavi Vineyard is situated in the Russian River Valley, which is better known for producing topflight pinot noir.

Nonetheless, winemaker Will McIlroy was able to craft a real winner, no doubt attributable to his 20 years of winemaking experience.

McIlroy, along with another talented vintner, Gary Farrell, also makes wine for the Davis Bynum Winery. If you can’t find the McIlroy zinfandel–which is likely, since a mere 198 cases were produced–try any of Davis Bynum’s bottlings as an alternative. It will make your vino shopping a much less daunting experience.

The Best of the Rest

Best Dessert Wine: Jackson-Triggs 1997 Proprietor’s Reserve Riesling Icewine, Okanagan Valley. If you’ve never heard of the Okanagan Valley, that’s probably because it’s not in California. Heck, some of it’s not even in the United States. The valley runs from British Columbia into Washington state, and it’s particularly known for Riesling–from dry, Alsatian-style bottlings to super-sweet dessert wines, like this one.

Best Fortified Wine: St. Julian nonvintage “Michigan Light” Solera Cream Sherry. St. Julian established its solera aging system in 1973, and this rendition is a blend of all vintages from ’73 through ’96. Year after year, this wine wins more awards for the St. Julian Wine Co. than any other bottling.