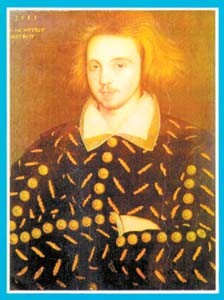 Sweet Kit: Marlowe gets it in the eye in ‘Renaissance.’

‘Renaissance’ is a tasty new stew, ‘Laughing’ a mess

Sonoma County Repertory Theatre should be praised, congratulated and adulated for its tireless commitment to the development of brand-spanking-new plays, the latest of which, John Moran’s Renaissance, is stalwartly facing its world premiere run at the Rep in a lively, confidently staged production directed by Sheri Lee Miller.

Renaissance is the second in a proposed five-play cycle by Moran, the first of which was Repertory, critically acclaimed when it was first performed in 1999 (a staged reading) and again in a fully staged, somewhat reworked production in 2000. Expect similar future tinkering for Renaissance, as playwright Moran, the Rep’s current playwright-in-residence, uses each live performance of his plays to test and experiment. He even goes so far as to invite theatergoers to e-mail him with comments, criticisms and suggestions.

While Repertory was a giddy speculation as to what would happen were William Shakespeare, Christopher Marlowe, Walter Raleigh and Ben Jonson to form a theater troupe in the New World, cleverly comparing the quarrelsome quartet to the Beatles, Renaissance is comparatively sedate, though frequently hilarious. Subtitled Marlowe Gets It in the Eye, Moran’s latest historical comedy takes place on May 30, 1598, the day of Marlowe’s murder, stabbed in the eye supposedly following a barroom brawl. Boasting a relatively vast 13-character cast, Renaissance is set in a two-room tavern run by the widow Eleanor Bull (Harmony Blossom), who apparently has a thing for the handsome Kit Marlowe, who is played with wry, swashbuckling cool by Daniel Riviera. Marlowe, unfortunately for the widow Bull, is gay, a character trait that, along with suspicions he might be secretly atheist and a writer of treasonous tracts, has landed him in trouble with the queen’s secret police.

History shows that Marlowe did spend his last hours in a tavern room with three men: his occasional agent Robert Poley (Clark Miller), the thuggish hired killer Nicholas Skeres (played with smoldering venom by Eric Thompson) and the alleged eye stabber himself, Inghram Frizer (Dwayne Stincelli). As the three not-so-wise men interrogate Marlowe, calling details of his plays into question for their potential “secret messages,” the parallels to the McCarthy black list become juicily apparent.

For comic relief, Moran has thrown in a family of job-seeking tavern workers (Rich Deike, Mary Lou Sefton and Peggy Van Patten) and a deliciously affected pair of actors, Edwardson and Sell (the brilliant duo of Dan Saski and Noah Lucé), who show up looking for parts in Marlowe’s next play. A late-show appearance by Oxford (Ciaran Vejby) and a drop-dead funny Shakespeare (Miyaka Cochrane) leads to the play’s funniest moments, the “truth” about Marlowe’s murder and yet another twist on the old theory of who really wrote all of Shakespeare’s plays.

Though a bit longer than necessary, with a few too many unconnected side stories and a face-the-audience narration device that bizarrely disappears after 20 minutes, Renaissance works, weaving history and blatant anachronism into a funny, meaty stew of theatrical and political farce.

Christopher Durang’s Sister Mary Ignatius Explains It All for You ranks solidly among my very favorite modern plays, having only recently been bumped to the No. 2 position by David Auburn’s Proof. I also admire Durang’s Beyond Therapy and The Marriage of Bette and Boo. His superb and uproarious one-act The Actor’s Nightmare is one I often reread for the sheer pleasure of the words and ideas. I am, by anyone’s measure, a staunch fan of Christopher Durang’s genius.

Somehow, however, I’ve completely missed Laughing Wild, one of Durang’s better-known pieces and one that has been remounted numerous times since it first appeared in 1987, right at the height of the playwright’s popularity. So when it was announced that the show would be staged at Cinnabar Theater, in a production by Western Union Theatre Company, directed by the great Elizabeth Craven, I was fairly certain I knew what to expect from Durang’s famously plotless play and from this production. Mainly, I expected to enjoy it from beginning to end.

I was half right.

With roots in the Theater of the Absurd, Durang specializes in comedies about seriously disturbed people, frequently those who’ve been damaged by religion. In Laughing Wild, an oddly constructed show in which emotional frailty is explored in a series of loosely connected mini-plays, the Durang stamp is in clear evidence, but with much less of the focus and control his most successful plays exhibit.

Though occasionally funny, Laughing Wild is a fascinating mess, and a rambling one at that, with moments of insight and spot-on satire mingled with long deviations from the point that don’t add up in the end. Certainly, it can be argued that Theater of the Absurd is all about not adding up to anything, as it reflects the absurdity of life by showing that life rarely makes sense. Fine. I agree. But the best absurdist pieces still end up at a place that is intellectually satisfying. This one just left me frustrated.

The play begins with a long monologue, a whacked-out riff on everything that is wrong with modern society, delivered by the woman (Laura Jorgenson), whose existential misadventures include a violent confrontation with a man in the tuna-fish section of a grocery store. Clearly a borderline psychotic, the woman rants about her failed life, hopes and dreams and her hatred for Mother Theresa and TV talk-show host Sally Jesse Raphael.

Next up is the man (Joe Craven), another tragically unhinged soul delivering a self-help workshop on relaxation techniques, who has not quite recovered from a bad encounter with a crazy woman in the tuna-fish section of the grocery store. Far less focused than the first monologue, the man rambles all over the map. It’s occasionally funny, but much of it seems beside the point. The second act is a series of strange dream sequences, including several variations on the pivotal encounter in the supermarket.

I don’t fault the actors, whose performances are nothing short of astonishing, fully committed, as it were, to the bittersweet dementia of their characters. With Laughing Wild, it’s Christopher Durang who lost me.

A Light in the Dark