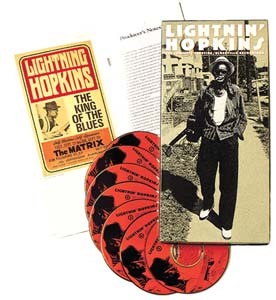 Legend has it that Sam “Lightnin'” Hopkins–a straggly Texas kid who learned to play the guitar from his brother–once heard blues great Blind Lemon Jefferson at a Baptist church social. Hopkins spent the entire day working up enough nerve to walk up to the stage and play along, only to be shot down when Jefferson shouted, “Boy, you gotta play it right!”

By the time Bay Area filmmaker Les Blank made his award-winning 1967 documentary The Blues According to Lightnin’ Hopkins, the then-legendary singer and guitarist had indeed learned to play it right, perfecting a raw, emotional and improvisational style that earned him the reputation as the last great country bluesman.

“When I plays the guitar,” he told Blank, “I plays it from my heart and soul. And I plays my own music.”

While he never became a household name, Lightnin’ Hopkins is regarded in blues circles as a musician’s musician. He’s also a pervasive influence on succeeding generations; his sometimes rough-and-tumble style resonating in the raucous punk-blues of the White Stripes and the Black Keys.

Hopkins died in 1982, but not before recording some of the finest folk-blues around. His vaunted status has been reinforced over the past year by the release of more than a dozen reissues and anthologies. Two of the best, released in the last few weeks, are Hello Central: The Best of Lightnin’ Hopkins (Columbia Legacy) and The Best of Lightnin’ Hopkins (Fantasy/ Prestige).

The former is part of Sony’s longstanding “Roots ‘n’ Blues” series and gathers 20 tracks from Hopkins’ Mainstream and Jax label albums. Hello Central has a laid-back, front-porch sensibility that perfectly captures the understated performance style that made Hopkins a hit during the ’60s folk and blues revival. Such songs as the dirgelike “No Good Woman” are rife with melancholy and a sense of loneliness that serve as a counterpoint to Hopkins’ twisting guitar lines.

While both of these discs are highly recommended, neither is as far-ranging as Rhino Records’ 1993 two-CD anthology Mojo Hand, which compiled 40 tracks that rank among Hopkins’ best. While it’s not a definitive retrospective–that would prove too unwieldy, considering Hopkins’ prolific career–it is a comprehensive and insightful overview of a remarkably powerful American blues artist.

For a real treat, check out 1993’s hard-to-find It’s a Sin to Be Rich, a must-have blues classic. Recorded “live” in the studio in 1972 and shelved for two decades, It’s a Sin teams Hopkins with an ace studio band that features guitarists John Lee Hooker, the late Luther Tucker (a Chess studio sideman who lived in Marin County for many years before his untimely death) and Jesse Ed Davis (best known for his work on John Lennon’s early solo albums), plus session drummer Jim Gordon (playing one of his earliest studio gigs). It’s a loose, down-and-dirty session that simply simmers with the mojo man’s mystical hoodoo.