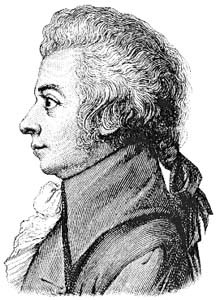 Rachmaninoff!: Would Wolfie appreciate the classical qualities of the ring tone?

For Whom the Ring Tones

Ring tones find their way to the Billboard chart

There’s a scene in Willy Wonka and the Chocolate Factory where Willy Wonka plays the opening bars of the overture to The Marriage of Figaro on a tiny keyboard in order to unlock the doors to the nerve center of his factory. Upon hearing the fleeting snippet of Mozart, one woman blurts out “Rachmaninoff!”

Thanks to the plethora of ring tones available to consumers, similar scenarios can play out in real life innumerable times a day–fragments of beloved symphonies or moving cinematic themes chirp from millions of cell phones all over the world with all the authority and command of the base-model $9.99 Casio keyboard you got for Christmas in third grade.

There’s nothing wrong with employing technology for harmless amusement, and if you own a cell phone, you might as well make it play silly little songs for fun. But remember when phones rang and that’s all they did–ring? The option of a phone call announcing itself in the form of “Twinkle, Twinkle, Little Star”–let alone Usher and Alicia Keys’ “My Boo”–simply did not exist.

Assuming that some of you live in caves and emerge only on a weekly basis to retrieve your new issue of the Bohemian, ring tones are songs and sound effects that people can program their cell phones to blip out all cutesy-style, so that instead of hearing a traditional ring or beep, they hear a really lame version of “Build Me Up, Buttercup.”

In Asia and Europe, ring tones are big business. Last year’s worldwide sales have been estimated at $3 billion. Here in America, ring tones are just starting to gain steam with an audience outside their present core of younger, more urban users. That spells money, especially since it can cost $1.99 or so to download a splashy new ring tone. And that’s why Billboard Magazine has announced the launch of the Hot Ringtones chart, which will track the top 20 weekly worldwide ring-tone sales.

From a strictly business standpoint, it’s pretty straightforward: ring tones are a product, and the Hot Ringtones chart will follow the sales of that product. But from the perspective of a music fan, matters get murky. Other Billboard charts track the sales of albums and singles, which, while peddled as commodities by big record companies, are also ostensibly musicians’ works of creative expression and artistic merit.

Ring tones are in another category: somewhat primitive-sounding versions of popular songs that function more as an audio accessory than real compositions, they are basically musical fashion, little more than a downloadable T-shirt or button flaunting your favorite band-of-the-moment. That’s why it’s ridiculous that the record industry has partially blamed the popularity of ring tones for the decline in music sales. It’s like blaming sagging tuba sales on a sudden boom in doorbell installations. People fall in love with songs and seek out the ring tones, not the other way around.

Having only a land line myself, I spent an evening on the Internet, listening to sample ring tones. First, I located a version of my all-time favorite song, Del Shannon’s “Runaway.” Dear Holy Christ. Shrill and difficult to place or recognize, it made the sound effects to Pong seem melodic and baroque. It’s a good thing for Del that he already committed suicide, because that ring tone would surely drive him to it.

Even so, if they ever do come up with ring tones that very closely approximate the way original songs sound, that’s when we’ll be in trouble. I wouldn’t want the real “Runaway” on my cell phone, because it trivializes how music makes us feel to have it chiming at totally random intervals every single damn time someone calls to say they’ll be five minutes late to meet you at the bar or ask what groceries you need. In fact, if you ever run across a kick-ass ring tone–a ring tone that you can bang your head to or pump your fist to–please let me know, so I can go find those caves I mentioned earlier.