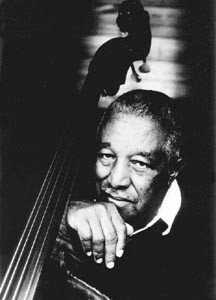 The bottom line on jazz-string greats

TRADITIONALLY, the jazz bass player is relegated to a supporting role, with guitarists, or even more likely, horn players, getting all the goodies. Even jazz legend Milt Hinton–the grandfather of the jazz bass–accepted that his booming tempos and fat buoyant sound were meant as a foundation for the likes of such stars as Louis Armstrong, Dizzy Gillespie, and Count Basie. Hinton took his supporting role as an accompanist in full stride, National Public Radio once noted, saying, “It’s necessary that you have enough humility to make somebody else sound good.”

Still, every once in a while, you have to give the bass player some. And a pair of new CDs on the Telarc label do just that. The result: both recordings are serious contenders as jazz album of the year.

Super Bass 2 reunites seasoned veteran Ray Brown (a bebop icon who literally wrote the book on jazz bass; his erstwhile instruction manual is a primer for many students) with relative newcomers John Clayton and Christian McBride on a dozen tracks that spotlight solo, duo, and trio settings on standards that range from Monk’s deeply soulful “Mysterioso” to the Temptations’ funky “Papa Was a Rolling Stone.” It is the follow-up to 1989’s Super Bass Live, which evolved from what at the time was considered a one-off bass troika on a McBride album. While George Fludas and Larry Fuller provide spot percussion on a pair of tracks, the bulk of this sensational disc–recorded live at the Blue Note nightclub in New York City–is pure, unadulterated bass.

While jazz solo albums are a rarity–Marin bassist Rob Wasserman’s 1982 outing Solo (Rounder) was one of the first to explore that realm–this sets the new standard, thanks to the amazing musicianship, panache, humor, soul, and respect these players show for one another. In fact, their interplay is uncanny at times–alternately melodic and propulsively rhythmic and never overbearing. The sound is, as Dr. Herb Wong mentions in his liner notes, “lustrous,” with the trio trading off stellar bowing and almost magically stitched bass lines.

Perfect for the heart and soul.

On the other hand, the more cerebral Jim Hall & Basses (scheduled for a Sept. 25 release) pairs jazz guitarist Jim Hall with bassists McBride, Charlie Haden, Dave Holland, the woefully underrated George Mraz, and Scott Colley in both duo and trio settings. As the reigning king of jazz guitar (Pat Metheny has borrowed heavily from the Hall style sheet), Hall displays his always tasteful and uniquely textured approach to space and sound. Jim Hall & Basses is rife with sparse arrangements that, while as intimate as Super Bass 2 in their own way, express a wholly different vocabulary: less groove-laden than the bass troika, there is a far cooler, abstract quality to Hall’s playing that lends itself to broader musical exploration.

Good for the mind.