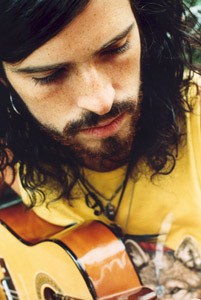 The word “folk” is tossed around so much in the context of music that I’d forgotten what it means. We need genres and subgenres to help tame the pulsing, many-tailed creature that is popular music, but sometimes they can be patronizing. Take, for example, the term “freak folk,” recently affixed to sounds created by a group of up-and-coming musicians, a number of whom make their home in the San Francisco Bay Area. Many of them share a gentle awe of the world in their lyrics and music, and while the mood of their songs can range from whimsical to intimate to low-fi, I’m not too clear on what’s freakish about them.

Let’s back up a few years to late 2002, when Devendra Banhart’s solo debut Oh Me Oh My. . . toddled naked into the world and charmed pockets of critics with its unassuming otherworldliness. The youthful but well-traveled Banhart went beyond the four-track, recording some of the album’s many song-snippets on an answering machine in an almost feminine warble. People heard this album and didn’t know what hit them.

Artists like harpist Joanna Newsom, theatrical soloist Faun Fables and the string trio Vetiver began popping up on the public’s radar as well, recording and releasing stripped-down, poetic music with off-kilter lyrical takes on love and life. You might call Bonnie “Prince” Billy the spiritual godfather of this movement.

Alabama transplants Blackbright–a trio whose songs unspool like a long, satisfying yawn–kick around with the same crowd, and last January they invited these friends and musical colleagues to play a series of midwinter shows at the storied Smiley’s Saloon in Bolinas. The resulting event, called Quiet Quiet Window Lights, de-emphasized the social-butterfly aspect of live music and allowed these decidedly unsplashy musicians to properly captivate audiences. Vociferous Smiley’s regulars didn’t always adhere to the hushed tone of the evening, but that was possibly more owing to whiskey-fueled curiosity than disrespect. Somehow, it was all in keeping with the spirit of things.

This January, Brightblack again plays host to QQWL, putting together two new lineups with a total of 10 acts (not counting special guests who might show up). The spirit is the same, but there’s no denying that since the first QQWL, the indie world has sat up and taken notice. The profiles of many QQWL artists have risen enough in the past year that it’s worth noting that there are only 80 tickets available for Friday’s show at Smiley’s and 270 tickets for Saturday’s at the Bolinas Community Center. With no advance sales, that means a late arrival may not be very fashionable after all.

Besides, fashion has nothing to do with it. Make the pilgrimage to Bolinas and Quiet Quiet Window Lights not to ogle at the breaking of the Next Big Thing, but to see a group of gifted artists have fun performing with friends. Music doesn’t get bigger than that.

There’s something dark and hushed throughout Vetiver’s self-titled debut album that’s oddly welcoming. Using guitar, cello and violin, Vetiver create an anachronistic sound that’s neither modern nor old-timey–and it’s a comfortable place to be, like rereading a dog-eared book on a rainy day.

Main songwriter and singer Andy Cabic’s lullaby-soft vocals are at turns warm and mournful, depending on the context: “Oh Papa” seems to step wearily out of a haunted fairy-tale forest, while “Farther On” steeps itself in childlike wonder. Two tracks co-penned by Vetiver guitarist Devendra Banhart–the loping “Los Pajaros del Rio” and the goofily lusty “Amour Fou”–add touches of brightness to what is mostly an amber-hued record. Many listeners will recognize the gentle but enriching backing vocals of Hope Sandoval of Mazzy Star on “Angel’s Share,” though it’s unlikely they’d figure it’s former My Bloody Valentine drummer Colm O’Ciosoig contributing understated percussion on other songs.

Though Vetiver’s album isn’t remarkable, it grows increasingly inviting after repeated listens, something you can crawl into for a respite from the loud and gaudy world.