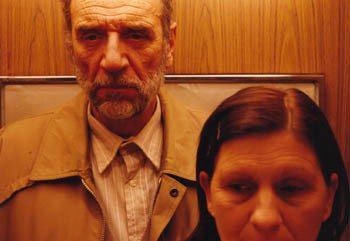 Scene From a Marriage: Andres Pazos and Mirella Pascual pretend to be married in ‘Whisky.’

Global Lens takes the North Bay on a cinematic journey

Bringing important or overlooked films to the North Bay is the first priority of the Smith Rafael Film Center. Sometimes the theater is lucky enough to book a series full of these types of films. One such extravaganza is Global Lens 2005, beginning its exclusive Northern California run at the Rafael on Friday, Jan. 21. The series, now in its second year, spotlights 10 foreign films that have been consistently overlooked for American distribution.

For those with a taste for black comedy, Global Lens brings the Bosnian film Fuse (2003), winner of the Silver Leopard Award at the Locarno Film Festival. This satire tells the story of a small Bosnian town soon after “peace” has broken out. Then-U.S. president Bill Clinton is coming for a visit, and comedy ensues as the townsfolk try to beautify and Americanize their town for their important visitor, right down to turning the local brothel into a “cultural center.” Darker, more dramatic fare includes the Argentinean dramas Today and Tomorrow (2003), about a first time prostitute and the emotional toll it takes on her, and Lili’s Apron (2004), about the dissolution of a marriage during Argentina’s financial meltdown.

Among the series’ other offerings are What’s a Human Anyway? (2004), a Turkish film about a taxi driver who reverts to a childlike state after being struck with amnesia; the 2004 Vietnamese coming-of-age film Buffalo Boy (winner of the top prize in the New Director’s Competition at last year’s Chicago International Film Festival), which uses the life cycle of water to reflect on the stages of human life; Daughter of Keltoum (2001), from Algeria, about a woman’s search for her mother among the Berbers, a people almost untouched by Western society; the heartbreaking Hollow City (2004), which follows a young boy in the aftermath of the Angolan revolution; Kabala (2002), a film contrasting ancient spirituality with modern pragmatism in the villages of Mali; and the Chinese film Uniform (2003), in which a young man’s fortune changes after he begins wearing a policeman’s unclaimed uniform.

The most hyped and award-winning film at Global Lens is Whisky (2004), a recent release from Uruguay and the official foreign language entry for this year’s Academy Awards. The story of Whisky is simple and entirely familiar. Jacobo (Andres Pazos), a sock-factory owner leading a humdrum life, asks his longtime assistant, Marta (Mirella Pascual), to pose as his wife when his successful “family man” brother (Jorge Bolani) comes to visit. This is the kind of plot we expect to find in a feature starring Julia Roberts or that adorable Meg Ryan. But this is not your typical romantic comedy.

Several clear differences in both story and style become obvious as the film progresses. The slow pacing, for example, is decidedly unlike American films. Filmmakers Juan Pablo Rebella and Pablo Stoll seem to simply enjoy using the camera. Long takes are plentiful throughout the 94-minute running time. Knowing that this is the duo’s second feature film only makes the confidence they display in this glacial filmmaking style more impressive, as they shoot drawn-out scenes of characters relaxing through a long cigarette break or leisurely employing a hot-air hand dryer.

In emphasizing their examination of the particular, Rebella and Stoll repeatedly use identical shots of the daily routine that dominates Jacobo’s life: opening his factory door, greeting his employees, fiddling with the mini-blinds. These show–in a way that could only be done by devoting precious running time to the mundane details–just how ordinary and simplistic his life truly is. A film from another culture might try to depict this more hastily, through metaphor or a hurriedly delivered monologue. But Whisky moves along naturally, at its own pace.

The choice of what to show and for how long to show it makes this film unlike anything that could come out of Hollywood. The ending is a final shock to those who have been suckled on the whiz-bang appeal of mainstream U.S. cinema. Don’t go into Whisky looking for the predictable ending; in fact, don’t hope for much of an ending at all. This is a film whose story and characters are allowed to come to their own conclusion, as simple and simultaneously unexpected as it may be.

Whisky is part of Global Lens for good reason: it shows American audiences what truly “foreign” films are like. This series doesn’t fill its space with crossover successes like Hero or countless other recent “flavor of the month” foreign art-house films. Culturally, aesthetically and artistically, these films demand to be taken on their own terms. Whisky exemplifies how different cultures can turn a familiar, even pedestrian, story into something entirely original.

All people try to work within their own environment and their own system of beliefs and ideals; filmmakers are no exception. Whisky shows us what Uruguay’s values are, both in filmmaking and life in general. To say that Whisky works as a movie–which it does–is not enough. To be worthy of Global Lens, a film must, as the series’ goals state, “promote cross-cultural understanding through cinema.” And Whisky certainly shows American audiences a culture different from our own.