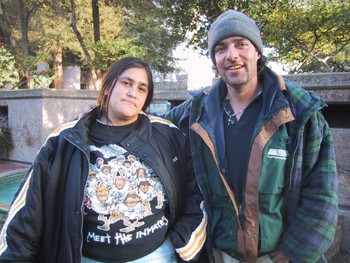 Two Is an Important Number: Diane Ortega and Roger Stephenson, who have been on the streets together for over four years, tentatively plan to allow themselves to be counted among Sonoma County’s homeless population.

Counting an entire population is no easy matter. When that population is homeless, the job becomes even harder. Nevertheless, that’s the chore facing the Sonoma County Task Force on the Homeless when it conducts a countywide census of the homeless on Jan. 26.

What makes the task force’s mission so difficult? First, the homeless aren’t necessarily easy to identify. In Sonoma County, there are many hardworking people who fit the government’s definition of homelessness–namely, anyone without legal housing of his or her own, ranging from temporarily displaced individuals crashing on a friend’s couch between apartments to the truly down-and-out sleeping in bushes and under freeway overpasses.

Secondly, because of pride, distrust and a variety of other reasons, including mental illness, many homeless people don’t wish to be identified and refuse to be forthcoming about their situation; they’d rather not risk being branded with the stigmatic label “homeless.” Therefore, many are less than eager to be counted among the county’s street dwellers and shelter residents.

According to Georgia Berland, executive officer of the task force, the average homeless individual is not a soiled, bedraggled street-person with an alarming appearance. On the contrary, he or she may be the anonymous-looking man or woman bagging groceries at the local supermarket, taking orders at a chichi restaurant or struggling through biology class at the junior college.

“People see the homeless as a type of person rather than a type of experience,” Berland says, “and the people who define homelessness that way include many of those who, by legal definition, are homeless. So it’s very hard to make an accurate count.”

The last time such a census was attempted, in the fall of 2001, a team of counters worked the streets and soup kitchens for a week, asking those who appeared to be homeless if they were indeed homeless. By the end of the week, they had counted at least 1,450 homeless men, women and children. Based on such numbers, Sonoma County’s numerous shelters and care facilities were deemed eligible to share $2 million in funds from the Department of Housing and Urban Development (HUD).

However, those who work with and advocate for the area’s homeless population have long believed that the 2001 count was low, underestimating the actual numbers of homeless in the county.

In spite of such difficulties, Sonoma County is about to try it again, undertaking its first comprehensive census of the area’s entire homeless population–and it’s going to be done in just 24 hours, beginning at 2pm Wednesday, Jan. 26, and continuing through the following afternoon.

All of the county’s homeless shelters will conduct counts of residents currently staying at such facilities, but locating people living in vehicles, camping in the woods or parks, staying with relatives or friends, or sleeping in abandoned buildings is more difficult.

With that in mind, Berland has sweetened the pot. During the census, anyone fitting the legal description of homelessness will be asked to stop by one of 14 designated locations, sited in churches and community centers in every major town in the county, where they will receive a free hot meal and various useful services, including, in some locations, free haircuts, showers and medical checkups in exchange for participating in the census.

Individuals choosing to participate are required by HUD to complete a short, anonymous survey, answering such questions as “Where did you sleep last night?” Neither names nor Social Security numbers will be recorded. More goodies are offered for those who complete the two- to five-minute survey, including blankets, coats, hats, sleeping bags and other winter survival gear, as well as books and toys for children.

“We are using this opportunity to gather important data,” Berland explains, “identifying whatever issues and whatever people are here within the unsheltered community. We’ll get that information and feed it back to local jurisdictions who make determinations about how to best serve this particular population.”

Though Berland expects this count to be far more accurate than past attempts, she does not expect to reach everyone in 24 hours. “That’s the time that HUD has given us, just 24 hours,” she says, “and our research shows us that it will be impossible to get a completely accurate count in that time. A lot of people we won’t get to. A lot of them don’t want to be reached. We’ll just have to do the best we can.”

The Sonoma County Task Force on the Homeless will have a head count station in each of the 14 major towns in the county. In Santa Rosa, the Unitarian Universalist Congregation, 547 Mendocino Ave., will be open on Jan. 26 from 2pm to 7pm. On Thursday, Jan. 27, the Community Church of Sebastopol, 1000 Gravenstein Hwy. N., offers a hot meal and hot showers between 9am and 2pm. That same day, the Petaluma Kitchen, 330 Payran St., has a special head count from 11:30am to 1pm. For a complete list of available centers, information on how to help or how to get help, call 707.575.4494.