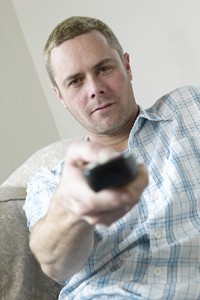 Remote, Control: Getting off the couch may be the biggest hurdle.

Five minutes into the first StairMaster routine I’ve done in months, my calves, thighs and buttocks scream bloody murder. My lungs rasp and wheeze trying to catch a breath. Cramps in both arches agonizingly contort my feet. A voice in the back of my head whispers that I cannot go on. Failure appears imminent.

It wasn’t always like this. For the past decade or so, I’ve been somewhat of a gym rat, working out at least three days a week on a continual basis. I’ve pumped iron, ridden stationary bikes and paid close attention to my diet. The effort paid off, slimming my waist to a Seinfeldian 32 inches. Then it all went to hell.

Ironically, the same thing that brought me to the gym 10 years ago–a severe lower-back injury–took me out of action some four months ago. Wisely, I stayed out of the gym while recovering from the injury.

Normally, I’d be eager to return as soon as possible. But as one week rolled by and then another, the urge to work out that I’ve cultivated for years never returned. I’d lost my motivation.

The results were disastrous. By New Year’s Day, I’d gained 25 pounds and my waist had ballooned to a pregnant 37 inches. Healthy eating habits fell by the wayside, replaced by my new favorite snack: sweet-and-sour gummy worms. Seemingly overnight, I’d morphed into the sort of pathetic, fat fool I’d always hoped to avoid becoming. Even worse, I could have cared less. My mojo was gone, totally kaput.

Which of course puts me in the same boat with just about everybody else who made a New Year’s resolution to get fit and healthy in 2005. Sure, it sounds like a good idea, but figures for the health-and-fitness industry show that up to 80 percent of those who make such resolutions fail to follow through on them. The primary cause for this massive failure rate? Lack of motivation. The question is, with so many people failing in their attempts to get in shape, how can such motivation be obtained and sustained? With my own lack of mo’ heavily in mind, I called personal trainers throughout the North Bay to discover how the experts keep their clients going.

“Motivation is about learning to love yourself enough to take care of yourself,” says Diana Stowe, personal trainer and co-owner of Fem Sport Private Fitness and Weight Training in Santa Rosa, which caters exclusively to female clients. “The number one drawback is low self-esteem. People don’t believe they’re worth taking the time out to care for.”

Scott King, a personal trainer who works out of Sebastopol’s Coach’s Corner and Life Force Fitness in Healdsburg, states the same concept differently. “The common denominator for success is making fitness a priority,” he says. “Saying that you don’t have enough time to go to the gym is another way of saying you haven’t made it a priority yet.” Or saying that you don’t love yourself.

Those who continue to insist they just don’t have enough time to work out may be surprised to learn that high intensity weight training techniques such as “super slow” can produce significant results with just three 20-minute workouts per week.

“My clients show up every single week, because they know it’s only for 20 minutes,” claims Wes Hardy, a personal trainer and owner of Executive Fitness in Santa Rosa. Of course, considering that a single repetition of a super-slow exercise can take as long as 30 seconds–both the positive and negative movement are exaggerated, putting extreme stress on muscle fibers–those 20 minutes can be fairly excruciating. Afterwards, Hardy says, some clients have to “lie down and throw up.”

Often, says Clark Marchwordt, trainer and owner of the Fairfax Gym in Fairfax, it takes a health scare such as a heart attack to bring individuals into the gym. “Motivation comes from when you’ve reached that point where enough is enough,” he says. “I’ve got a lot of clients who are basically having a midlife crisis.”

It’s worth pointing out that if one can learn to love one’s self early on, before the aging process sets in, such health problems can be avoided, or at least postponed–a significant motivator in and of itself.

Going for the Goal

Once the decision to get in shape has been made, realistic goals must be set.

“A lot of people enter this process with a vague goal,” says King. “A vague goal will get you vague results.”

When personal trainers talk about setting goals, they have two time frames in mind, short-term and long-term. Most people start fitness programs because they’re interested in the long-term goal of looking and feeling better. Because it can take as long as six months before significant results manifest themselves, short-term goals such as the number and type of exercises to be performed on a daily and weekly basis must be clearly drawn out to keep an exerciser motivated.

In order to set these goals, a base measure of a person’s current physical state must be established. This is where the realism comes in.

“If a client who is 5’11” and 130 pounds comes in and says he wants to look like Arnold Schwarzenegger, I’m going to tell him to get real,” says Hardy.

Technology has greatly simplified setting realistic baselines. Nowadays, anyone can purchase a scale capable of measuring not only weight but body fat percentage. Computers are used to create workout schedules as well as nutrition charts. At Expertec Health and Fitness Center in Napa, clients use a computer program called a Visual Fitness Planner that generates virtual 3-D images of their before and after bodies.

However, for old-school trainers such as Marchwordt, the eyes still have it. “Standing stark naked in front of the mirror,” he says. “That’s a reality check!”

Whatever method is used, it’s important to believe that movement toward a goal is possible.

“One of the most common mistakes people make is that they try to go from zero days of exercise per week to working out six days per week, all at once,” says King. The problem seems to be particularly acute in men, who are often driven by their egos rather than common sense.

Such advice also applies to nutrition. Too often, we follow unrealistic models, whether it be exercises that are too strenuous or diets that are simply too rigid to tolerate for any length of time. It’s important that an individual’s short-term goals be doable, lest the long-term goal of health and fitness be abandoned out of frustration. Knowing when to reward yourself for accomplishing a short-term goal is key.

“I work out so I can eat,” Marchwordt says. “And I’m not gonna buy some diet steak–I’m gonna get the most beautiful marbled rib eye you’ve ever seen!”

Reward yourself. Easy does it. Sound advice, even though it’s not necessarily the easiest to follow. That’s why there’s a demand for personal trainers–to provide motivation to those who can’t find it within themselves.

Five minutes into my first StairMaster routine in months, gasping for air like a beached fish, I wonder where my motivation’s gone. “Easy does it!” I think, and reach over to turn the speed down from 10 to five. Breathing easier, I complete my 15-minute workout, one small step closer to finding my mojo again.