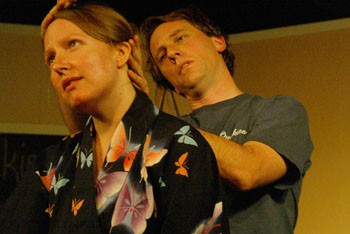 Theater gets fast and furious in ‘Quickies’

Pop quiz: What do an amorous navigational computer, a heartsick college professor, a lost army patrol, and a couple of oppressed potato sorters have in common? Answer: They’re all part of “Quickies,” the fifth annual festival of short plays at Actors Theatre.

By now, many North Bay theatergoers know the drill. Every year, AT harvests a bumper crop of new works by emerging playwrights from across the country. The plays are comedies or tragedies or both or neither. They’re complicated dramas, straightforward sketches, homages to the classics, or cutting-edge experiments in stagecraft. What they have in common is extreme shortness: Each play works whatever magic it has to work in 20 minutes or less.

This time out, the festival is organized like a restaurant menu. Every night, guided by vague but intriguing descriptions, the audience chooses seven plays from a list of 14 works. A small strike-force of actors (working with four different directors) then mobilizes to bring the selections to life.

Among this year’s best offerings is Johnny Hong Kong, playwright Kate Walat’s humorous yet slightly disturbing exploration of the relationship between a manic little boy and his beleaguered mother. Walat’s play (directed by John Warren) perfectly captures the peculiar poetry found in the language of little kids: “Did you ever think what would happen if all you ever did was sit all day and think and think and think?” Johnny asks the audience.

Also excellent is Am Lit or Hibernophilia, Dan O’Brien’s story of a widowed American college professor trying to recapture his lust for life by moving back to the Auld Sod. Desperate to escape his illiterate students and the ghosts of his American past, the prof writes e-mails to old friends in Ireland: “If you don’t get me this job, I’m going to blow my fucking brains out. Sideways winky smiley face.”

Perhaps the biggest surprise of the night is Down. This dramatic encounter between an old man and his grandson could have been a dreadfully bad movie-of-the-week-style play about assisted suicide. But playwright Janet Kenney’s knack for dialogue makes Down both witty and genuinely moving.

Of course, “Quickies” is not just a showcase for playwrights. Consider that a mere seven actors have the Herculean task of bringing these diverse plays to life. Slipping in and out of so many roles on such short notice could bring out the best in an actor–or the very worst. The AT ensemble meets the challenge head-on and achieves generally positive results, though not everyone had fully mastered their lines and cues by opening weekend.

Amy Pinto achieves just the right mix of wide-eyed wonder and teeth-grinding frustration as mother to the title character in Johnny Hong Kong. Scott Wagman’s knack for physical comedy allows him to make the most of The Deluxe Option, an offering from playwright Dennis Jones that is generally funny even though it borrows at least one of its jokes from a cell-phone commercial.

But the standout performer is Brent Lindsay, who manages a seamless transition from the heartbroken college professor of Am Lit or Hibernophilia to the manic five-year-old of Johnny Hong Kong to the lustful farm boss in the Flannery O’Connor-flavored Potato Girl to the dying grandfather in Down. No one onstage comes close to matching the astonishing intensity Lindsay brings to each of these roles.

In fact, if anyone needs one simple reason to sample this complicated array of plays, Lindsay is it.