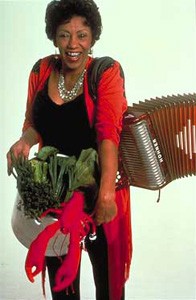 Out of the Frying Pan: Ida Guillory, also known as Queen Ida, makes it spicy.

Queen Ida cooks up a spicy gumbo of zydeco hits

Call it the spice of life. It’s been more than a decade since Ida Guillory released her popular Creole and Cajun cookbook, Cookin’ with Queen Ida, a mouth-watering collection filled with traditional Louisiana staples like gumbo, jambalaya, boudin pork sausage, shrimp Creole, and crayfish étouffée.

But the 74-year-old Daly City author and award-winning bandleader, best known for her highly rhythmic variation on Cajun music, is still cookin’ up a storm, onstage instead of in the kitchen, with one of the hottest zydeco combos around.

Her patented musical gumbo is flavored with such far-flung ingredients as New Orleans R&B, Latin salsa, country and western, West Coast jump blues, Tex-Mex, and sensual Caribbean rhythms. “For the most part, we do hang with the standard zydeco songs,” she says, “but once in a while you say to the audience, ‘Here’s a treat, here’s something a little bit different.’ Since zydeco is a blend of music from all walks of life, you sort of mix them all in and hold on to your roots.

Clearly, Guillory has hit upon a winning recipe. A closet accordionist who went public nearly 30 years ago, she has become one of the world’s leading exponents of zydeco music. The first female to lead a zydeco band, she has recorded a dozen albums under the moniker Queen Ida and Her Bon Temps Zydeco Band. Four of those were nominated for Grammy awards; one album won.

As a child in Lake Charles, La., and later in nearby Beaumont, Texas (part of the so-called Cajun triangle), Guillory was surrounded by accordion music (her mother taught Ida to play) and French-speaking Creole and Cajun culture. In those days, she also specialized in cooking for 30 to 40 farmers before the ebullient sound of accordions and fiddles and rub boards and harmonicas came out at night and filled the humid air.

“During the annual Mardi Gras festivities, the kids would holler, ‘Hey, la bas!’–the traditional call and response for ‘Hey, you over there!'” she remembers.

After World War II, Ida left Beaumont, where she had worked driving a tractor on her father’s rice farm, and moved to San Francisco. In 1947 she married Ray Guillory, an old friend and an airman at Travis Air Force Base in Fairfield.

For 14 years, Guillory raised three children and worked as a school bus driver. She soon began sneaking the accordion on to the bus whenever she took the kids on field trips. “I’d park the bus way far away, get the accordion out of the luggage compartment, and play,” she recalls with a laugh. “No kidding, that’s how I really learned to play: practice, practice, practice. I had plenty of time and no distractions.”

In 1975 Ida’s brother invited her to sit in with his band before a packed house at the All Hallows Church in San Francisco. “That’s how I started,” she adds, “with all those butterflies in my tummy.”

The crowd loved her. A writer for the now defunct California Living magazine who was in the crowd that night dubbed her Queen Ida.

Two years later, she quit her bus driving job and never looked back.

“The most rewarding part of it is just seeing how the people enjoy the music, the smiles on their faces,” she says. “We give and they return the energy. And, believe me, there’s a lot of energy that goes into this music.”

Queen Ida and Her Bon Temps Zydeco Band perform on Thursday, July 24, at 8pm at the Sonoma County Fair, 1350 Bennett Valley Road, Santa Rosa. The concert is included with the admission cost of the fair. 707.545.4200.