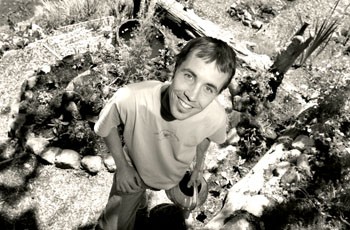 Making Waves: Trathen Heckman’s sustainability tours spread the good word about what locals are doing to live light on the land.

Reading about straw-bale construction in a magazine can be inspiring, and hearing a story on the radio about organic waste composting can spark some interest. But it’s much easier to get geared up about concepts of sustainability when you can actually see people putting them into action, and can look and feel and touch and smell and ask questions.

It’s that concept–seeing is believing, and maybe even a little bit more–that propels the Sustainability Tours organized by the group Daily Acts. Since the first tour last year, folks have seen how biodiesel is made, nibbled on organically grown medicinal herbs, and gotten their hands dirty putting in sheet mulch–all viable options that can be easily implemented into our daily lives.

The magical but hardly mysterious tours began last May, spearheaded by Trathen Heckman, whose inspiration had come from an article he read about a bike tour in Berkeley where participants pedaled from one instructional site to another to see volunteers demonstrate sustainable-living practices.

The tour brought many people in contact with new ideas, but it only scratched the surface of the sustainable efforts already going on in the North Bay. So this year, Daily Acts didn’t just reprise last year’s tour, they put together a whole series of tours, each with a specific focus: green building, agriculture, community.

“The idea is to use the style and approach of last year’s tour,” says Heckman, “but expand it and do a series of six to 10 different tours, highlighting everything from green and natural building to permaculture, farms, veggie vehicles–all of it.”

Each tour visits three to four locations, and if driving is necessary, roughly 70 percent to 80 percent of the transportation furnished is through vehicles using alternative energy–hybrid cars and vehicles converted to run on biodiesel and vegetable oil–creating an additional demonstrative resource for participants.

A walking tour through Sebastopol on May 31 wove together three examples of urban dwellers working both independently in their homes and together as a community to make sustainability happen on small and large scales. Led by Erik Ohlsen, a cofounder of the RITES Project who was involved with last year’s tour, the day began in Ohlsen’s backyard garden, which calls on permaculture principles for a distinctly suburban setting.

The tour then proceeded downtown, where Green Party mayor Craig Litwin led the group in sheet-mulching one of the pesticide-free flower beds in front of the police station. The afternoon concluded with a visit to the site of the Sebastopol Community Garden and the proposed sight of the West County Skateboard Park and permaculture garden project.

Heckman, whose impish grin radiates contagious enthusiasm, has seen the tours, particularly the green building tour, draw crowds with all ages represented. One woman, who was present at last year’s inaugural tour on May 25–which happens to be her birthday–showed up for this year’s “Green Building Tour” with her three twenty-something sons in tow. “She’s making it a regular birthday event,” Heckman says.

Most recently, June 29th’s “West County Delight” brought participants to the Occidental Arts and Ecology Center for a “Brock Walk” with Brock Dolman, and then to Taylor Maid Farms to hear Michael Presley. The tour’s finale was Heckman’s own Monte Rio house, an inspiration in itself with its terraced gardens, which Heckman has been reclaiming from the perilously steep hillside for two years.

“Each tour, people have been beyond satiation,” says Heckman. “We’re actually going to scale them down to three sites, because it’s such an overload of good stimulus. And as well as introducing people to all of the great sites, we want to have the space and the time built into the tours for people to just connect.

“In the total five tours we’ve done, we’ve visited 19 locations, ranging from individual backyards to county officials to nonprofits to farms to businesses. Just a really wide range of organizations and groups we’ve pulled in.” About 160 people have attended the tours so far.

Participants receive a copy of a resource list and a “magic seed ball,” an orb of clay, about the size of a large marble, containing native plant sees which you can toss out into the woods during a walk or even from the window of your car. They also get to take home a copy of Ripples, a journal which Heckman produces for Daily Acts that’s infused with a casual, positive tone and filled with easy-to-apply solutions and meditations on striking a sustainable balance in our lives.

“The sustainable ag program is fairly new, it’s kind of in its infancy. Over the last five years it’s been developed,” Mendes says. “We use the Shone Farm as an outdoor laboratory for hands-on instruction.”

The farm, which is on River Road in Forestville, about 10 miles from the SRJC campus, has 120 acres of forest, 60 acres of vineyard, and a 5-acre organic market garden, as well as a 1-acre food-pyramid garden that represents all the food groups.

For sites like Shone Farm, participation in the sustainability tours can help get the word out about their programs, which many people might not be aware of otherwise. “It’s grown steadily, but I think there’s a lot of people who don’t know it actually exists,” Mendes says of the sustainable agriculture program. “It’s kind of been word-of-mouth. It’s been really exciting to see the program grow. There’s always more room for it to develop even further, though. I think the tour will be a good opportunity to show some people what we’re doing.”

New July tours and August tours are in the works, with ideally one tour a month over the next four months. “On one end, we’re getting more people in the community involved, and raising the ecological literacy, and then we’re drawing new folks in,” says Heckman. “On our end, you have these people who are working really hard to make it their livelihood. And they need more support, and they don’t often have the time to get the recognition. So we’re better linking up our own sort of green networks.”

The next tour, set for July 26, tentatively includes the California School of Herbal Studies, Laguna Farm, and the Food for Thought AIDS food bank. Closer toward winter, the tours will have less of a gardening focus and more of a slant toward watersheds and green building–a topic that can withstand inclement weather.

Most of this year’s tours are designed to be done more than once. “By doing the same tours, it’s easier logistically to have as many as 15 or 20 tours, if it comes together well,” Heckman says. “The idea is to create a strong framework and base to grow the tours and have them everywhere in the county by next year, with lots of folks involved . . . and to also set it up as a model that can be duplicated or used in other counties and states.

For questions or reservations for the ‘Food, Medicine, and Wonder Tour’ on Saturday, July 26, or the ‘Green Building Tour’ in late August, send an e-mail with contact information to [email protected], or mail to Daily Acts, P.O. Box 826, Monte Rio, CA, 95462. Cost per tour is on a sliding scale of $20-$50, with no one turned away for lack of funds.