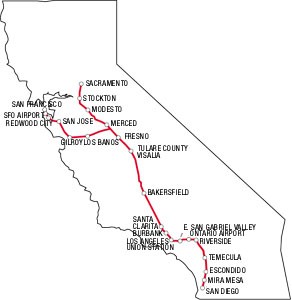 Where It Will (and Won’t) Go

Although a final route hasn’t been selected yet, the high-speed rail line would serve all of the state’s major population centers.

From San Diego, trains will speed north to Los Angeles and Bakersfield and Fresno. Near Merced, the route will split: One track will continue north through Stockton to Sacramento, the other to San Jose and a downtown San Francisco terminus.

Though Oakland lobbied extensively for service, if the East Bay does get a high-speed line, it is likely to come only later in the development of the system, or in the form of a faster conventional rail line. Orange County is in the same boat.

However, on top of dedicated high-speed rail, the authority also hopes to upgrade service on two other busy corridors by helping to plan and finance faster, more frequent service. The conventional rail service on the San Jose-Oakland-Sacramento line and the coastal Los Angeles-San Diego route, both busy and growing today, would be targeted for upgrades under the plan.

The busiest high-speed rail station, Los Angeles Union Station, would serve 9 million passengers per year, and may be connected to Los Angeles International Airport. Today, LAX is the third busiest airport in the world, serving 68 million passengers a year, and may hit 100 million by 2010. Though SFO would be served by a high-speed rail stop in Millbrae, LAX is miles away from downtown LA and nowhere near Union Station.

While it’s essential that Union Station and LAX be linked, and governmental and business groups are already studying how to make it happen, the link will likely be eliminated from the study in November. Local agencies may instead build their own cross-town links.