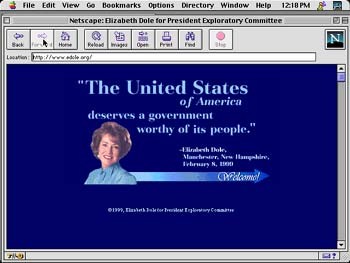 Presidential hopefuls pitch their wares on the Net

GOV. GEORGE W. BUSH wants you to know that he’s all for prosperity–guess he isn’t counting on the pro-poverty vote. Liddy Dole just made the first college commencement speech in cyberspace–look out, Al Gore. And Dan Quayle wants to go back to the future–in this case the 1980s–to “resurrect the Ronald Reagan vision of government.”

With the 2000 presidential campaigns underway, just about every presidential aspirant has come up with his or her own campaign website that attempts to be worthy of the new millennium. Here’s a sample of what these contenders have to offer on the Internet.

Al Gore
This pitstop on the information superhighway does justice to the man who recently claimed he invented the Internet. This site has it all. Vice President Gore also wins the contest for the flashiest logo, which features some sort of shooting star cascading over his name. Gore’s site even has an area to view the latest “Gore gear,” so you can buy the denim shirts, jeans, and faded caps that scream “Al Gore!” The site incorporates user surveys and an interactive town-hall meeting and is available in Spanish. It profiles his issues well and demonstrates that this guy’s campaign has its act together. But what’s up with the appeal to faith-based organizations? An obvious attempt to court the same conservative elements to which Dan Quayle is reaching out.

Bill Bradley
A nice, congenial website that reflects former ex-basketball star and ex-U.S. Sen. Bradley’s nerdy persona. Slightly disturbing is a picture of Bradley’s rounded face pasted on a campaign button that hovers over the page. Bradley, an advocate for campaign finance reform, allows the user to view all of his campaign finance reports. Somewhat tasteless, though, is the sudden solicitation for a contribution while you view them.

George W. Bush
This isn’t his presidential campaign site, it’s the website of the “George W. Bush Exploratory Committee Inc.” Despite the fact that Bush has raised over $7 million, he’s still not sure if he’ll run (yeah, right). The site contains speeches by and video clips of Bush and emphasizes “education,” “values,” “responsibility” and “prosperity.” All that’s missing is “mom” and “apple pie.” Although the site rattles off his gubernatorial accomplishments, it is noticeably devoid of any discussion of issues that may arise on the campaign. Where are abortion and foreign policy? Is this site a preview of what to expect from Glamorous George?

Steve Forbes
This is probably the coolest political website around, reflecting a guy who can buy the best. Remember, billionaire publishing tycoon Forbes announced his candidacy on the Web. It’s updated daily with stories about Steve, the rich cyber-geek that he is. The site does a good job in graphically highlighting Forbes’ innovative policy stances like the flat tax. The Forbes site has a special area and log-in for leaders of e-precincts. The e-precinct leaders bring other online users to join the campaign.

Dan Quayle
Dan Quayle is no dummy, or so he’d like you to think. The Quayle site is full of issues, opinions, and strong stances on the issues, like “Quayle challenges ‘arrogance’ of Gore’s environmental policy.” Taking on Gore so strongly probably means that Quayle is trying to assert himself as the “I’m fed up with Clinton/Gore” guy. This site is one of the few that really explores the campaign stances of the candidate. For instance, Quayle’s tax reform proposal is filled with figures, percentages, and details that were noticeably absent from, say, George W. Bush’s site.

John McCain
This U.S. senator and former POW posts a website that’s very straightforward. But there is an obvious effort to lighten up the chief critic of Clinton’s foreign policy with some cutesy pictures of the candidate. The site highlights McCain’s tough foreign policy positions. McCain smartly uses an online questionnaire about Kosovo to substantiate his views. But like McCain’s, the site is weak on issues outside of foreign policy.

Elizabeth Dole
This is a website that pays homage to Martha Stewart with its blueberry background and sea-green highlights. It is filled with positive quotes, and Web surfers are greeted by her most famous line, “The United States of America deserves a government worthy of its people.” This is a site that tries to appeal to women and talks a lot about families and the inspiration that is Elizabeth Dole. Yuck! She doesn’t mention that husband Bob Dole last week announced he may contribute to a rival campaign (yes, Liddy quipped to the press that she sent her hubby “to the woodshed” after that remark embarrassed her campaign). On the other hand, she lets you know that she supports a taxpayer bill of rights, commends the U.S. Senate for passing anti-gun legislation, and wants even tougher gun laws. Otherwise, there’s a whole lot of soft-sell bluster about, you guessed it, Liddy Dole.

Rep. John Kasich
This is about the worst political website I’ve seen in a while. The red, white, and blue motif is so overdone you think that “It’s a Grand Old Flag” should play when you enter. The site has a section called “Who’s Your Hero?” where Kasich profiles a guy who is involved in the community and has become one of Kasich’s heroes. Not coincidentally, the guy is featured holding a copy of Kasich’s new book, Courage Is Contagious.