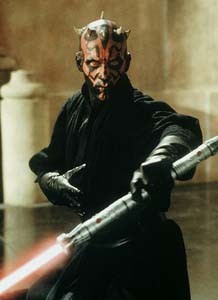 Writer David Templeton takes interesting people to interesting movies in his ongoing quest for the ultimate post-film conversation. This column is not a film review; rather, its a freewheeling, tangential forum on life, alternative ideas, and popular culture.

1977 WAS A very good year for Terry Brooks. The young attorney watched his very first novel–the colorful fantasy epic The Sword of Shannara–make its way up the bestseller charts, then stay there for a remarkable five months. That would have been enough to make anyone’s year. But there was more: within weeks of Shannara‘s release, Brooks experienced a second life-changing event that he’d had no way of anticipating.

It was called Star Wars.

“I was living in a small town in Illinois,” he recalls. “I saw Star Wars right away, and was, to say the very least, amazed.”

1977 also turned out to have been a good year for the fantasy genre. Coupled with the resurgent popularity of J.R.R. Tolkien’s Lord of the Rings and the noisy emergence of the Dungeons and Dragons role-playing movement, Star Wars and Sword of Shannara arrived just in time to bask in a kind of fantasy renaissance.

“As far as publishers and studios were concerned,” Brooks explains, “until Star Wars and Shannara, there were no expectations for fantasy. At all. There was only Tolkien, and nobody could do Tolkien but Tolkien. The Lord of the Rings was a fluke, publishers thought, and it would never be repeated again.”

Brooks, who now lives in Seattle, went on to write seven Shannara sequels–he has over 12 million books in print–and has set a record as the first author to write 14 consecutive bestsellers. In a sense, is newest work brings him full circle back to where he began; it’s the novelization of Star Wars: Episode 1–The Phantom Menace (Del Rey; $25), a fitting match for Brooks, whose skillful exploration of outrageous otherworlds is perfectly suited to George Lucas’ mind-boggling visions.

Ironically though, Brooks has only recently seen the movie on which his novel is based.

“I had to whine a lot before anyone at Lucasfilm would let me see the movie,” he admits with a warm guff of laughter. “So I saw the film at an advance screening–and let me tell you, it takes something away from the film when you’ve just written the novelization of the screenplay. I spent my entire time critiquing what I’d done, comparing it to the movie. It was more like editing a book than the typical movie-going experience.

“So now that that’s out of my system, I’ll have to go see it again.

“What was interesting to me,” he relates, “was to see the reactions of the people. They varied considerably. The young kids in the audience, they loved it. They got very excited. They clapped and they cheered. And the older people who looked like they’d come directly from truck driving or something, they got into it pretty well, too.

“The ones who seemed more standoffish and reserved were the ones in suits, the more sophisticated people, the lawyers and the doctors and what-have-you–of course I’m generalizing here–but those were the ones that seemed to stand back and go, ‘Hmmmm.’ ²

“Was that a reaction they were having to The Phantom Menace,” I wonder, “or was it a response to fantasy in general?”

“Well, that’s a very interesting question,” Brooks replies. “And I don’t know the answer. There’s certainly a large group of people out there who trivialize fantasy, whether it’s fantasy as literature or fantasy in the movies. I’ve been fighting that war for years. A lot of people still view fantasy as a lowbrow form of art, not worthy of a lot of time and effort. Which is another one of those grand stereotypes that is, you know, a lot of bull.”

“Yet Tolkien is still considered great literature,” I counter.

“Yes, but people have it pounded into their heads that Tolkien was an English don working with history and language,” Brooks suggests. “So his scholarly background thereby legitimizes, to some extent, what he was doing in the fantasy genre. And we’ve all heard the rumors that The Lord of the Rings is actually an allegorical study of everything from World War II to the evolution of mankind. That’s lofty enough to raise anything above the slums of standard fantasy fiction.”

“Are you saying,” I ask, “that we’re becoming too sophisticated for fantasy?”

“No, I don’t think so,” Brooks replies slowly, mentally chewing this idea over before committing to an answer. “I think that fairy tales and myths are so much a part of our growing-up process that we can never get away from it completely. But I think maybe we spend too much time trying to convince people that what we are reading is worthwhile.

“I have a theory that I picked up–well, I stole it, actually, from John Edgar Wideman–that as a populus we have devalued fiction in general, and that now we think that the only thing that is really worth reading is non-fiction, or at the very least fiction that is ‘based on a true story.’

“Somehow, if we can’t tie it to the real world, in concrete terms, it doesn’t have value.

“Good things don’t just come about. They come about because someone dreamed it. I think we all need a dose of Star Wars right now, to remind us that, as long as we can continue to imagine, we can continue to grow, to advance, to evolve. Because to stop imagining is to stop, altogether.”