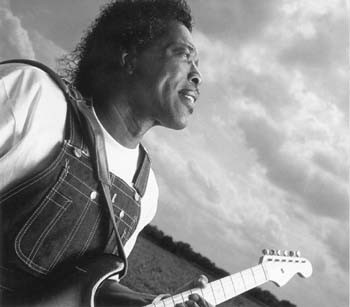 Hey, good Buddy: Even Jimi Hendrix worshipped at the feet of Buddy Guy .

WHEN BUDDY GUY began his music career in the late 1950s, he couldn’t imagine himself being put on the same level as blues stars like Muddy Waters, Howlin’ Wolf, and B. B. King. Indeed, Guy remembers himself as someone who took years to come out of his shell–a fact that may surprise anyone who has seen Guy, an electrifying guitarist with a magnetic onstage personality and blistering chops. “I was so shy I wouldn’t talk to nobody,” Guy recalls. “Muddy helped me out a lot with that. I was like, I’ve got a little talent, but I’m ashamed to show it. And I think what held me back a lot is I don’t have an education. My mama had a stroke and I had to drop out of my first year of high school and I was always afraid I was going to say the wrong thing and I didn’t know how to explain myself. I just said, well, I know how to do that.

Today, Guy is making more noise than ever. The native of Lettsworth, La., is a 40-year veteran of the music scene, having arrived in Chicago in 1957. And while he was part of the famed roster of the Chicago-based Chess Records, cutting several albums of his own while serving as a valued session guitarist for artists like Waters, Wolf, Little Walter Jacobs, and Sonny Boy Williamson, and recording a string of cult classics with former sidekick and harmonica ace Junior Wells, only in the 1990s has Guy seen his career generate significant momentum.

After spending most of the 1980s without a recording contract, Guy signed with Silvertone Records and released three straight Grammy-winning studio CDs. In 1996, he added an acclaimed live CD, The Real Deal, to his catalog, followed last year by the studio CD Heavy Love. Songs from each of those CDs are included on Buddy’s Baddest: The Best of Buddy Guy, a recent 14-song collection.

As Guy–who performs June 9 at the Phoenix Theatre in Petaluma–has returned to a busy schedule of recording and touring, praise from such guitar heroes as the late Stevie Ray Vaughan and Eric Clapton (who proclaimed Guy “by far and without a doubt the best guitar player alive”) has helped Guy gain recognition as one of great talents of his generation. But over the years, he has influenced dozens of players, including Clapton, Vaughan, Jimi Hendrix (who used to attend Guy’s shows as often as possible in the 1960s), and, more recently, blues wunderkind Johnny Lang, with whom Guy has recorded and toured.

Despite such praise, Guy remains a soft-spoken and highly gracious man. He still downplays his talents next to legends like Waters or B. B. King, both of whom took Guy under their wing after the young guitarist arrived in Chicago.

“I went to sleep and I was a young guy listening to Muddy and them,” Guy says, recognizing how quickly the years have passed. “And you wake up, and now the young guys are looking at me just like I did with Muddy, and I’m very proud to be able to sit there and talk to them like he did with me. But those shoes he wore, ain’t none of us who will ever be able to wear those shoes. They’ll be there for a long time.”

SUCH respect shown, Guy now eagerly embraces his leadership role in the blues. He openly talks about wanting to expand the audience for blues and open up new opportunities for the artists who will follow him.

“What I’m trying to achieve now is more recognition for the music that we play, not just what Buddy Guy plays,” says the guitarist, whose boyish face and easy smile make him look many years younger than his age of 62. “If I can expose this music a little wider than what it is, some people are going to know more about this music than they knew before they got a chance to hear me or hear some of the questions I answered for you. Because I’m not going to let the names of Muddy Waters, T-Bone, and Lightnin’ Hopkins die.

“That’s what I’m working on very hard now,” Guy said. “If I don’t achieve it, I would like to leave the road half blacktopped, and maybe someone else might see the other end and say, ‘You know, I’ll carry this on because Buddy almost got it across. I’ll fix it where you can go on across.’ I would be happy with that.”