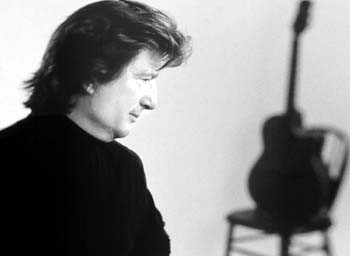 Singer/songwriter Chris Smither reflects on the dark side

NOBODY DOES SAD like Chris Smither. Case in point: a four-minute exercise in despair called “No Reward,” from 1993’s Happier Blue (High Tone). “There’s a line in that song I got off CNN, just a wretched, miserable story about some guy who killed his son–a little boy–in some horrible manner,” he explains. “A reporter was poking a microphone in his face and asking, ‘What do you have to say for yourself?’

“The guy looks up and says, ‘Well, I did it. I didn’t mean to do it, but it happened.’ Then he shook his head and said grimly, ‘It’s just a bad day all around.’

“I was stunned by the enormity of that understatement–that line just haunted me.”

His ninth and most recent CD, Drive You Home Again, is filled with the same kind of mini-morality plays, intensely personal ruminations on life and loss, hope and heartache. His last few CDs have drawn rave reviews and led to comparisons to such country bluesmen as John Prine, Ry Cooder, and Townes Van Zandt. And even if Smither isn’t a household name, his songs may have a familiar ring: Bonnie Raitt has recorded his “Love You Like a Man” and “I Feel the Same.”

“As a songwriter, he is unparalleled,” the Detroit Metro News once opined. “His tunes inhabit a space which exists between the raucous joy of light and life and a darkness so profound, one wonders how he ever lived through it.”

The key, says Smither, is redemption.

“I’m in the redemption business,” he explains, during a phone interview from his west Massachusetts home. “That’s what all my songs are about. I’ve gotten to the point now that I’ve come to realize I don’t control these guys I write about. I used to think I created them–now I just think I woke them up. I chase around behind them for a couple of weeks with a pencil and a piece of paper and I record what they do, but I don’t make them up.

“If I made them up, people would start thinking that they’re me, and I can’t really afford to have that happen.”

IT’S BEEN A LONG, slow climb for this New Orleans native. In the mid-’70s, a pair of obscure Poppy recordings earned Smither a solid cult following and a major label deal. But Smither’s star faded when United Artists dropped him, along with half its roster in a corporate shuffle. Fueled by a serious drinking problem, Smither started a rapid slide into a dark abyss that nearly ended his musical career.

“At the time, it was cataclysmic, though the United Artists deal wasn’t nearly as frustrating as half the personal problems I had,” he recalls.

In 1978, Smither turned his back on the music industry. He quit recording and touring. The musician got a construction job–pounding nails instead of plucking steel strings–and played only occasional local nightclubs.

“You get to a point where drinking takes over your life and you can’t do anything else,” he says. “I don’t know why I stopped, to tell the truth.

“I got out of it because I felt like I was dying.”

Smither sobered up and in 1985 recorded a solo album, It Ain’t Easy (Adelphi), which he calls “a dying gasp of the old me.”

Four years later, he hung up his tool belt for good and resumed touring.

THESE DAYS, Smither is a roadhouse philosopher extraordinaire. “Yes, it most certainly is true–it’s hard to get away from,” he says with a laugh when asked if he’d agree with Henry David Thoreau that most men live lives of quiet desperation.

“But to tell you the truth, most of my songs are very hopeful. They’re not Pollyannaish–they’re not unreasonably hopeful. I really do think that most of them are about redemption of some sort or another. Or a hard-learned truth. I mean, the experience that goes into learning the things that the songs are about is almost all sad, but the actual knowledge that you come out with is pretty encouraging in the end.