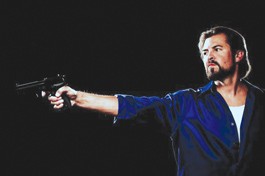 Dan Saski is one of two actors double-cast as Tony, in a production where all actors are double-cast.

In a garbage-strewn, rat-infested room in a derelict Brooklyn apartment, two petty criminals are hiding out after a Halloween-night drug deal gone terribly wrong. Billy “Torch” Murphy is sick, bleeding and terrified. Mike Leon, known as “20/20” for his ability to see details that escape others, can only see one way out of this particular jam—by reaching out to his childhood friend (and one-time prison cell mate) Tony “the Tiger” Lee, who long ago traded his life of crime for a wife, kids and a laundromat business. The result, as conceived by playwright Laurence Fishburne (yep, that Laurence Fishburne), is a savage battle of wits, emotions and tenuous family bonds that plays as part mystery-thriller, part slice-of-life drama and part hip-hop tone poem. It’s the kind of play—edgy, risky and raw—with which Narrow Way Stage Company first established its reputation as the bold, ballsy new kid on the block. Founded in 2005, Narrow Way has proven itself willing to tackle almost anything, injecting an intense, fearless, occasionally scattershot energy into subjects ranging from bedroom farce to Shakespeare. With Riff Raff, presented by Sixth Street Playhouse as part of its ongoing “guest artist” series, Narrow Way—working with director Adam Palafox—has taken a mighty step forward, unleashing Fishburne’s angry, urban exorcism with a blend of ferocious energy and electrifyingly messy invention. That invention is most visible in Palafox’s decision to double-cast the show, with two sets of actors taking turns each performance. As a result, every show is different, as various combinations of actors change the energy and chemistry from night to night, inviting multiple viewings from the audience. (I’ve now seen it twice.)In the role of Mike, a small-time criminal with a passive-aggressive sense of loyalty to friends and family, Dan Farley and Chris Ginesi put entirely different spins on the character. Farley’s Mike is a frightened, abandoned boy wrapped in a frail facade of calculated tough-guy bravado; Ginesi plays Mike as more openly vulnerable, all twitchy nerves and innocent self-delusion. Playing Torch, Mike’s recently discovered half-brother, Clint Campbell evokes an angry void, a human hole long ago filled up with empty rumblings of rage and resentment. In the same role, the heartbreaking and astonishingly believable Freddie Lambert is so good at reflecting Torch’s emotional and physical pain it actually hurts to watch him. As Tony, Nick Christenson and Dan Saski couldn’t be more different. Christenson’s Tony is an imposing presence who’s clearly not fully comfortable with himself and his choices except in the company of those who either fear or respect him. In another first-rate performance, Saski (recently seen in the Rep’s Three Musketeers) delivers Tony as a smart, shrewd “little guy,” who is always thinking and weighing the risks, even when delivering scathingly hilarious prison-yard poetry. Not all of this works smoothly. The range in experience among the actors shows, and the pacing skews wildly from scene to scene—and with the rotating casting, from night to night. The play itself is sometimes a bit of a problem. Though imbued with three truly captivating, layered characters, Fishburne’s freshman effort carries an unfortunate disingenuousness in its plot, with some of the characters asked to behave in ways early on that, once all of the mysteries are revealed at the climax, seem entirely false for those people as we’ve now come to see them. Still, as an exercise in balls-out acting, as a breath of fresh air in the sometimes too-safe arena of North Bay theater, Narrow Way’s Riff Raff is vivid, wild and never less than thrilling.