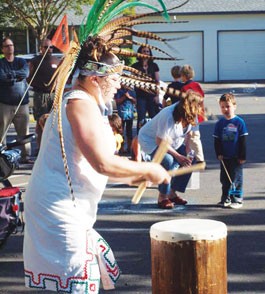 Julie Chasen is a hospitality hero, though she would not say so herself. Founder of Growing a Village – Cultivando un Pueblo, Chasen has helped neighbors transform the streets and houses around Santa Rosa Junior College into a warmer, friendlier and more hospitable place to live and pursue projects together—a place that bridges cultures.

For the past 17 years, Chasen has made it a point to engage her neighbors, in particular those from Latin America. Mexico, in fact, was where she learned most about kindness. “People in Mexico were so kind,” explains Chasen, who long ago ventured with only $180 and a Spanish dictionary to Michoacan, where at every juncture of her journey people helped her. “I knew that my country did not treat Mexico well in terms of political policies,” explained Chasen, an East Coast native. “I knew I was coming from a country that does not do nice things to people from Mexico. It was amazing to me. I was helped so much.”

Living 12 months in Mexico, Chasen became fluent in Spanish—and in Mexican kindness. “People in Mexico taught me how to live in community,” says Chasen. Returning the kindness she received in their country, she has succeeded in creating projects that are culturally inclusive in her own neighborhood.

“I began by interviewing all the young people for a year,” Chasen says. “I asked them what they wanted in their neighborhood.” From those interviews the collaborating neighbors created four categories for shared activities: community service, creative arts, skill-building and ecological action. “Our events evolve naturally from what the kids want.”

The city of Santa Rosa honored Chasen with a merit award in 2009 for bringing people together in the JC area. “There is a big disparity of income and diversity of age and culture in our neighborhood,” says Chasen, “and people living in houses don’t always tune in to people living in apartments.” But tuning-in happens more frequently now, as an elder living in a house receives community service help from an apartment-dweller, and as a child now gardens and plays on property that she may not have set foot on before the village model began to emerge.

Chasen wants to see villages emerging everywhere. “My hope is to create inspiration for other neighborhoods, so they might step through those barriers that keep people separate,” says Chasen. “It’s nice to have the language skills, but it’s not essential. People understand being invited to a meal or their kids being invited to a party.”

Hospitality, it seems, crosses all boundaries.

Previous ArticleLagunitas Sucks (but maybe in the 90’s Primus kind of way?)