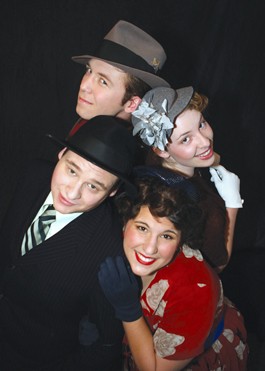 Why college theater and, sure, college football deserve your support

I long ago discovered something that many people are shocked to hear, and it is this: Nonprofessional theater is terribly exciting.

This is true in spite of the fact that it is occasionally terrible.

What is the primary difference between a college-level football game and a college-level theater production? Answer: the football game is more likely to have a large, committed audience in attendance, cheering on the local team, while the theatrical production is more likely to be playing to half-empty houses. The reason for this is simple, though infuriatingly wrong-headed. People enjoy amateur sports because, while the players are far less technically proficient and controlled than in professional football (or baseball or basketball), everyone knows its fun to watch spirited young players giving their all out there on the field.

In the case of theater, however, the mere suggestion of attending a nonprofessional theater production (and this includes both college-level theater, high-school level and most community theater), sends a lot of people’s eyeballs rolling. To such folks, “nonprofessional” is a synonym for “bad,” while if you made the same claim about nonprofessional sports, you just might have a fistfight on your hands.

Theater, as in sports, has everything to do with heart. Watching young actors tackling their first Shakespeare or warbling through their first lead in a musical can be as thrilling as watching a rookie receiver pull away from the pack and get ready to catch (or not) a long pass from the quarterback. What matters at this level is not technical proficiency. What matters is not how long they’ve been doing it or how ready-for-prime-time they are. What matters is the heart they bring to the field—or to the stage.

Which brings us, finally, to theater arts program of the Santa Rosa Junior College. Under the guidance of Leslie McCauley, the program boasts a staff of instructors and directors as committed to giving students opportunities to develop their skills as they are to bringing new plays to local audiences. Unfortunately, except for the better-known musicals, such as the always popular Guys and Dolls, which opens next weekend, SRJC has been struggling with finding an audience for its smaller, nonmusical shows.

Last season’s Anatomy of Gray was one of the best shows of the year, anywhere, and a number of past productions—The Life and Times of Judas Iscariot, Dead Man Walking, Rumors—have been good enough to end up on my Top 10 list at the end of the year, and yet, SRJC shows often perform to scads of empty seats. This is true despite the fact that the SRJC program is nationally known as one of the best training grounds for young and emerging actors in the Bay Area, with a strong emphasis on providing performers a wide array of plays—new and old, classical and hip—for learning their craft.

Consider the lineup just announced for SRJC’s 2009&–2010 schedule, beginning in October. The season will kick off with the North Bay premiere of Aaron Loeb’s Abraham Lincoln’s Big, Gay Dance Party, followed by The Wizard of Oz (November), two short stories by Barbara Kingsolver performed in the style of Word for Word (January), Shakespeare’s Comedy of Errors (March) and, finally, Grease (April). This assortment of shows features a pair of tried-and-true musical hits, something to sit some classical teeth into, and some modern stuff for the cast, and audience, to stretch expectations with.

‘Til then, there’s Guys and Dolls.

Get out those calendars, and mark down these shows. Check the website. Make the call, and reserve some tickets. It’s your chance to root for the home team—and maybe even witness a theatrical touchdown or two.