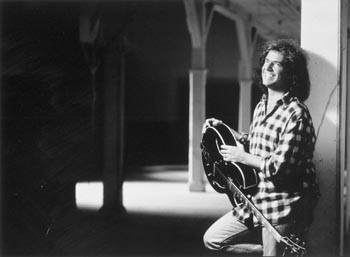 ASK PAT METHENY about detractors who have complained over the past 20-odd years that he has bent all the musical rules and the acclaimed jazz guitarist and composer just laughs. “In my case, music is something that goes way beyond job description,” he says. “It’s something that is inside my bones. It’s something that I’ve devoted virtually every waking minute to since I was 11 years old or so.

“The way all of that gets dissected or discussed [by others] is irrelevant to the reality of the music itself.”

These days, the Grammy-winning Metheny–smart, articulate, and eminently likable–is still breaking musical barriers with his trademark blend of experimental technology and melodic improvisation. During a rare 12-month “break” in New York, Metheny reunited last year with his own group, featuring longtime keyboardist Lyle Mays, to record Imaginary Day (Warner), an adventurous, texturally rich set that highlights his own remarkable fretwork on a 42-string guitar, among other instruments. The bold album veers wildly from a bluesy version of Indonesian gamelan music to an edgy techno blast reminiscent of Nine Inch Nails. Last year, he participated in British free-jazz guitarist Derek Baily’s exploratory quartet that resulted in a three-CD live document, The Sign of 4 (Knitting Factory). His 1997 collaboration with bassist Charlie Haden, Beyond the Missouri Sky (Verve), topped the jazz charts last year and is still selling well.

More recently, he contributed to bassist Marc Johnson’s newly released The Sound of Summer Running (Verve), which teams Metheny for the first time with avant-jazz guitarist Bill Frisell. “It was a dream,” he says of the project. “It was like neither one of us could do anything wrong.”

THAT PRETTY MUCH sums up Metheny’s career of late. One of the few young players to emerge with his integrity intact from the experimental ’70s fusion era–a movement that quickly dissipated into a mix of overindulgent wank and pop-lite fluff–Metheny doesn’t mince words when the topic shifts to the media’s love affair with such rebop artists as Wynton Marsalis. “It’s having a really minor effect on the music and virtually no effect on the culture at large,” he says. “Frankly, if I want to hear music that’s in that zone, I’m going to listen to Duke Ellington or Miles Davis or John Coltrane. Unfortunately, I haven’t heard anybody who’s advanced that way of playing or even come close to the level of playing expressed by the original guys.

“The famous Miles quote is, ‘Didn’t we do it right the first time?’ The answer is, ‘Yes, they did.'”

While he apologizes for any disrespect he may show his peers, Metheny feels strongly that improvisational musicians have a duty to chronicle the times in which they live.

“When you listen to a Louis Armstrong record from the ’20s, you not only get this great music, you get this whole vibe, almost a look at how people talked to each other and the clothes that they wore. With Miles Davis in the ’60s, you also got a sense of the instrument technology and the way people heard things. The things that made that particular moment in culture distinctive are very often embodied in the casual, almost offhand narrative playing that jazz players are in the business of doing,” he explains.

“When you’re in the middle of the times, like we are right now, we’re so inside it that it doesn’t seem to us like there’s anything special going on. But there are things about our time that are going on right now that we can’t even see. Because of the improvisational nature of jazz, the sort of documentary quality that a lot of jazz recordings have, there is this extra thing that will be real valuable for people in the future when they go looking for a sense of what was happening in our time.”

AND WHERE does Metheny’s work fit into the overall jazz picture? “My particular relationship with the music has nothing to do with the idiom–I don’t care if it’s called bebop or fusion, and that’s a term that emerged eight or 10 years after I’d already started doing what I was doing. I was just playing what I wanted to play,” he insists.

“As for the word jazz or any of these other words that get thrown around to describe certain idioms, ultimately and with all respect to everybody, I could give a shit. It has no real meaning to me.

“In the same way as whatever was said about Bach or Mozart or Frankie Valli and the Four Seasons, all of that criticism is irrelevant in the face of what they actually did. The music speaks in the language of music perfectly fine. In my case, the thing that will matter is what it all sounds like in the end. How it fits into the jigsaw puzzle of modern contemporary culture is something that it’s fun to sit around and talk about over dinner for a half an hour.

“But ultimately, it’s just that–just a bunch of guys talkin’.”