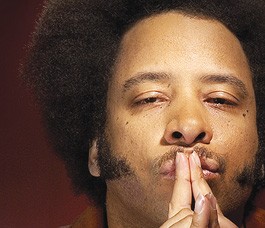 Two things happen when you slap a Coup album on the turntable. First, you will dance. Your hips will start moving, your feet will start tapping a bass beat and your arms will rise up, moving in time to the sick rhythm rising from the speakers. Second, as you shake your booty, living up to a quote famously (and erroneously) attributed to radical anarchist and feminist labor agitator Emma Goldman, “It’s not my revolution if I can’t dance to it,” you’ll also begin to feel an itch to start a street protest or perhaps take down a corrupt CEO. Imagine a meeting of Marxists spewing dialogue mixed with Dirty Mind&–era Prince.

Formed in the early ’90s by emcee Boots Riley (above), rapper E-Roc and Pam the Funkstress—the first female DJ star in a male-dominated turntablist scene—the group first released a self-distributed EP in 1991. Over the course of the next 16 years, the duo of Riley and Pam the Funkstress have released a series of critically acclaimed records, all chock-full of incendiary lyrics and thick, juicy bass-driven funk that take residence in the body and brain and don’t let up until the album ends.

The Coup’s 2001 masterpiece, Party Music, reached a level of notoriety previously unseen. In an uncanny example of prescience, the original cover for the album—scheduled to be released shortly after Sept. 11, 2001—contained an image of the group blowing up the World Trade Center towers with a guitar tuner and drumstick. Created a full three months before 9-11, the album art was pulled until a new cover could be created, and it became the target of swift conservative wrath.