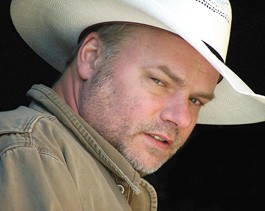 After 30 years of ramshackle, redneck storytelling about cars, guns and booze, Fred Eaglesmith has found his soft side.

Cha Cha Cha, the prolific, under-the-radar songwriter’s 18th album, is a swampy, noirish landscape of minor keys, rattling percussion, female backup voices and a far more subdued transformation of Eaglesmith’s signature rasp. His lyrics are lonesome, pleading for departed lovers to return and quell his inner torment. Even to diehard Fredheads, as his legions of fans call themselves, the record is a complete curveball, departing drastically from the rollicking, good-natured Eaglesmith of old.

“Yeah, I’m constantly departing,” Eaglesmith jokes wryly, on the phone from the road in Nova Scotia. “I think almost every record I’ve made, they’ve called it a departure.”

In this, the always changing Eaglesmith joins esteemed company. Much like Tom Waits or Leonard Cohen’s 1980s output, Cha Cha Cha is anchored by a glitzy yet grimy backing. But mostly, it sounds a lot like Bob Dylan’s maligned Christian records.

When I mention this to Eaglesmith, he lights up. “Some of my favorite Bob Dylan records were the ones that they just beat him up for,” he enthuses. “One of my very favorites is Street Legal, just an amazing record, and it was overlooked to the point of insulting. It wasn’t even panned, it was just overlooked. I sorta now make records with that in mind.”

Eaglesmith’s lyrics, which once featured long narrative yarns spun from a well-developed character’s point of view, settle on Cha Cha Cha into basic statements of desire. “You know, you have to write a lot of complicated songs before you can write a simple one,” he says, citing an obsession with Chet Baker. “There are so many complicated singers out there right now, so many twists of words and so much going on, it’s exhausting to listen to all the songwriters now. You know what I mean?”

Eaglesmith, now 53, was born into a farming family in Ontario, Canada. He’s been writing songs and performing ever since he hopped a train out of town as a teenager. For years, he ran his own record label with a general delivery address, and despite amassing a devout following, he inexplicably never managed to crack the mainstream with his tough-skinned songs about rural life and love gone wrong.

For a primer on early Fred Eaglesmith, there’s truly no finer document than the 2001 double-CD set Ralph’s Last Show, recorded live in Santa Cruz. Playing with his longtime bassist Ralph Schipper for the final time, Eaglesmith is impassioned (“Lucille”), funny (“White Trash”), defensive (“Pretty Good Guy”), regretful (“John Deere”) and oftentimes all of these things at once, as in the not exactly tongue-in-cheek “Time to Get a Gun.”

Eaglesmith’s large back catalogue has been extensively covered—70 or 80 times, he estimates. Last year, country star Miranda Lambert recorded “Time to Get a Gun” for her album Revolution, named the Academy of Country Music’s album of the year; this year, Alan Jackson recorded his “Freight Train,” joining Toby Keith’s cover of “Thinkin’ ‘Bout You” in a trinity of big-name stars. “Alan, Toby and Miranda, they all brought the songs in themselves,” Eaglesmith says. “No one pitched it. That’s a real compliment to me.”

Such high-profile covers have helped financially and put some gold records on his wall, and this year he was invited to play Late Night with David Letterman, although Eaglesmith is by no means living high on the hog. Most of the year, he’s on the road, slogging it out in small but appreciative clubs, and he seems to like it that way. “All my friends sign with these major labels,” he says, “and they call me a few years later, saying, ‘Um, how do I do the other thing?’

“You know, it’s getting really, really tough,” he adds. “There’s a pile of bands out there and none of them have any work and it’s hard, and you know what? I’m all right. I know professional musicians who can’t pay the bills. I’m still filling the halls, even though they’re little halls, and I’m still selling CDs at the show, and I’m payin’ the bills and makin’ a livin’ and travelin’, and my life has pretty good integrity. That’s all I can ask.”