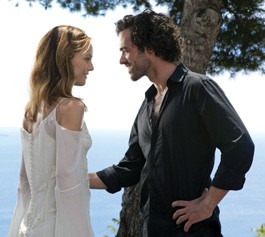 Take the claim that critics always prefer foreign films to the sturdy American product. Why, if you wanted a better example of glossy, inane dreck than Heartbreaker, you would have to go to France for it.

Dumbed down for the export audience, this superlatively moldy farce is nearly free of any redeeming qualities. Romain Duris plays Alex (above), the head of a three-person team of consultants brought in to break up undesirable romances. Using different identities and the help of his sister (Ferrier) and brother-in-law (François Damiens), Alex seduces women away from relationships that would make them unhappy.

His latest job is his toughest: breaking the engagement of an immaculately good catch, a wealthy British philanthropist and a French heiress, Juliette (Vanessa Paradis, above, a kind of ultrastarved version of Lauren Hutton). In Monaco, Alex poses as a bodyguard to follow his target, but Juliette proves resistant. Slapstick intervals (including regularly scheduled pummelings from some Slavic gangsters collecting money) ensue.

Juliette is characterized as this perfect chic woman whose only concession to vulnerability is a craze for the movie Dirty Dancing; her arrogance is supposed to be charm. This would make it easy for anyone, no matter how basically one-note, to steal the show, but the show steals back, so to speak. It never gets beyond its long soak in expensive locations, and the script wheezes as it tries to reach the insurmountable height of its high-concept plot. The Moroccan opening sequence might make up a date movie, but the audience would have to be under some kind of heavy sedation to tune out everything else.