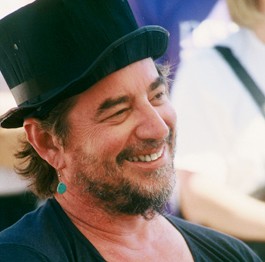 Nighttime is beautiful to Greg Brown. Keeping warm by the fire with your true love in your arms, whispering to each other about eternity. Smelling the nape of each other’s necks at night. Making love in the tall grass as the raindrops fall on the flowers. Kissing under the full moon.

Then the day rolls around and everything goes to hell. Boys drown in a lake, old people rue their wasted lives, shiftless husbands die from careless gunshots and nagging wives succumb to heart attacks. The mill closes down, the fields burn. Trains crash. Strip malls take over.

It’s not correct to call Greg Brown’s music bipolar, unless you’re willing to call life itself bipolar. More than any other folk musician, Brown is able to take snapshots of life and put them into song with his low, graveled baritone, from ends both euphoric and miserable. The depressing experience of loading into another grungy club is succinctly laid out in “Mose Allison Played Here”; the utter joy at falling in love is encapsulated perfectly in “Hey Baby Hey.”

In Sonoma County, Greg Brown’s less gritty self is the more popular, but after 24 albums released on his own Red House label, popularity is hardly a driving force for the 59-year-old native Iowan. The last time Brown was here, in 2003, he sat down with lanky ace Stratocaster accompanist Bo Ramsey and played an entire set of stark, hopeless blues songs. The war had just been announced. People shouted requests from Brown’s more uplifting albums, like Further In and The Poet Game. They were ignored.

Though now married to fellow folksinger Iris DeMent and the new father of an adopted child, Brown isn’t exactly one for bright new leases on life. Since albums like Slant 6 Mind and Over & Under, Brown’s continued as a purveyor of truth through poetry, intellect and humor, and the truth isn’t always pretty. His latest album, 2006’s The Evening Call, continues the constant push-pull of optimism and darkness; in “Eugene,” he sings that “World peace is surely on the horizon / Once us old fuckers die.”

It’s a dismal thought, world peace being achieved only after one’s death, but the fact is that the war is still going on, and sometimes it actually does seem like world peace isn’t in our lifetime. And what can you do in the meantime? Of course. Keep warm by the fire with your true love, whisper about eternity, make love in the tall grass, kiss beneath the full moon and go see the brilliant Greg Brown on Saturday, Oct. 4, at the Mystic Theatre, 23 Petaluma Blvd. N., Petaluma. 8pm. $25&–$28. 707.765.2121.