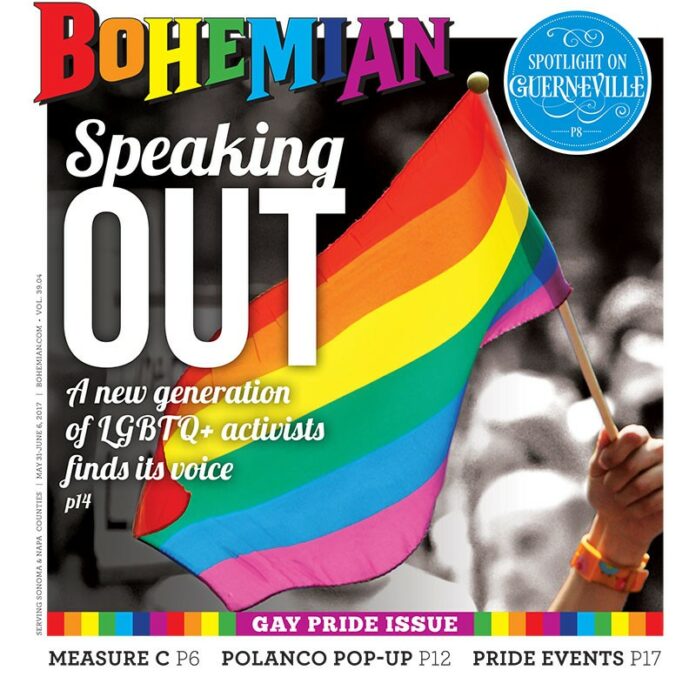 Out, But Not Down

Gay youth face down a climate of fear

As an increasingly disgraced White House bullies its way from one feckless and embarrassing outrage to the next, LGBTQ+ activists and advocates in the North Bay and across the country are grappling with the same despair that hangs in the air for many Americans.

For the LGBTQ+ communities of the North Bay, advocates already face fallout from Trump’s ramped-up deportation efforts, of special concern in a rural region that lacks the queer-dedicated resources of San Francisco, and where LGBTQ+ noncitizens face a cruel double- or triple-vulnerability—to be young, undocumented and gay.

“I’m not living that experience, but there is already a huge sense of fear, of being LGBT-identified, and then this huge undercurrent of being deported. It creates a whole different dynamic for an individual and a culture,” says Javier Rivera-Rosales, director of Positive Images in Santa Rosa, an advocacy and outreach group that works with LGBTQ+ youth from around Sonoma County. “It jeopardizes stability and rootedness that this is the only thing they know; this is their home.”

Rivera-Rosales highlights the difficulty in out-front advocacy and outreach in the current climate of fear, where some undocumented LGBTQ+’s retreat to isolation or loneliness. Others become empowered and speak out. “People who don’t disclose their status are still speaking out and being that advocate,” Rivera-Rosales says. Even still, he continues, “one of the biggest things I see is that fear component.”

Youth facing deportation are also ensnared in cultural and familial issues. “What is your relation to your family and your friends to your queerness, your gender identity, your sexual orientation?” he asks. “I know folks personally that don’t feel safe in either category.” And even when a Latino LGBTQ+ teen goes to the group where people share their identity, he says those queer spaces “are not always comfortable because there’s not a lot of people of color or people from other backgrounds in Sonoma County.”

That sense of fear is something that Eric Sawyer can speak to as one of the founders of the AIDS Coalition to Unleash Power (ACT-UP) in the 1980s. The lifelong HIV/AIDS and human-rights worker is pessimistic about the state of the union as he tees off in a phone interview from New York about a country that has “actually elected someone who has no qualifications whatsoever to be the [president] of the United States and is bringing with him a cadre of imbeciles and incompetent pilferers. Self-absorbed me-me-me vacuum cleaners trying to dry the world of every natural resource, anything of value to enrich themselves.”

ACT-UP’s media-savvy activism spurred public attention and worldwide action that helped save Sawyer’s life and those of countless others during the height of the AIDS epidemic. He rattles off proposed environmental cuts and giveaways under consideration by the White House, including “the National Park Service, the EPA, the right to drill in the ocean anywhere, in any national park,” as he engages with the present level of frustration he feels and the proper response to it.

Sawyer says the feeling of despair in the air is very much like the early days of ACT-UP as an indifferent and/or homophobic media and political class wrote off the deaths as isolated incidents, while “a plague [was] decimating the gay community and IV drug users and other vulnerable groups.”

The difference between now and then was that during the Reagan era, for all its flaws and faults, the vulnerable and already-trampled weren’t also dealing with “the widespread degradation of American society, the rule of law and our government,” Sawyer adds. “It’s clear that some of these pariahs that are in the White House for whatever reason, really want to collapse society, and I can only suppose it’s so they can rape and pillage it. I don’t understand why there is not revolution in the streets. It’s fucking unbelievable.”

An earlier generation of gay men faced down a flatly homophobic culture as they took the first steps out of the closet. Emmy Award-winning filmmaker John Scagliotti came out of a 1960s anti-war generation that broke numerous social and cultural barriers to pave the way for a nation where, a half century after the 1969 Stonewall riots, gay marriage is now a constitutionally protected right. At least for now. Scagliotti was an activist during a period when life and death for many young people was answered through the question of whether they’d be sent to Vietnam or not. His Before Stonewall is one of several films he made that details LGBTQ+ history in the United States.

Scagliotti says that despite the urgent depravity of the current spectacle underway in Washington, he’s not convinced America is cracking up under the strain of its multiple ailments as he considers whether ACT-UP–style activism—confrontational, media-savvy and unrelenting—is a product of the times.

“I don’t feel we are there yet,” he says. “ACT-UP came out of a real sense of horror. Everyone was dying. And I don’t feel, as much as [the current president] is kind of bad, vulgar and ridiculous and silly, and rounding up Mexicans, but so did Obama—I don’t think people feel it yet. Maybe on climate change, young people might feel that. That’s the closest thing. That’s what ACT-UP is from, so there is a possibility there, the shared sense of existential despair,” he says.

Scagliotti was surprised at the lack of coordinated protests to the deportation regime now underway. “I would have thought that once that they started rounding up Mexicans, it would end,” he says. “That would be that. They would have to stop the next day, because so many people would be out there doing so many things—but nobody stopped the mass deportations.”

Can anyone? And is ACT-UP’s media-savvy, confrontational approach the way to go?

“The most fascinating thing about ACT-UP was its sophistication with the media,” Scagliotti says. “Actions were very thought-out and all based on six, 10, 20 people and a sort of a cell, and no one could tell anyone else what to do. I think this is a much better approach than these boring mass-demonstration protests. Both are important but it would be fascinating to see that kind of activity. You really have to feel it—that existential despair—down to your bones, to understand how ACT-UP worked.”

Ian Stanley is the 38-year-old program director of LGBTQ Connection in Napa, a multi-services outreach group focused on youth advocacy and activism. He cites the paucity of services for Spanish-speaking LGBTQ+ residents as one of several gaps his organization tries to fill in a rural region with many noncitizens and other LGBTQ+ youth. The organization was founded to support young trans-persons, he said, “and especially the youth who are least likely to be connected or to find support.”

Stanley’s organization is expanding into Sonoma Valley and Calistoga in the coming months. “California has a buffer of protection,” he says, “but the rhetoric is creating fear” for young trans people and immigrant communities alike.

“As our program has grown, we have definitely had to pay attention to our role in the community and the approaches we take,” Stanley says. On the question of ACT-UP–style activism, he says he grew up “white and privileged in the North Bay, had a hard time understanding the tactics that were used by other movements because I didn’t know what they did for the community.”

But after studying the history of the LGBTQ+ community and the role ACT-UP played, he now sees “undocumented LGBTs who are really at the forefront and pushing action and change—pushing fair and just immigration reform. They are much more at the forefront. It pushes you to the life-or-death model.”

Eliseo Rivas is a millennial outreach worker at LGBTQ Connection in Napa. He says young activists can’t keep up with the need in a region where “between Sonoma, Solano and Napa, sometimes people will travel to San Francisco to get the services they need.”

Their services and the welcoming environment are needed now more than ever, says Rivas, to confront “the existential dread that may face a young person now, a teenager who is seeing more and more of their rights taken away from them.”

Bad to the Loan