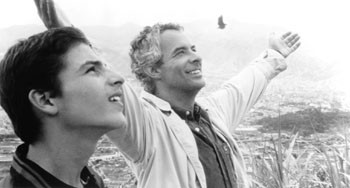 ‘Our Lady of the Assassins’

IMAGINE a city where you could strike anyone who displeased you stone dead. As portrayed in Barbet Schroeder’s harrowing Our Lady of the Assassins, Medellin, Colombia, is just that: a city ruled by the pistol.

A gay, middle-aged, burned-out writer named Fernando (German Jaramillo) has come back to his Colombian hometown to enjoy his decline. In the first scene, a group of men throw him a party in a handsomely decorated flat. They’ve brought Fernando a welcome-home present; his name is Alexis (Anderson Balusteros), and the older man is invited by his host to show the lad “to the butterfly room.” When they get there, the hustler says, “Where’s the butterflies?” Reaching for him, Fernando says, “We’re the butterflies.”

This tryst with Alexis turns into true love. Like an older Virgil and young Dante, they tour what Medellin has become.

Strife between the coke barons has turned this thriving mountain city into a murder capital. And Alexis, though a sweet, affectionate, and unflappable kid, is an assassin for one of the many local gangs and currently under sentence of death from a rival group. He can’t imagine another world, so he’s basically cheerful. Fernando can, and that deepens his melancholy. Though he’s an atheist, Fernando is drawn to churches, the only places in Medellin where traffic, music, and gunfire won’t deafen a man seeking peace.

In making a film about hopelessness, the director deals with nihilism nihilistically, which makes the film almost unwatchable. Schroeder, shooting on high-res digital video, celebrates what beauty there is in the people and surroundings.

Much of the setting here is a luxury apartment, above the town. Fernando has some inherited money he proposes to burn through; so for besieged people, Alexis and Fernando are quite comfortable. In Medellin, apparently smugglers like to fire off rockets to celebrate the successful arrival of a new shipment–the two take in the fireworks as a celebration of their love.

Our Lady of the Assassins has the problem of a very talkative hero whose naïveté is astounding. Moreover, Schroeder doesn’t seem to critique the man’s occasional dithering silliness. Blame Jaramillo’s minorness as an actor; he can never make his own middle-aged, middle-class angst match the terrors of the street. For an educated man, Fernando seems blind to the law of cause and effect. He’s deceived himself, never understanding that killing is a reflex for Alexis (if the kid is angelic, he’s a destroying angel.)

Still, this film with a somber subject is laced with romance and fatalistic humor. Schroeder, who survived the company of Idi Amin (he directed a documentary about the lethal dictator of Uganda), is not one to overstate a danger or to trip out on squalor. Nor is he one to romanticize–as so many yellow-bellied directors will–the cult of the gun. His images of churches haunted by starving addicts and of streets where children not old enough to vote have the power of life and death will haunt you.

Watching Our Lady of the Assassins you’re certain of one thing: this is a view of the city of the future.