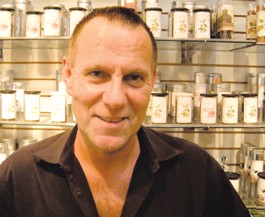 In downtown Mill Valley, the locals are serious about their bodies and what they put in them, from the joggers beneath the shadow of the great Mt. Tam to the throngs of Whole Foods devotees. No wonder that further down Miller Avenue, in between a bike shop and a boutique, sits Tea Fountain, the longstanding Marin store offering literally hundreds of affordable loose gourmet and artisan teas from around the world, and dozens of accessories for any purchase. One might think the Tea Fountain’s posh, new high-end location would better suit its connoisseur clientele than its longtime Northgate Mall spot, but owner Rover Benecke couldn’t disagree more. “Nothing against coffee drinkers, but tea people in general are sophisticated to begin with,” he says with a smile. “And when we moved here, we brought all of our regular customers with us, some from as far away as Palo Alto.”

Much more than just a favorable alternative to coffee, tea has been on the rise on the West Coast over the past decade. “Up and down the coast, there’s now as much tea consumed as on the East Coast and Canada,” says Benecke. “Also, with the information now available through the internet, people’s eyes are suddenly opened to a beverage that’s been around for 200 years.”

While still a youthful and sprightly middle-aged man, Benecke has already spent about 40 years in the tea business. Born and raised in Hamburg, Germany—the largest tea harbor in the world since the spice trade routes—Benecke began his life’s work as a young consumer with precocious taste buds.

“I was about 19 years old and I discovered Darjeeling teas, which are the Champagne of teas,” he remembers. “When I couldn’t find new ones, since I was living in the right city I contacted wholesalers and got into buying tea wholesale in small amounts, only one or two different teas at a time.” Benecke’s presence among sellers was so constant that a business proposition was inevitable. “When I was 24, one of the wholesalers said, ‘OK, young man, if I give you a hundred teas of your choice, now that you know teas, and you start paying me back for this stock half a year from now, would you open a tea business?'” he recalls. “That was January 1975, and in April I had my own tea business, my first retail store.”After a decade and a half as an international tea broker, Benecke fell in love with Marin during a trip to the Zen Center’s Green Gulch Farm. Before too long, the new transplant found more than just a spiritual niche to be filled. “There weren’t really places where you could buy quality teas,” says Benecke, who currently lives in Sausalito. “Usually it was combined with coffee and spices, and then all of a sudden, specialty stores started. I thought it was a nice time to start the retail business again.” With the new millennium came Tea Fountain, but the new venture could never be effective as a fly-by-night operation. “There are all kinds of tea businesses opening, and some of them are already closing, because it is a serious business,” Benecke says. “The tea business, just like the wine connoisseur business, is very particular. You don’t just open it up and put a hundred different wines in the shop—you’ve got to really know about it. “Further complicating the industry is the fact that tea metamorphoses even more rapidly than wine. “Teas are like little children in kindergarten: you think you’ve got them under control, then there’s a new season and you have new crops, and the blends you have designed all of a sudden don’t fit anymore,” Benecke chuckles. “They don’t taste the same, the character changes based on climate, elevation.”This is where Benecke’s expert palate comes into play. “You get samples of different estates to find the ones that you really like, because you know it’s going to be different than it was last year,” he says. “With some teas, it’s even different than it was the last season, just three or four months ago.” The fleeting nature of all delectable tea behooves customers to act promptly. “For example, we have a very good crop of the 2009 Castleton Estate, DJ 2, and there’s only about 220 pounds available on the world market,” he says. “Two days ago we received 20 percent of what’s on the world market. So people buy larger amounts—one pound, two, three, four. Just as with a certain harvest of wine, you don’t just get one case, you get four cases and put it in your wine cellar.”The current roster includes the popular Summer in the City, #49, a popular base for hot or iced tea. “What makes it a great iced tea is that the tea base doesn’t turn cloudy when you hit it with ice,” Benecke says. “There’s also a new herbal tea that people started to like called the Sherwood Forest.”The work certainly doesn’t stop when the tea is shipped from Asia. “Since we import it ourselves, every six to eight weeks a ton of tea has to be distributed, packaged into different sizes, because we do wholesale to other tea vendors, hotels and restaurants, and even make special blends for spas,” he says. “The week is all about tea and then quality control—and we have more than 300 different teas.” Despite his lack of formal horticulture training, there are few in the world as educated on the subject as Benecke. His four decades of hands-on experience began in the European laboratories for testing, grading and pricing. It’s no wonder he’s also a much sought-after trainer and consultant for restaurants and manufacturers around the world. “A company comes up with a porcelain teapot with a fancy design, and I say it will never work because the spout is too high and the moment you tilt it, it will come out of the lid before it comes out of the spout,” he says. “I have the feeling that most of the tea accessories are designed by coffee drinkers.”

Though a thorough businessman, Benecke often offers his singular services pro bono. “It would be another job, industrial consulting, but I don’t get paid for this,” he says. “My payoff is once the product is ready, then I have a tea accessory that I can purchase and offer on the market, along with some teas.”

Benecke’s generosity extends directly to retail customers as well, and has gained him a reputation as a welcoming, inclusive educator. Aside from the hefty free samples of specialty teas, a discussion of proper storage is itself a fascinating discovery.

“The perfect temperature to store tea is about 68 to 70 degrees, and if you store them right, you age them as well as you do certain wines,” he says. “Our basic advice is that every tea should be stored below stove-top level, where the temperature doesn’t go up and down as often or as drastically. People put spices on top of the stove, and three months later every spice is dead.” Refinement without exclusivity seems to have aided Benecke’s longtime success. “The more education you can give in an easy way without trying to sell anything to the customer, the more they obviously trust you and the more they’re interested to find out more,” he asserts. “And once they get to this kind of grade of good tea, there’s no way back.”Despite a few wisecracks here and there, Benecke is not opposed to drinking coffee. “I have three to four cups a year because I like the smell, especially espresso,” he says. “Actually, we have a few customers who are coffee connoisseurs, and they roast their own coffee and say after two days you cannot use it anymore.”The conversation, of course, returns to his true love, this time about the false myths about high caffeine concerns.

“The caffeine in coffee triggers your cardio system, but tea has theine, which triggers your central nervous system and makes your brain fire on a more efficient level,” Benecke says excitedly. “If you have kids, and a medical condition doesn’t prohibit this, give them a cup of tea in the morning and fire up their brain.” He chuckles but maintains strong eye contact. “Honestly,” he says.Like he said earlier, the tea business is a serious business.