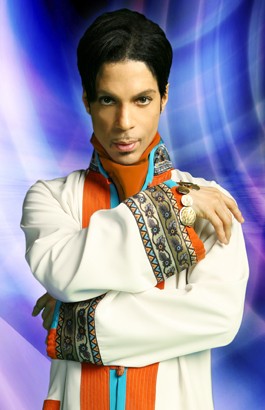 Cracking Prince jokes is like shooting fish in a barrel—even his most ardent admirers have to admit that the artist takes pains to maintain what is already an enigmatic aura. But Prince is in your corner, folks. Early last month, His Purpleness took steps to make it that much easier to make a funny at his expense when his legal team presented unofficial Prince websites with cease-and-desist letters demanding that they remove all photos, album covers, lyrics and Prince-related images.

It’s hard to run a Prince fan site without access to anything Prince-related. And because we Americans are mightily fond of our First Amendment rights, three of the sites—Housequake.com, Prince.org and PrinceFams.com—have come together to form PrinceFansUnited.com. They hope to talk sense into Paisley Park or, if necessary, to “defend their position in the proper court of law, as well as fully prosecute any claims to which they are justly entitled.”

This puts PrinceFansUnited.com in the curious position of attacking Prince in order to continue supporting him. If the devotion of Prince’s fans means so little to him, why adore Prince in the first place? It’s potentially crushing, a cruel slap of reality in a world constructed purely for escape. Will this bitter aftertaste irrevocably destroy fans’ ability to get hot and funky with the music of their faraway Purple Highness? And why would Prince do such a thing in the first place?

Such a move may seem ridiculous, but—for better and for worse—”Prince” and “ridiculous” go hand-in-hand. He established his eccentricity decades ago: the aborted symbol name-change, the abrupt conversion to Jehovah’s Witnesses, the ill-conceived and iller-executed vanity movie projects. (Purple Rain may have an immortal soundtrack, but the film itself is only watchable if you are drunk and on the precipice of passing out.) From the perspective our seats afford, the dude’s crazy, and quite possibly totally sincere about it.

Let’s try to think of this from Prince’s angle. First of all, there’s a chance that his grasp on reality is tenuous, a risk all those who dwell in glass bubbles run. It’s hard to keep it real when you are constantly surrounded by (or surround yourself with) a gaggle of sycophantic hangers-on, or when your name rarely appears in print unaccompanied by the word “genius.” Prince Fans United claims that the cease-and-desist orders may have been an attempt to stifle critical commentary. If that was a motivation, it backfired. Badly. What’s more fun to write and read about than a pint-sized megalomaniac’s unwarranted attacks on his devoted fans?

Comments on RollingStone.com have both defended and attacked Prince. “Instead of creating an innovative Internet model for his music, he is taking his frustration over his failed business model out on the very people who put him in business in the first place. . . . Prince gets no more $$$ from me and that will be what hurts him the most in all this,” wrote one disgruntled Prince follower.

But not everyone feels this way: “Prince doesn’t want us worshiping him like an idol, he wants us to respect him as a man and artist and let him do his thing,” another Prince fan countered. “There’s more to the world than just Prince and this is his point!”

If that is indeed Prince’s point, he made it in a very bratty way. An artist does have a right to control how and where his output is represented—but at the same time, once art is out there, it’s out. People grab on to it, and their passions can take a number of paths, from misinterpreting a song’s intended meaning to sharing a bootlegged concert recording.

It’s hard to empathize with the very rich and naturally cocky, which Metallica showed us in 2000 when they sued Napster after an unauthorized demo of their song “I Disappear” showed up on the file-sharing site. “We take our craft—whether it be the music, the lyrics, or the photos and artwork—very seriously, as do most artists,” Metallica drummer Lars Ulrich stated in a press release at the time. “It is therefore sickening to know that our art is being traded like a commodity rather than the art that it is.”

So even if Metallica vs. Napster did have less to do with money than asking fans to respect the band’s boundaries for control of their craft, fans didn’t sense artistic integrity rolling off Metallica in waves. In the media circus that sprang up around the trial, the band came across as a bunch of reactionary billionaire crybabies with no capacity to adapt to major shifts in the way consumers gather and listen to recorded music. Is it better to shut up and take it, or speak out and risk isolating a gigantic chunk of your fan base, the very people whose hard-earned cash bankrolls your Basquiat paintings and designer spike-heeled boots?

It must be utterly exhausting to mean so much to so many people, but there are those who manage to be gracious to their fan base. Radiohead recently released their pay-what-you-wish Internet-only album, squeezing more publicity from that action alone than anything surrounding their previous album, Hail to the Thief. What makes Prince exactly so hard to pin down are such dichotomies as his string of 21 London shows last summer with tickets uniformly priced at a mere £31.21 and his renegade giveaway of his lastest disc, Planet Earth, in the Sunday edition of London’s Mail newspaper before it was formally released to fans.

Without fans, Prince is nothing. This is indisputable; it means the fans have the upper hand, but only to the degree that their appreciation gives Prince’s oeuvre meaning outside of his own kingdom. A Nov. 17 statement on PrinceFansUnited.com speaks of negotiations with the Prince’s lawyers, reading, “Everyone involved now wishes to move on towards a more harmonious future, where the protection of artists’ rights and the freedoms of fan forums can happily co-exist.”

But despite any possible outcome, the situation has no true resolution; Prince will never have full control of his image, and fans will never have unfettered access to Prince the Artist. The tension of this balancing act is called celebrity, and it is the motor of our entertainment industry—perhaps more than it should be.