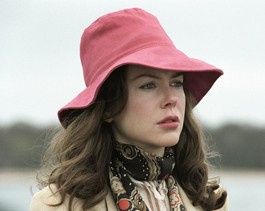 F unny. Critics endorse the tough, realistic qualities of the physical violence in No Country for Old Men, but they turn pale-faced at the emotional violence of Margot at the Wedding . “Why should we spend time in the company of such horrible people?” asked writers who had happily watched Chigurh the killer knock in all those skulls.

The titular antiheroine of Margot at the Wedding is the kind of drastically bad mother we have all encountered somewhere along the line. During an overcast spring weekend somewhere near Long Island, Margot (Nicole Kidman) and her sister, Pauline (Jennifer Jason Leigh), wash, fold and iron several years’ worth of dirty laundry.

It’s wedding bells for Pauline, who is getting hitched in her backyard, partially for money reasons. The groom, Malcolm (Jack Black), has neither a job nor ambition. A former minor-league rock musician, Malcolm is now more interested in writing beautifully crafted letters to the editors of magazines. The early spring weather isn’t too good. Neither is the neighborhood. The neighbors are truculent, trash-throwing rednecks with violent tempers.

Margot and her young son, Claude (Zane Pais), arrive from Manhattan for the weekend. Margot is a published short-story writer. Her slightly exalted status in the world masks a violent inability to cope.

Over the course of the weekend, Margot’s soon-to-be ex-husband (John Turturro) drops in for a visit, and she gives a public reading at a bookstore and has a fine public meltdown. And eventually, Margot renders her judgment on Malcolm: he’s completely unsuited for her sister.

Coincidentally, the plot resembles that of Knocked Up, complete with vindictive sister-in-law, pregnant bride and slacker husband-to-be. But where Knocked Up went for easy, TV-level laughs, Margot‘s director and writer Noah Baumbach worms his way into the motives of all the wedding guests.

Baumbach’s method is a Nouvelle Vague—style of carving scenes down to a series of abrupt sharp moments. This constant whittling causes confusion. The too-dim, natural-light photography leaves some of the faces shadowed, and the minor characters never really pop out.

Dark as the screen is, Baumbach does a good job of illuminating the kind of self-pity that leads to impotence. And he’s made a prime comedy about violently clueless sophisticates. Why should we pay attention to them? Well, they’re funny, for one thing, even if their behavior is so bad.

David Denby in The New Yorker magazine castigates Baumbach for not letting us know whether Margot has merit as a writer or not. (Of course she has merit, David, she’s been published in The New Yorker.) In Margot’s view, her status excuses her trespasses, and she has as much respect for boundaries as a coyote. I admire Baumbach for taking it off the table; it’s immaterial whether Margot is a genius or just another modish, small-fry literati.

There is a clue, though; if Margot really knew herself, she wouldn’t be so easily unmasked. All it takes to melt her down is a little simple literary analysis by a fellow writer. (The more openly arrogant novelist is played by Ciaran Hinds.) As in The Squid and the Whale, Baumbach excels at depicting the hostilities of the literary world, the rivalries, snobberies and scrabbling for small handholds of status.

Baumbach takes two actresses who pride themselves on ominousness, rigor and tension, and he gives them loose, fresh roles. Kidman and Leigh enjoy themselves for a change. It’s been a while since we’ve seen Leigh’s witchy grin, widening as her Pauline figures out a good way to pay her sister back for her snobbery.

It’s been longer since we’ve seen Kidman tempering her uncanniness with a dry tomboy humor. I think this is Kidman’s most thoroughly watchable performance, even if the role of Margot won’t be a popular part. Audiences rarely forgive a mother who gives her child a hard time. And the son she alternately kisses and rakes is a very touching and vulnerable kid.

Margot at the Wedding is a harsh movie, more urgent and more wicked than Baumbach’s last. The final 15 minutes seem out of control, even badly cut, as the group leaves the island and gets caught up on the mainland. However, the shrewd finale has it both ways without being spineless. Margot’s clingy maternal side is just as bad as her startlingly narcissistic side.

And there’s a real victory of love and forgiveness in this picture—a small sweet triumph salted by Black’s almost Lucille Ball—worthy scene of comic weeping. It’s a humane movie after all. Baumbach favors emotional breakthroughs over the brutal honesty and clarity Margot thinks that she alone possesses.

‘Margot at the Wedding’ opens at select North Bay theaters on Friday, Dec. 7.