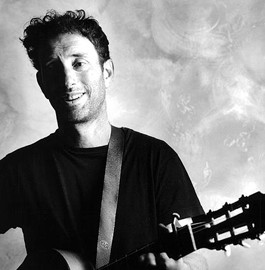 Running the picks on Jonathan Richman

A few years back, Petaluma’s Mystic Theatre faced a minor show-business crisis: the scheduled opening act for John Hammond canceled at the last minute, just hours before curtain time. The owners paced the sidewalk outside, wondering what to do, when they spotted a familiar face in a nearby restaurant window: look—Jonathan Richman! Would he like to walk down to the theater after dinner and play for a packed house?

Richman, aka the Most Sincere Person Alive, leapt into action, borrowed a guitar from the nearby instrument store and, aided by a slapdash rehearsal with Hammond’s drummer, turned in a surprise performance that had the unsuspecting crowd howling for more.

Jonathan Richman has written so many great songs that it’s tempting to say that I don’t know where to start. But that’d be a lie, because I do: “Back in Your Life,” from the album of the same name. Quite simply one of the most innocent songs ever written, it evokes the simple life of rural Vermont, replete with covered bridges and maple syrup, in a cajoling, desperate plea to win back the heart of a former love. Like most of Richman’s songs, it’s just three chords and a huge heart on his sleeve, but it’s enough.

Song two: “The Lonely Financial Zone,” which finds our lonesome wanderer out in the middle of the night, gazing upward at dark skyscrapers full of empty offices. Richman usually makes merry of those banal locales where dread is the daily special (“Rockin’ Shopping Center,” “Abominable Snowman in the Market,” “Government Center”). Yet in the lonely financial zone, the humbled wonder and funerary march of the song’s sparse accompaniment says it all: We all sometimes feel like small and weirdly unimportant human beings in an towering tangle of concrete caves.

Song three: “The Morning of Our Lives,” possibly the greatest pep talk ever recorded; it zings straight to the core of what being young is all about. Song four: “New England,” a joyous sing-along celebration of all things Northeast. Song five . . . Well, you can see where this is going. I may know where to start when it comes to Jonathan Richman songs, but I sure as hell don’t know where to stop.

After that surprise show (which dutifully included the early hits “Astral Plane” and “Pablo Picasso”), I spotted Richman in the theater lobby. So many things ran through my head: Ask about his surreal interview with Space Ghost! Tell the story of the time I played “Roadrunner” at my friends’ wedding as they walked down the aisle! Maybe even ask if he ever got to go back to Vermont to collect maple syrup with his old flame! Instead, I simply said thanks and shook his hand. He smiled widely and said thanks right back—just as sincerely as you’d expect from the Most Sincere Person Alive.