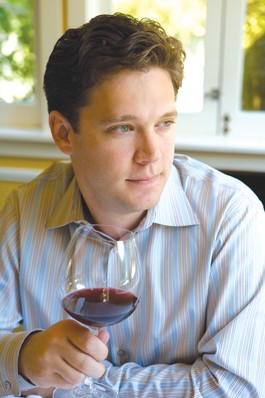 Not Your Average Wine Snob

On a recent Sunday morning in downtown Petaluma, 34-year old Geoff Kruth sits sipping a coffee and looking relaxed in a simple blue T-shirt and jeans. He has a boyishly handsome look to him, not at all what one might expect from one of the world’s most highly certified wine experts, and speaks with an easy cadence. He seems content, chatting about his recent move from Windsor and his two-year-old daughter, but as soon as the conversation drifts to his passion for wine, he’s quick to assure that his life wasn’t always centered around Rieslings and Zinfandels.

After graduating high school in Orange County, Kruth entered Sonoma State University with the intention of completing a degree in music (classical guitar, which he says he hasn’t touched in 15 years). Kruth switched gears midway through and pursued a degree in computer science instead, and smack in the middle of the dotcom boom, he did what many young techies did at the time. “I moved to Silicon Valley and lived in Menlo Park and worked in the tech business for about five years,” he says. “I had a good career, but I spent my spare time and money on wine. Wine was my hobby in college, and that was what I did for fun.”

In the back of his mind, however, Kruth had begun to toy with the idea of opening a wine bar or a restaurant. While working on a consulting project in Connecticut, he drove to New York to have dinner at L’Ecole, the restaurant of the French Culinary Institute. By the time the dessert courses arrived, Kruth had found a new gig.

“I decided I was going to quit my career and go to culinary school,” he says, with a slight shrug and a grin. “Everybody thought I was completely insane.”

Shortly after enrolling in the French Culinary Institute, he began working for the New York restaurant Balthazar for free, moving boxes in the cellar while concentrating on learning the most he could about the wine industry and hitting the books for his sommelier certification. The dream of owning a restaurant faded as Kruth realized his passion was in wine education instead, and he registered for the first level of the Court of Master Sommeliers classes.

Four years passed, and Kruth found himself back in Sonoma County. Having just passed the advanced level exam and studying for the master’s, he landed his current position as wine director of the Farmhouse Inn and Restaurant in Forestville (taking over for Jim Ralston, current wine director at Cyrus restaurant in Healdsburg).

As one might have guessed, this guitarist-turned-techie-turned-sommelier passed his master’s exam. Since its birth in 1969 in England, just more than 170 people in the world have passed this grueling, meticulous tastebud test. Kruth is now one of a small community of extremely dedicated wine connoisseurs who have been able to clear the three-part exam held once a year during which potential masters are grilled for three days straight on service, tasting and theory, in front of a panel. Kruth recalls being given 25 minutes to identify six different wines accurately—three reds, three whites.

It’s an awful lot to put oneself through, Kruth admits, and that’s exactly why a deep-seated passion for wine and a certain intensity and focus is required. “What I’m personally interested in is the connection to farming and culture and life,” he says. “Wine can be a lot of different things, like a luxury lifestyle beverage, but I’m not really interested in that.”

He continues, “But, that’s obviously part of the service business. You need to be of service to people who are interested in wine from that perspective, because that can be a lot of your business.”

Watching a sommelier in action can feel a bit like watching a magic show or a palm reader, but the way Kruth lays it out makes it sound more like a math equation.

“Usually, when I pick up a glass of wine”—with this, he picks up his coffee cup, swirls it, and smells it like it’s a glass of red waiting to be pegged—”I’ll smell it and know what it is. The grape, country, region and a reasonable guess on the vintage. But if I were sitting in a master’s exam, I wouldn’t try to do that at all. You want to take your judgments out,” Kruth explains, adding that his approach to wine identification is highly analytical. “There are specific things I look for in the color, the aromas, the flavors or the structural elements of the wine. I basically try to get an extremely objective analysis, and that should tell you more or less what the wine is.”

Such arduous examination might take a half an hour for an average wine drinker to attempt before breaking down and asking for the answer or Googling the damn thing, but according to Kruth, it all comes down to practice.

“If you really understand all the classic wines of the world and how they’re built up—their alcohol, their acid, their tannin levels, the kinds of fruit flavors in the wines, the kinds of secondary flavors, the type of earthiness . . . once you paint that whole picture, most of time it points right to a wine,” he says.

Though it may seem so to an outsider, Kruth insists that he is not a “supertaster,” one of the few people who walk through life with an unusually sensitive palate, discerning every ingredient in a dish or a wine.

“I don’t believe that it’s some magical gift that only a small number of people have,” he says. “It’s training and commitment and having a good structure and good teachers.”

Kruth humbly acknowledges the barrage of clichés related to his work. All training and passion aside, say the word “sommelier” to a group of average people and reactions will most likely range from eye-rolling to looks of disgust. Why is it that even in wine country, “sommelier” conjures images of a pretentious suit and tie, condescension and perhaps an unhealthy obsession with a beverage?

Kruth insists that the perception of sommeliers is changing. “The stereotype that needs to be put to rest is the snobby sommelier looking down on other people,” he says. “If that’s not dead, it’s dying quick. I think things have really changed for the better.”

Kruth has finished his coffee and sits quietly for a minute, capturing all the last bits of latté foam on his finger.

“You know, sommeliers are there to be used,” he says. “I feel like people are sometimes afraid to engage a sommelier because they feel like it looks like they don’t know enough, but if they realize the level of knowledge and passion that sommeliers have to have, and utilize that more, I think they would have a better experience.”

It’s about moving past feeling looked down on, Kruth emphasizes, and seeing that it’s a sommelier’s obligation to be there for the customer. “It’s not about your ego as a sommelier, it’s not about showing someone what you know. I don’t have anything to prove,” he says. “So you have to listen more than you talk and understand what someone’s interest is. It’s really understanding the customer, figuring out what’s going to make them happy.”

For Kruth, being a master sommelier is not all wine pouring and educating the masses on oaky undertones. In addition to acting as wine director for the Farmhouse, he is the director of the Guild of Sommeliers, an instructor for the Professional Culinary Institute, an instructor for the Court of Master Sommeliers and the wine consultant for the Kapalua Wine and Food Festival in Maui. He insists he has no life, but acknowledges that every business has its helping of grunt work.

“It’s just like chefs,” he says, smiling and shaking his head. “Everyone wants to be a celebrity chef, but no one wants to peel onions for 10 hours.”