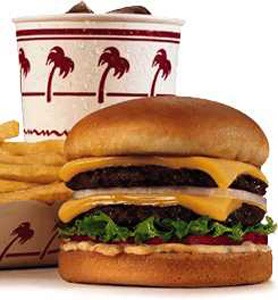 Ordering off the menu is so plebian. It bespeaks such culinary meekness. No celebrity worth his or her admittedly small weight in gold would consider merely taking what the chef has printed out for just anyone to eat. Special foods mean that the customer is worthy of extraordinary consideration. And so it is at Four Seasons, Spago and In-N-Out Burger.

To the regular hungry traveler, falling into an In-N-Out Burger from here to the company’s Irvine headquarters is rewarded by a reassuring sameness to the place, each with a consistently cheery white and red SoCal beachfront look. Ten dollars will feed two hungry people off the regular menu posted for ordinary anyones to use. But just as there is a restaurant at Disneyland that serves cocktails to those in the know, there is a menu at In-N-Out Burger that offers a mostly egregious slate of insider food to those who know how to ask for it.

Take the Animal Style Fries–please. Lovely, salty, crunchy potatoes that never did anyone any purposeful harm find themselves covered with cheese, what the In-N-Out corporate office refers to as “spread,” and grilled onions and pickles if you want ’em. Those carnivores of a higher order may ask for as many patties on their bun as a small village might require, doing just a slight amount of multiplication in the requesting. For example, to ask for three meat patties with three slices of cheese, one orders a “3 X 3”; for four meats with four cheeses, a “4 X 4,” and so on. It is possible to get giddy with the math, getting less cheese than meat (a “3 X 2” for example) or to have an Animal Style burger in which the meat is cooked and then fried with mustard, pickles, spread and onions. We find ourselves scratching skulls at this last incarnation–is it like that old I Love Lucy segment where Fred bakes the chocolate icing right into the chocolate cake, or is it truly animalistic in that it’s hot meat slathered with slidey-offy things?

There is even grilled cheese for those who like everything about a burger except the hamburger, the resulting sandwich served on a bun with all the fixin’s and only American cheese-product holding down the protein fort. There’s also a Wish Burger, a vegan nightmare consisting of a bun, the “spread,” pickles, lettuce and onion if you like them.

French fries may be undercooked (“light”) or overcooked (“well-done”); shakes may consist of a khaki-colored combination of all three available flavors of ice cream (a Neapolitan); and carb-deniers can get the whole shebang wrapped in lettuce. What’s more, the receipt prints out the “secret” menu item you’ve ordered, making it all the less, um, secret.

Remember: you read it here last!

May day in the North Bay