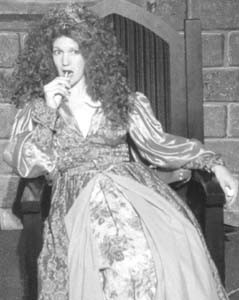 IN SHAKESPEARE’S Hamlet, the melancholy Dane employed a play to confirm the guilt of his fratricidal uncle. Though less grandiose in their goals, two local theater companies–Actors’ Theatre and Sonoma County Repertory Theater–are also courting the skills of playwrights. They won’t catch the conscience of a king, but they do hope to snare the next David Mamet or Tom Stoppard.

Actors’ Theatre’s “New Theatre Works Festival,” which commenced earlier this month, features staged readings of five new works as part of the company’s commitment to putting new voices in front of the footlights.

“The purpose of the New Theatre Works Festival is really simple–to encourage new playwrights,” says associate artistic director Danielle Cain. “Theater history has produced many, many wonderful playwrights, but to keep theater vital and new and part of society you need new playwrights.”

Backed by a play-reading committee culled from AT’s artistic staff, Cain braved the uncharted waters of the dramatist talent pool (the company received 60 submissions) and selected five finalists, one of whom will receive $500 and a possible future production.

“There are many talented playwrights out there, and this is an opportunity for us to encourage them and provide a venue for them to see their work read out loud by good, strong actors,” says Cain.

AT’s staged-reading process often aids the playwright by testing the cogency of his or her artistic intention.

“We don’t have the playwright present at rehearsals, so that when the playwrights hear their work read out loud they will know pretty clearly whether they were succinct and successful in certain areas of their work–or not,” Cain says.

AT audiences are encouraged to address issues about a play with its writer. Cain recently hosted a reading in which participants vehemently disagreed about a new work.

“We’re hoping to find a few playwrights whose work we find exemplary and that we could perhaps engage in a sort of residency as we did this past year with playwright John Moran,” he says.

Eventually, DePriest hopes to find writers who will create new works specifically for his company’s venues.

“As we grow and become more financially secure, we can take more risks on doing new work,” he says.

Indeed, staging works by playwrights who are not name-brand dramatists can stymie box office receipts.

“New plays are risky in some regard, especially when you’re dealing with a larger house, which is essentially our bread and butter,” DePriest says. “With established work, people know what it is. When people accept us for the work we do rather than whose work we do, then we can do more original plays.”

In the meantime, both companies will continue to support new playwrights with their respective festivals.

“It’s almost like a mandate, it’s something we have to do,” says DePriest. “Where else are the new plays going to come from?”