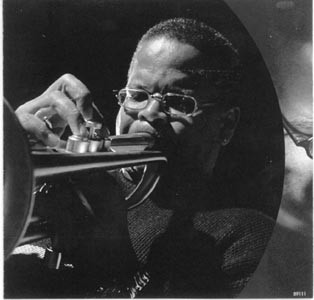 THE VERVE label does its share of aggressively marketing commercial jazz, but also knows when it’s time pay the jazz gods. Signing these two fiercely independent avant-jazz greats to a major label should appease those deities for quite a time to come. Lacy–a recipient of a 1992 MacArthur Foundation genius award and former Thelonious Monk quintet member–earned his reputation as the undisputed master of the soprano saxophone and as a relentless individualist. Trombonist Rudd has contributed to groundbreaking work with Archie Shepp, Carla Bley, Cecil Taylor, and many others. His solo CDs give new meaning to the term hard-to-find, but are well worth the pursuit. Together, these guys are musical magic–settling over the psyche in often challenging improvisations that never fail to live up to the wild spirit of Monk’s dream. File under: jazz–indeed. Catch them Saturday, March 18, at the Noe Valley Ministry in San Francisco at their only Bay Area performance.

AS A ONETIME member of the Miles Davis Band (from 1982 to 85), jazz guitarist John Scofield is no stranger to jazzy funk. But Scofield all but disowned A Go-Go, his much-anticipated but dreadfully uninspired 1998 collaboration with soul-jazz wunderkinds Medeski, Martin, and Wood–the trio also dissed A Go Go in interviews. This contagiously funky instrumental disc–interestingly with MMW bassist Chris Wood on board–more than makes up for the sins of A Go Go.

Known as a hard-driving postbop tenor saxophonist heavily influenced by John Coltrane, the 35-year-old Turner delivers one of the most satisfying collections of jazz ballads in years. His timbre is reminiscent of Trane’s, but Turner has a lyrical sense that surpasses his youth and often reminds the listener of the underrated Frank Morgan. Don’t settle for mundane “dinner jazz” when you can savor Turner’s full-bodied tenor.

PIANIST KENNY BARRON remains one of the most criminally ignored geniuses in the genre. While McCoy Tyner gets a lot of attention these days, despite a technically precise style that is often forgettable 10 minutes after you hear him, Barron has displayed flashes of real brilliance, no matter what the setting. After spending four critical years with Dizzy Gillespie, 57-year-old Barron honed his chops with Yusef Lateef and Ron Carter before recording a CD of brilliant piano duets on the late Stan Getz’s last sessions. His new Spirit Song finds the veteran pianist in an octet with newcomer Regina Carter on violin and with seasoned horn men Eddie Henderson and David Sanchez in an often adventurous series of songs (guitarist Russell Malone shines on the title track). Tyner’s latest disc features some of his prettiest work, but even Stanley Clarke’s long overdue return to straight-ahead jazz fails to inspire him to push the envelope. Still, that’s no reason not to sit back and enjoy the deliciously breezy “Goin’ Way Blues,” which finds Tyner sounding more and more like Vince Guaraldi.

THEY SAY JAZZ is America’s classical music, and that must account for the number of jazz artists drifting over the the Sony Classical signature. The twice-Grammy-nominated trumpeter–known in recent years for such acclaimed film scores as Jungle Fever and Malcolm X–returns to his hard bop roots with his first album of straight-ahead small combo jazz in five years. With a band that features tenor saxophonist Branford Marsalis, bassist Dave Holland, and pianist Edward Simon, Blanchard deftly blends jazz and classical elements to show why he remains the most innovative of the first wave of young jazz lions.

DUKE ELLINGTON once said of Georgia-born pianist, composer, and bandleader Mary Lou Williams, “Her music is perpetually contemporary. . . . She is like soul on soul.” Avant-jazz figure Dave Douglas, considered by some to be the most original trumpeter of his generation, pays homage to Williams, who died in 1981, with four Williams covers and several exuberant originals rhythmically inspired by the late jazz great, one of the few jazz instrumentalists to gain acceptance in the male-dominated jazz world of the ’40s, ’50s, and ’60s, and one of the few female bandleaders of her time. This release may be the premiere event of Women’s History Month. Highly recommended.