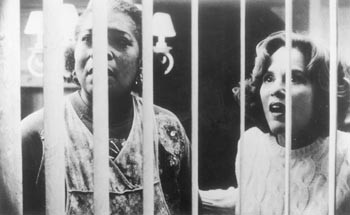 ‘Judy Berlin’ is everything that ‘Magnolia’ wanted to be

MAYBE IT’S BECAUSE it was shot in black and white. Or blame it on the fact that it doesn’t star anyone under 30, or that its biggest names are only semi-famous performers like Madeline Kahn and Bob Dish, or that its delicate, shadowy mood might feel depressing to the shallow viewer.

But whatever the reason, the 1999 film Judy Berlin didn’t find a distributor until it received a brief showing this month in San Francisco. Now, starting March 17, it comes to UA 5 in Santa Rosa.

The first feature film from director Eric Mendelsohn, Judy Berlin is a comedy with a compassionate sensibility. Yet it’s not at all mushy. Mendelsohn boasts a particular mixture of open eyes and open heart that is almost extinct in today’s film world.

The film takes place during a morning and afternoon in Babylon, a New York City suburb. A housewife named Alice (Kahn) awakes, trilling her love for her husband (“My paramour!” she calls him). But Arthur Gold (Dish), her husband, is nobody’s idea of a paramour. He’s a middle-aged elementary-school teacher facing a sunless day at work, and he looks at her, unable to comprehend her mood.

Watching the couple is their son, the bitter comic relief in the marriage. David (Aaron Harnick) is a budding filmmaker who has recently moved back into his parents’ house from Hollywood. What happened to David on the Coast isn’t described. It doesn’t have to be. From his look of dejection, we can tell that he’s certainly had his ass handed to him by the film industry.

Facing a day of wandering, with the idea of making a documentary about suburban Long Island, David encounters a woman from high school: a naïve aspiring actress named Judy Berlin (Edie Falco of The Sopranos).

Judy is planning to catch a plane that night to Hollywood to make it big. David, who can’t bear to disillusion her, is heavy with the knowledge of what awaits her there.

The day is interrupted by a total eclipse, which doesn’t end. The strange phenomenon, which only mildly puzzles the characters, reflects their strayed happiness.

Judy Berlin gives us the last of Madeline Kahn, who died last December. Alice Gold is Kahn’s best performance. She shows her usual humor in the fussy, interfering quality of Alice. But this role is comedy on the edge of tragedy. All day long, Alice is pestered by a childhood rhyme she can’t remember, and she has pushed a bit of her own bad behavior right out of her mind.

Falco, a goofy Long Island sprite, leavens this astonishing debut film. Far more than a caricature of a bad actress, she turns out to be the smartest person on the screen. There’s hope here, and that sense of budding possibility makes Judy Berlin everything Magnolia sought to be. Here’s a mix of lost people, caught in coincidence, tied together by a magical-realist event.

At times, Judy Berlin is as elating as the films of the great humanist directors: Renoir, Ophuls, and Mizoguchi. Mendelsohn takes elusive experience and loss and distills these fragile emotions as only an extraordinary director can.