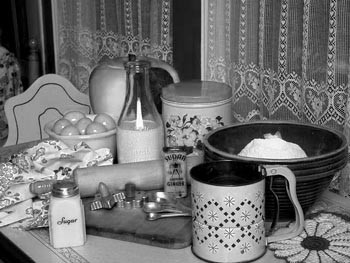 The joys of sharing the pot

IN FOOD, as in everything else, we reject our parents. It starts as early as the high chair, with screaming and strained carrots, and continues until we leave home, swearing that we will never eat that bourgeois swill again. But give us a circle of hungry friends, a limited budget, and a desire for something other than Top Ramen, and we invariably arrive at the solution that generations have turned to: the potluck.

My friends and I discovered potluck in our sophomore year of college, that awkward time of life when the dormitories no longer wanted us, but somehow we still needed to eat every day.

On the outside, our potlucks looked nothing like the church dinners of our parents’ generation–brown rice and soy sauce vs. instant rice in mushroom sauce–but they served the same function: a reminder of community, a dinner-table declaration of interdependence.

One boyfriend of mine, for example, could barely make ice cubes, but he played a raucously funny bluegrass guitar, so we let him play and fed him well.

Those potlucks went beyond socializing: they socialized us as well. They taught us to be on time (if I was late with the main dish, all these other starving students would starve for an extra half hour!). They taught us how to shop for things other than corn chips and canned soup.

Above all, they taught us diplomacy and tact. Let’s face it: young adults can be really rude, and some of the dishes brought to our gatherings probably deserved to be roundly mocked for their appearance and inedibility. But we never dreamed of criticizing each other’s food; we didn’t even have a framework for that. We knew nothing yet of flavor affinities or textural contrasts.

All we knew was that we were trying to take care of each other, and if the final dish didn’t fully express the cook’s regard, well, we didn’t take it personally.

The fault was in the translation; effort was what counted. We ate each dish with a deep, if inarticulate, appreciation for the intent that brought it forth.

Of course, good feeling alone does not feed the hungering hordes. As it turned out, research and planning, which defined our college education and drove us nuts, were the very elements that held our feasts together. A strictly laissez-faire approach to potluck brings on the worst sort of luck. Like the Titanic, an unplanned potluck could grind to a shuddering halt, with five tubs of store-bought baba ganoush languishing, pita-less, near three six-packs of light beer. After a couple of such disasters, we delved into The Moosewood Cookbook and Diet for a Small Planet, and explored mixes of tabbouleh and different kinds of salsa. We derandomized the occasion and imposed order on chaos, with phone calls and scribbled charts and lists, sometimes loaning cookbooks in a broad sort of hint.

SO WHY the hassle? Well, it was a little cheaper, in both time and money. Cooking for four or eight takes about as much time as cooking solo (unless you’re doing something with phyllo dough, which was way beyond us, anyway). And since nobody would ever say anything about the results, potlucks were always a great excuse to experiment a little. We all learned a lot in those days, thanks to potlucks. We learned to line our burners with foil, and line our stomachs with something a little oily before pouring any strong drinks. We learned about French presses and tequila poppers, falafel and wild rice. We learned about complementary proteins and room-temperature salads. New ingredients and condiments, such as pesto and chutney and sesame seeds and pepperoncini, emerged at these semi-festive gatherings.

In fact, my first encounter with raw fresh garlic, as opposed to powder, occurred while I was preparing a lentil soup for one of our potlucks.

Heloise would have been proud of the conclusions we reached on our own. But there was no other way to learn. Coming from our mothers, it would not have carried the same weight. We would have brushed off the helpful hints and recipe cards as carelessly as we’d knocked the strained carrots away 18 years before. No, some things need to be learned through trial and experience, some instincts aroused through exposure to the most fundamental choice: share or starve.

SO WE DID. Share, that is. Many of our landmark events–engagement parties, St. Patrick’s Day, finals weekend–were marked by these collective dinners. My girlfriend and I even did potluck for the reception that followed our commitment ceremony. The whole event was BYOE: Bring Your Own Everything. One friend planted cheap annuals along the backyard path that led to our ceremonial space. Another laboriously hand-stitched a memory wall hanging, with the date of our ceremony and a pocket for fabric pens.

We assembled and decorated our own cake, complete with two brides in a lopsided cloud of butter-cream frosting, but the rest of the food was brought by friends and family: piroshki and vodka from my new mother-in-law; crudités from housemates; crackers and cheese from a mutual friend. A fellow from one of my political-action groups outdid himself with fresh figs stuffed with cream cheese. Other than that, it was a simple reception. The food fit (barely) on our kitchen table, and love flavored every single bite.