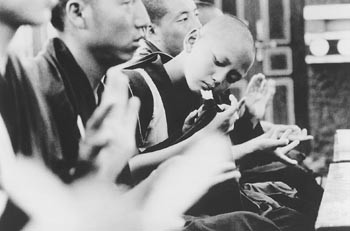 SOCCER FANS don’t have the best reputation, but you’ll probably never find a group of soccer fanatics who exert more self-control than those in The Cup, a film inspired by the true story of how a Tibetan Buddhist monastery got caught up in 1998 World Cup fever.

Writer/director Khyentse Norbu, himself a Tibetan Buddhist lama (said to be an incarnation of a revered religious reformer), helms a cast made up almost entirely of practicing Buddhist monks who live at the monastery where The Cup was filmed.

The inexperience of the actors doesn’t really show, but The Cup is slow going at times–this is, after all, pretty much an entire film about monks deciding to watch TV. But Norbu carefully and quietly unfolds this simple tale, and that isn’t all bad in these days of the much-abused jump cut. In fact, this slower-paced storytelling offers a contrast with most Western styles, further illustrating a major theme of The Cup: how the outside world encroaches daily on Tibetan Buddhist religious life and how the monks find ways to adapt to it.

The Cup is set in a Tibetan monastery-in-exile in India, home to monks who have fled or been forced out of Tibet. This monastery offers a kind of political sanctuary, as well as a spiritual one, taking in Palden and Nylma (Kunsang Nyima and Pema Tshundup), two refugee boys from Tibet. The film incorporates many scenes of Buddhist rituals, which add striking visual interest.

Unexplained as they are, these religious rites seem just as mysterious to new arrivals Palden and Nylma as they must to an audience largely unfamiliar with Tibetan Buddhism. We don’t really get much of a sense of the boys adapting to their new lives, beyond their befriending some young monks obsessed with soccer, in particular Orgyen (Jamyang Lodro), who organizes secret trips to the village to watch the World Cup playoffs.

And among the younger monastery residents, Norbu hits on a theme even more universal than a passion for soccer: that kids will be kids. Harmless mischief abounds among the young monks. The boys’ antics earn them plenty of punishment, meted out by the stern headmaster, Geko (Orgyen Tobgyal), but he shares their love of soccer and eventually obtains consent from the abbot for the monks to watch the World Cup final on a rented TV.

Certainly, it’s a little startling to see a bunch of monks rigging up a satellite dish on the roof of their monastery–the incongruity of it reminds me of the priest who swore like a sailor at a funeral I once attended. With Tibet being a Hollywood cause célèbre–and Buddhism the religion du jour–it’s interesting to see a Tibetan reaction to Western culture. Neither gratefully nor regretfully, The Cup responds to the West with a shrug of resignation. The film itself invites the same kind of amiable ambivalence.