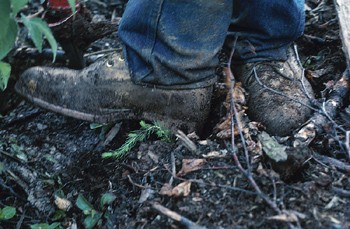 Boots Are Made for Walkin’: This just in: The good guys do win a few, at least wben it comes to a riverine trail in Napa.

Tale of the Trail

Any time a community comes together to accomplish a project for the greater good, the smart money knows that along the way there will be obstacles to overcome. The Napa County Flood Control Project has had its share of obstacles. The latest emerged late last month when a small portion of the proposed trail that will skirt the river’s west bank from Trancas Street on the north side of town to the southern crossing near Highway 12 appeared doomed. At issue was a disagreement over design and functionality, exacerbated by a lack of funds and a tight construction schedule city officials were loath to abandon.

The controversy centered on a three-block portion of walkway in downtown Napa running from Fourth Street to Riverside Drive. While the section represented only a fraction of the proposed trail’s length, the close proximity to downtown made it vitally important. Supporters saw the segment, which would lead hikers around some of the hottest real estate in the city, as crucial to revitalizing Napa’s traditionally sluggish downtown business climate. Tracing a gentle bend near the city’s downtown dock area, the planned portion passed directly by Harry Price’s recently renovated Napa Mill Project, the historic 1884 Hatt Building, the Hatt Market and the Napa River Inn. City officials had hoped it would draw tourists to the downtown area. Then came news that marked the end of the trail–or at least that section of it.

“We were alerted a few months ago that the U.S. Army Corps of Engineers was making plans to reroute the river walk just below the Third Street bridge,” says Bernhard Krevet, president of the executive board of Friends of the Napa River. “Hikers would have to detour up the river bank, across parking lots and down Main Street to access the trail again at Riverside.”

The problem stemmed from the Corps’ claim that the flood plan design called for a wall to be built around the riverside base of the Hatt property. The structure would serve as support for the riverbank and Price’s property. A second wall provided support to a cantilevered walkway that would extend out to the river, and corps engineers claimed the walkway was infeasible.

Friends of the Napa River contacted Price, who told them that he constructed the foundation of the Hatt Mill Project with the understanding that the cantilevered walkway would eventually be built. Along with other members of the Napa business community, Price expressed concern that losing the river walkway at that point on the trail would minimize the usefulness of the walkway as an attraction for tourists and visitors to the downtown area.

“To lose this portion of the river walk would be like having the cupcake without the icing,” says Craig Smith of the Napa Downtown Merchants and Professional Association. “This stretch of trail is . . . a riverside view of historic downtown Napa. It would be a shame not to have this portion of the trail.”

After consulting the original plans drawn up in 1995, Krevet found that funds were allocated for a walkway as well as plans to build it in accordance with Measure A, the citizen-ratified funding measure passed in 1998. Krevet and other walkway supporters traveled to Sacramento to speak directly with the design firm responsible for the project’s construction plans. The firm’s engineers determined the plans for the walkway met design specifications and could be built.

Krevet returned to Napa and presented the conclusions to the Corps, who accepted the findings that the walkway could be built, but raised other concerns. For one, the Corps estimated the cost of the walkway between $300,000 and $500,000. Claiming the proposed span was not a necessary part of its flood-control plan, the Corps refused to pay the added cost for what is essentially an enhancement of the river walk project. Those concerns, coupled with the added fears of some flood-control officials that building the controversial stretch of walkway would extend the overall timetable and possibly jeopardize federal funds, placed the trail’s future in limbo.

Few would argue that the $255 million Napa River Flood Management Plan to tame the wily river’s periodic destructive nature is not without merit. Over the years, serious problems due to flooding, especially in the downtown area, have stymied attempts to revitalize the area. The flood project found life in 1995 when a group of local townspeople formed the Friends of the Napa River, who then joined forces with the Corps of Engineers, laying down a list of major objectives they hoped to accomplish.

Reconnecting the river to its historic flood plain was chief among those goals. The project offered citizens not only safety from flooding but the opportunity through stewardship to enhance the health of the environment and, by extension, the city’s appeal to new commercial enterprises. As June came to an end, those goals began to seem like a distant dream.

But a flurry of meetings ensued, bringing together river and flood-control organizations, city leaders and staff members of Rep. Mike Thompson, D-Napa. Eventually, the groups came to a consensus, and the Corps and the Flood Control Project agreed to allow supporters of the trail to proceed with plans to have the walkway constructed, with the caveat that construction does not slow down the completion of the overall flood control project or place federal funds in jeopardy. They also required plans for the design to be drawn up immediately to allow construction to begin as soon as possible.

The project received an immediate boost when Napa mayor Jill Techel pledged $200,000 of city-redevelopment funds to the beleaguered trail. Noting that the walkway’s final cost is still not known, Krevet said “the community in the past has shown support” in helping fund the river walk project. He predicts the trail will meet the proposed deadline and be built according to plan.