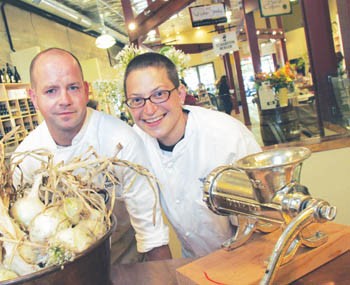 ‘I‘m sooooo glad I spent 45 minutes fixing the weed whacker this morning,” says an obviously irritated John Stewart, holding the broken trimmer in his hands. The thing’s refusing to work despite 15 minutes of cajoling, tinkering and pleading by the chef turned handyman. Snickering comes from the kitchen over the boss-man’s plight.

“I’d seriously fire him for that if I could,” Stewart says in mock aggravation within earshot of the sous-chef who continues to taunt him. The co-owner of Santa Rosa’s Zazu restaurant passes behind the bar where his wife and chef co-owner, Duskie Estes, stares down at a pile of receipts and timesheets. He continues his faux tirade. “Can I fire him for that? I really would if I could. But I have to go play plumber now.” Stewart heads for bigger problems in the direction of the restaurant’s bathrooms. The night’s just beginning, and already the weeds have won and plumbing is putting up a serious fight.

“This is such a glamorous job,” he says, turning the corner.

It’s Stewart’s third shift of the day, and the dinner service at Zazu is just beginning. It’s anyone’s guess as to what else will break, melt, self-destruct or implode before the night is through.

You wouldn’t know it to look at the couple–both clad in wrinkled, food-splattered T-shirts as they rush between bar, table and kitchen–but these two thirty-something chefs are among the most promising food talents in the country. From raising much of their own produce to curing their own meats, making their own gelato, compiling their daily menus, working the line, seating diners and, well, fixing the plumbing, the couple do pretty much everything themselves (with the assured help of a small staff). And, despite the grueling hours and sometimes thankless tasks, that’s exactly how they want it. And it just may be why they’re succeeding in one of the toughest businesses around: owning a restaurant.

For nearly the last five years, Stewart and Estes have been tirelessly building a sort of food empire, though they’re still not exactly sure how it will turn out. The foundation is Zazu, which opened just two weeks before Sept. 11, 2001. The couple, who were both well-respected chefs in Seattle’s restaurant scene, decided to move to Sonoma County on something of a lark when the former Wildwood restaurant came up for sale.

Within just a few weeks, they had turned the restaurant around and opened for business, even though Estes was interviewing staff while breastfeeding a newborn and working the stoves with a baby backpack on. There were some early naming issues (the restaurant was originally called Zuzu, which is trademarked by another restaurant), staff problems (they once had to do 90 meals by themselves in a single night when a sous-chef didn’t show), and the mixed blessing of dealing with the gushing critical acclaim that can often hit unexpectedly. When the San Francisco Chronicle reviewed Zazu last year and named it one of the top 100 restaurants in the Bay Area, response was almost crushing.

As things started to calm down last year–as much as the restaurant business can ever calm down–and people began to again eat out more often, Estes and Stewart started entertaining thoughts of opening another place. Turns out that Ridgely Evers, the owner of DaVero Olive Oil and the impetus behind Plaza Farms (see Sidebar below), was considering the very same thing.

“They were the first people we thought of,” says Evers. In June, Stewart and Estes’ second restaurant, Bovolo–which means “snail” in Italian–opened inside of Evers’ new Plaza Farms in Healdsburg. Bovolo features simple salads, pasta, pizzas and gelato with a “slow” food focus, after the popular Italian Slow Food movement that highlights local, sustainable agriculture and farmers.

Stewart bristles at the idea of Slow Food being merely another food trend. “It’s just a good idea,” he says, now in motion at Bovolo’s kitchen, building salads and checking the kitchen smoker behind him. “It forces us to pay attention to the food, the plants. It’s the opposite of big-scale farming.”

As a third-generation chef–both his father and grandfather owned catering businesses–it’s easy to see that Stewart can’t be bothered with what’s fashionable, cool or trendy. He’s too busy, and he’s got a much more interesting calling: namely, pigs. Hauling out three huge slabs of bacon from the smoker placed behind the cramped mis en place in Bovolo’s kitchen, he handles the meat with a sort of reverence. When a customer inquires about his homemade salumi (describing the broader category of cured meats, including salami), Stewart practically beams, pulling out rope after rope of herb-infused boar and pig, slicing them delicately and plying them into eager hands.

“Welcome to the house of pork,” quips Zoi Antonitsas, Bovolo’s sous-chef. In fact, Bovolo is a sort of halfway house for Stewart’s third–and possibly most enthusiastic endeavor yet: Black Pig Meats. Trained by superstar chef Mario Batali and his father Armandino Batali, Stewart is an expert in the art of curing meat. He routinely breaks down 450-pound pigs and smokes, cures and either sells them to the public or uses the meat at his restaurants.

“John is as good a salumer as I’ve encountered in the U.S.,” says Evers, who, like all the other occupants of the Healdsburg space, gets gentle wafts of smoke and meat throughout the day as Stewart opens the smoker. “He’s got a pig tattooed on his arm, after all. The guy has a passion for pork,” Evers says.

Stewart does, in fact, have a tattoo of a pig on his arm. With numbers identifying each cut, the image is in deference to his mentor, Armandino Batali, of Seattle’s acclaimed Italian deli, Salumi.

“Sorry guys,” shouts Stewart to his neighbors on a Sunday afternoon after he’s opened the smoker some five or six times. The aroma is heavenly. Stewart sells the bacon for “whatever Niman [Ranch] sells it for. I figure I’m at least as good as them.” Currently that’s about $14 a pound.

No one seems to mind the smell. “If I had my druthers, the place would be filled with smoke all the time. I love the smell of curing meat. It’s tough to get better than that,” says Evers.

With all the accolades that Stewart and Estes seem to get wherever they go, it’s hard not to wonder what their recipe for success is, especially when solid chefs like Randy Lewis of the now-defunct Popina and seven-0-seven has failed not once but twice in a similar market.

Estes, whom Stewart describes as the more creative half of the team–brilliant at whipping together menus and big ideas–is pretty down-to-earth about the whole thing. With a newly shorn buzz-cut and a pierced nose, she’s every bit the veteran chef who tells it to you straight. “You have to be a fighter. And never stop fighting and never give up,” she says, sitting at the bar with the finances as she trades stories with the waitstaff and keeps a sharp eye on the restaurant.

Evers says it’s both presence and passion. “Sometimes you say, ‘Nobody in the kitchen loved this food.’ To make great food takes passion and, frankly, love. You have to really care. You just can’t be going through the motions. That’s the reason [Stewart and Estes’] food is as good as it is. It’s a hands-on process.”

Stewart sees it a bit less philosophically. “You know what? This is extraordinarily hard work.

So many times people think it’s a cool lifestyle, or think that they can do this because they’re good at throwing cocktail parties. That’s not it at all,” he says. After waking up at 5:30am, fixing a weed whacker, hauling around 50 pounds of bacon, making dozens of salads, tossing countless pizzas and then trying to figure out the plumbing, he laughs. “But you know what? I don’t see myself doing anything else,” he says and heads for the kitchen.

Healdsburg’s Plaza Farms pulls it all together

Ridgely Evers, the owner and founder of DaVero Olive Oils, is nothing if not honest. “If Stanford Business School ever got a hold of the business plan for Plaza Farms, they’d revoke my MBA,” he says of his newly formed agricultural and food cooperative located just off of Healdsburg’s plaza.

With just a handful of mostly small, artisan producers like cheese maker Bellwether Artisan Creamery; the Tandem, Philip Staley and David Caffaro wineries; the Sebastopol-based tea company Teaspots; restaurant Bovolo; Scharffen Berger chocolates; and the Healdsburg Farmer’s Cooperative (along with Evers’ own DaVero Oils), Plaza Farms pools resources and staff to promote a sustainable, artisanal philosophy of food. And for these local microproducers that’s all-important. But maybe even more important is the idea of eliminating the middle man.

“Most people don’t understand,” says Evers, “that for a $24 bottle of olive oil, I’m only making about a dollar. The rest goes to the store and the distributor. If we only make 12,000 bottles a year, well–you do the math.” Most of the other small artisan producers are in the same boat, not being able to afford high-profile tasting rooms and distribution on their own. The cooperative was the perfect solution, says Evers.

“This is where real sustainable farming starts,” he claims. “Plus, we really wanted to keep the space from being a Gap. Because that’s the last thing in the world we need.”