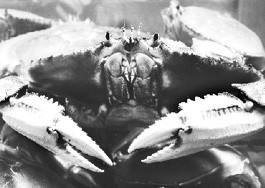 Mutiny of the Bounty?

The ocean floor west of Marin is once again crawling with Dungeness crabs, and for the fourth winter in a row, commercial fishermen have hauled up large early-season numbers. Since the opening day on Nov. 11, the Bodega Bay fleet of about 40 vessels has delivered approximately 500,000 pounds to the harbor’s dock, suggesting a prosperous season ahead.

“Locally, we’ll receive 700,000, up to a million pounds in a bumper year,” says Mike Lucas of North Coast Fisheries, based in Santa Rosa. “We’ve got more than half a million, and this is only two weeks in. It’ll slow a little, but we’re going to get a lot more than a million this season.”

The big hauls come as much-needed relief for many fishermen who took a hard financial blow during the tightly regulated Chinook salmon season, which ended at the beginning of November. The high numbers of Dungeness crabs also have many biologists and fishermen somewhat surprised, as they’d been expecting a crash in the fishery for several years. Graphs and charts compiled from records dating back to the 1940s show a cyclical pattern in crab landings, with peaks occurring every decade or so.

“There was a nice tight cycle from the 1940s through the 1970s, a nice sine wave,” says Pete Kalvass, biologist with the Department of Fish and Game. “Then it got a little weird in the ’80s and ’90s with some of the El Niño events, and since then it’s just gone off on a big climb.”

Each of the past three seasons has produced over 20 million pounds of Dungeness crab statewide, twice the long-term annual average. The catch is shared between some 400 boats between the Oregon border and Monterey, with a few crabs coming from Morro Bay and Santa Barbara. Meanwhile, Oregon, Washington, British Columbia and Alaska have seen similarly high catch rates in recent years.

“Some people think we might be in a long-term climate regime change that’s good for the crabs,” says Kalvass.

Lou Botsford, a professor of biology at UC Davis, studies Dungeness crabs and has given particular focus to the crustacean’s larval stage of life, during which the baby crabs float through pelagic, open ocean zones as plankton.

“This increase in crab abundance seems to stem from a shift in ocean conditions that started in ’99 and went through 2001, 2002,” he says. “Four years is the time it takes for crabs to grow from the larval stage into the fishery. The first really good year was 2003, so that’s a four-year delay from ’99, which suggests that the positive effect has been on the larval stage.”

Botsford reports that the years of 1999 to 2002 were dominated by cold-water, La Niña conditions, the opposite of the warm-water El Niño phenomenon. Dungeness crabs, which do very well as far north as the Gulf of Alaska, are a cold-water species, and to many scientists, the correlation between La Niña and the heightened population four years later makes good sense. By the same line of reasoning, some biologists are predicting that the warming of the waters experienced in 2003–an El Niño year–will be reflected by a drop off in the 2007-2008 crab season.

“What goes up must come down eventually,” says Kalvass. “But to what level, there’s no way to know.”

But along with the good news this season there comes some bad. The government officially declared the past Chinook salmon season to be a fisheries disaster, prompting fishermen to expect relief funds to help them through what they consider to be a financial and ecological mess created by the federal government itself. Less money than anticipated has arrived, however. While a strong crab season could put fishermen on their feet again, Chuck Wise, who has fished locally for four decades, says current prices are far from premium.

He attributes the price drop to large seafood receivers who have essentially monopolized the market in recent years. They occupy the ports and wait for the boats to return, and in the near absence of other seafood companies, competitive pricing is long gone.

“They basically set the price for everything, and for four or five years now the holiday crab rush has been junked for us. That’s what this whole fishery was about, but not anymore.”

Wise says this season’s fishing started out fast and promising, with the heaviest hauls coming from the Point Reyes region, between Double Point and Bolinas, five miles to the south.

“But already it’s starting to dry up. There’s been a lot of pressure, a lot of boats.”

Many vessels, he says, come from Northern California, Oregon and Washington waters. These are fishermen whose season usually does not open until December and who have historically come south to get in on the Central California action before returning home for their own opening day. A delayed California opening last year dissuaded this flood of out-of-state fishermen, and Wise says the fishing was hot and long-lasting as a result.

“Those guys weren’t here last year, and I was able to fish until June,” Wise says. “Usually, I don’t go beyond February. But this year, we’ve only been fishing for a week, and we can see already that we won’t be pulling crab gear every day.”

There was talk before this season of a walkout, according to Dave Yarger, president of the Fishermen’s Marketing Association of Bodega Bay. Yarger says that many in the local fleet hoped to go no less than $2.25 per pound for live Dungeness crab, but with the financial stresses of the poor salmon season still shadowing most fishermen and their families, going on strike was not an option. The season had to begin.

“There was no money from the salmon,” says Yarger, “and that’s part of what pressured the boats into going fishing. We also wanted to be sure that people got their Thanksgiving crab, and I hope they got a good deal. I heard it was $4.99 in some stores. That’s not fair. That’s a big markup. It’s funny–we’re the only guys involved who can’t mark up the price.”

Mark Neugebauer, captain of the 36-foot Betty J, says that out-of-state vessels helped to spoil the strike, too.

“We were trying to go on strike, but there was this big boat, a guy from Washington, who said, ‘To hell with you, I’m dropping my pots. Screw all of you.’ He had a thousand pots, and once that many are in the water, you have to get out there and fish. So we all had to race out there and get screwed with the price. That guy is not a part of our local association, and he came down and just made a mockery of our whole democracy here.”

Neugebauer, who keeps no more than 150 crab pots soaking at any given time, has bypassed the retailers and markets his entire catch straight to consumers from the dock in Bodega Bay’s harbor. He sells the crabs at $6 each; about $3 per pound. He receives a better price than if he were to sell to the seafood receivers, he says, but the tradeoff comes in having to sit out an entire day of fishing to make the face-to-face transactions.

“The other guys here come in and just drop off the crabs, get paid and are done with it. I have to spend all day, but it’s not really that big an inconvenience, since I live on my boat.”

The Dungeness crab season lasts through June. The best deals, for both the fishermen and consumers, are to be found at the dock, where the crabs are sold live, healthy and fresh. Princeton Harbor near Half Moon Bay offers an off-the-boat market, as does Fisherman’s Wharf in San Francisco and the harbors at Fort Bragg and Bodega Bay. As the season progresses, fishermen pull their pots with progressively less regularity.

Also, look for the “Fresh Crab for Sale” signs that appear when the boats come back to harbor, usually located at the corner of Bay Flat and Eastshore roads. To contact fisherman Mark Neugebauer of the Betty J in Bodega Bay, call 707.621.4646.