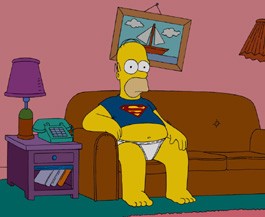 On Loving the Simpsons

The father is fat, bald and alcoholic. The son is a 10-year-old criminal. The drawings are minimal. From that start, the next evolution in animation began in 1987.

It’s been two decades since The Tracey Ullman Show ran a series of short cartoons concerning the day-to-day misery of the Simpson family from Springfield, U.S.A. To this day, David Silverman, founding director and now supervising art director on the animated series The Simpsons, is hesitant, at least in interviews, to say why everybody loves the family.

“They have no life,” Silverman jokes over the phone while working on the much-anticipated Simpsons movie, due for release next July. He then asks a room of his fellow directors why the Simpsons are so beloved as to be subjects of the longest running sitcom on television. From across the room, director Mike Anderson delivers the perfect promo statement: “People see themselves in the family. They relate to the characters.” Silverman makes me credit Anderson with that quote, then adds, “It’s also damn funny.”

Silverman is coming to Sonoma State University on Dec. 1 to speak about the show and its impact on the culture. For a mere 10 bucks a head, audience members can hear Silverman share stories on the innumerable reasons why The Simpsons has cemented itself in the minds of generations of fans. The show will consist of Silverman’s overall perspective of the show and his growth from animator to director and supervisor. He says, “We have people working here who are like, ‘You were here from the beginning,’ and it’s not something I think about. College kids, who grew up on us.”

The road from a spate of two-minute shorts to 17 seasons as the best comedy–animated or not–on television has marked Silverman’s journey with the show. “I don’t know how I could have a wife and kids and stay up until three in the morning animating,” he says. Matt Groening, Wes Archer and Silverman animated those original shorts themselves. Silverman directed the first broadcast episode, “Simpsons Roasting on an Open Fire,” and the show became an immediate success. That success became a phenomenon and a cultural barometer and even a college-instructed philosophy. The only show that has more episodes in the bank than The Simpsons is Gunsmoke–and there are no classes on Gunsmoke at major universities.

Silverman is credited with giving the show its unique look and feel. While Matt Groening designed the characters in the mid-’80s, Silverman gave them movement and life. He pioneered animation techniques, transforming the rough edges of the first season into the polished show that airs today. He has directed milestone episodes and now is at work on the film version, so far known simply as The Simpsons Movie. He says of his animation staff, “Everyone, down to the storyboard artists, takes pride in what they do. Our biggest challenge is always the deadline. We want to blow everyone away.”

Part of Silverman’s SSU lecture will include showing unseen clips from the show. “I used to have a lot of those clips,” he says, “except the DVDs have come out and I’m down to a few. I still have some, though.” There will be question-and-answer periods, too. “It’s very inspiring and rewarding to engage directly with the fans. We don’t get that enough.”

Most of the lecture will focus on animation, which Silverman speaks of as a process of challenges and benefits. “From one point, we do a lot more animation per episode,” he says. “It’s more difficult, but we also get more resources and time. I am happy to report the animation has improved. The writing has also improved, but from the animation side, we pushed ourselves.” The complexity, attention to detail and the speed of the animation continues to grow, and the show looks better every year.

Most people think all the animation is done in Korea, but that isn’t true. The Korean animators only paint and touch up the look. Silverman’s team animate every movement and nuance, down to the twiddling fingers and rolling eyes. “Nuances are what get the big laugh,” he says. “It’s worth it to try and put in another hour or two on this or that. It really pays off.” The animators build the show from pencil drawings into an animatic, which serves as a sketch of the entire scene or episode. Often the animatic contains most or all of the animation before it is sent over.

Aside from the catchphrases and merchandising, The Simpsons has become a standard against which new comedies must set themselves. Shows like Family Guy and other animated fare simply would not exist without The Simpsons, which was considered a second renaissance within the animation community, a new precedent in the genre. A seemingly simple yet incredibly focused combination of satire and off-the-wall silliness makes The Simpsons the ruler of television comedy. “The human ego is the root of all humor,” Silverman says. “We don’t just pick on specific groups. We spotlight and point out the humorous–not stupidity, but ego.”

Certainly, over the years, other shows have passed The Simpsons in terms of edginess. Silverman acknowledges South Park. “That is edgier. It’s as if we raised the bar, and the bar caught up to us.” Yet The Simpsons survives precisely by staying true to its characters and their world.

Silverman does not believe in lowering standards to appeal to a mass audience. The range of humor in The Simpsons is unparalleled. Family sitcoms, like Everybody Loves Raymond, focus on one area. For example, a typical plot has the husband and wife fighting about something, other relatives making jokes at their expense, a solution presenting itself and the husband and wife resolving their dispute. In contrast, The Simpsons‘ world encompasses over 50 characters from all backgrounds and perspectives, each of whom wittily sends up some aspect or stereotype of American family and cultural life.

Episodes like “Deep Space Homer” poke fun of the fact that the average American is not interested in academic pursuits when there’s football to be played. “Lisa the Vegetarian” played with intolerance while changing some people’s perspective on eating meat. Ray Romano may not be able to do the same when he’s voicing cute forest creatures in his next snooze-o-rama Pixar feature.

Speaking of Pixar, Silverman left The Simpsons briefly to pursue bigger projects. His first animated feature as a director was the uninspiring Road to El Dorado with all those Elton John tunes. He then worked on Ice Age for about three weeks before returning to work on The Simpsons.

The biggest news now is the movie. It’s being treated with the secrecy made famous in the “Who Shot Mr. Burns?” cliffhanger, only more so. Silverman himself is mum on the subject. “I can tell you definitely that it will be in color. The main character will be a guy named Homer, and a woman named Marge appears in several scenes,” he chuckles.

When I ask if the plot line posted on the Internet Movie Database is accurate–Homer swamps the town of Springfield with nuclear waste and everyone must be evacuated–Silverman sort of laughs and says, “That’s the real-not-true-but-maybe-could-be plot line.”

Beyond the movie, Silverman has little in store for the future. “I seem to be doing fine without a plan so far. I don’t work from plans.” When he’s not working, Silverman watches little television himself. “You know one show I want to see? Lost. But I won’t watch it until I can see the first episode, and when’ll that happen? When I’m not working, I don’t get a lot of time to watch TV. I try to go out and enjoy life.”