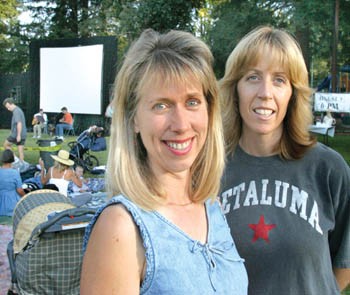 Movies in the Park

Film Forum: Lisa Sides (left) and Robin Harigan saw the need for a community-oriented film night, and filled it.

It’s been decades since Petaluma had its own drive-in movie theater and at least two years since the last remaining indoor movie theater in town shut its doors. While the progressively minded Friday Night Film Series at the Petaluma Coffee Cafe has filled a tiny portion of the local movie vacuum, that series has ended for the summer. So unless you count watching the Wonderful World of Disney at your grandmother’s house, the only show in town may be the one held under the stars in Petaluma’s tree-filled McNear Park.

That is where a pair of Petaluma moms, Lisa Sides and Robin Harigan, have established Petaluma’s first official Movies in the Park series, screening popular films once a month throughout the summer in a comfortable picnic-and-a-movie setting. Think of it as a Films among the Oaks festival. You could even call it Field of Screens.

Modeled after similar film-night events held in other parts of the North Bay–and specifically inspired by Marin County’s long-running outdoor movie series–the premiere season of Petaluma’s Movies in the Park was kicked-off in mid-July with a well-attended screening of Steven Spielberg’s E.T., a fitting enough film to be watched under a moonlit sky while wrapped in blankets, hanging out on a grassy playing field in the park. Granted, the McNear park may not be a 12-screen multiplex with stadium seating and fancy cup holders, but for those who crave the human connection of seeing movies with a crowd, it’s a whole lot better than sitting home alone eating popcorn in the dark. And for that matter, a much better bargain.

Conceived as a fundraiser to help complete the remodeling of the Polly Hannah Klaas Performing Arts Center, the Movies in the Park events are technically–get this–free. The donations of $4 per adult and $2 per child go toward completion of the performing arts center. Besides that, in case you’ve never been there, McNear Park, at the corner of G and 11th streets, is an exceptionally pretty place to spend some time.

“This is a great place to see a movie!” exclaims Harigan, standing with Sides in front of the vast safety netting near the warm, green outfield. At the moment it all looks like, you know, a baseball field. But come the next Movies in the Park night, a large screen will be stretched out between two utility sheds, the smell of popcorn and coffee and assorted dinner foods will be floating in the air, and folks will be playing cards or throwing Frisbees while waiting for the show to begin. “It’s such a cool event,” says Sides. “Petaluma’s been needing something like this.”

For Sides and Harigan, the Movies in the Park ball got rolling two years ago when the two Petaluma women–who at that time knew each other only casually, as busy mothers picking up or dropping off kids at the Petaluma Parent Nursery School–accidentally bumped into one another in Marin at an open-air screening of A Bug’s Life. That film-night experience inspired Sides and Harigan to start daydreaming. At some point, recalls Harigan, one of them said, “We should do something like this in Petaluma–ha, ha, ha!”

A year later, when both families once again met up in Marin to see The Wizard of Oz–“Only this time we planned it,” reports Harigan–the idea of a Movies in the Park in Petaluma was raised again. “We talked about it,” Harigan says, “and then we just said, ‘That’s it. We’re going to do this.'”

“Actually, we’re a perfect team for this kind of thing,” allows Sides, laughing, “because we both know a little about film and theater. We both know how to put on a show.”

To say the least. Harigan has an extensive background in the movie business, having served as production coordinator on numerous commercials and feature films and done sound work on several animated films, including the Woody Allen-voiced Antz. Sides has worked extensively in the theater world as a stage manager and lighting designer for Cinnabar, Marin Theater Company, and Marin Civic Light Opera. With a combination of theatrical flair and hometown community building, Harigan and Sides have brainstormed a Petaluma-style Movies in the Park experience that will take what others have done and cavort with it a step or two further.

At the Movies in the Parks this summer, there will be preshow entertainment, some combination of musical ensembles, jazz groups, magicians, and the like. While the Petaluma Parent Nursery School will be selling popcorn, Johnny Garlic’s will be on hand to provide dinner for those who choose not to bring their own picnic spreads. Other food and drink providers, including Jumping Java and the Girl Scouts, will be in place selling coffee and baked goods, respectively.

That said, the main attraction will certainly be the films, the next of which, slated for Aug. 16, will be the Oscar-nominated animated adventure Ice Age, in which a band of prehistoric critters take on a babysitting job amid avalanches and earthquakes. Harigan and Sides anticipate (and intend to encourage) a lot of spontaneous participation from the audience, perhaps a bit of booing and hissing and cheering along the way.

“We chose these films to reach as broad an audience as possible,” says Harigan, whose all-time favorite film, The Princess Bride, will close out the season with a Movies in the Park screening on Sept. 20 (entertainment for that show starts at 6pm, rather than 7pm). “I can watch that movie over and over again,” she says, “so I always had that one in my head to show this summer.”

“It’s a social event,” says Sides of the experience. “It’s friends and neighbors coming together as a community, to see people you know and meet new people, and to have fun together doing something we all enjoy, which is watching movies.”

Next summer, they might expand from three films to six or eight films, and there has been talk about establishing movie themes for future summers, such as a series of films that were shot in Petaluma.

“It’ll all depend on how it goes this summer,” says Sides. “We don’t want to overdo it till we know how many people really want this in Petaluma.”

At any rate, this movie-loving duo is clear that Movies in the Park will become an annual event, and they expect that each year will bring new ways of having fun.

“We have lots of ideas,” laughs Harigan. “Lots!”

The showing of ‘Ice Age,’ on Aug. 16, will be preceded by entertainment starting at 7pm. Budderball the Clown, the Cherry Valley Elementary Rhythm Ensemble, and James K and Friends will perform. For more information, call 707.765.8828.