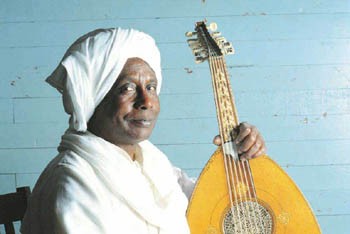 “I speak six languages and sometimes they all come out at once,” apologizes Hamza El-Din as he struggles to find the words for “goodbye” after an interview at his San Leandro home.

The whimsical moment of polyglot farewell underscores the multicultural side of this world-class singer, composer, and instrumentalist. Fifty years ago, he blended the rhythmic, sensuous music of his homeland in Sudanese Nubia with the plaintive sound of the ancient Egyptian oud, a fretless, short-necked precursor to the lute and the principal instrument of Arabic classical music.

It was a bold move. Nubia’s strict Muslim society had not embraced the instrument, and frowned on the idea of music as a profession. Musicologist and record producer Robert Garfias noted some 30 years ago that “the result is not a loose amalgamation of two vagrant forms of music but an entirely new mode of expression.”

Humble and gracious and sporting a broad, open smile, El Din, who performs Aug. 14 at the Healdsburg Guitar Festival, introduced his music to America in the early ’60s, recording the landmark world-music albums Music of Nubia in 1964 and Al Oud: Instrumental and Vocal Music from Nubia in 1965, both featuring original compositions performed in a traditional style and released on the Vanguard label. In 1964 he performed at the Newport Folk Festival and went on to share an apartment with guitar virtuoso Sandy Bull while teaching oud to American students.

El Din, 73, may not be a household name in his adopted America, but his work has continued to exert a profound influence on performers in the States, and El Din maintains a close relationship with a wide range of classical, world-music, and rock acts. For instance, in 1992 the Kronos Quartet paid tribute to El Din on its Pieces of Africa album by covering the evocative title track from his classic 1971 album Escalay: The Water Wheel. Former Kronos cellist Joan Jeanrenaud also recorded a haunting 17-minute version of “Escalay” on her recent solo debut Metamorphosis.

In 1982 Grateful Dead drummer Mickey Hart produced El Din’s album Eclipse for Hart’s acclaimed world-music series–El Din also is a master of the tar, a single-skinned drum played with the finger tips. Later, in 1990, Hart joined El Din onstage at the Marin Center at an international drumming summit. “He’s the most generous artist I’ve met in the United States,” says El Din, who introduced Hart to the musical magic of the desert villagers during the Dead’s 1978 Egypt tour.

Yet El Din was renowned long before a new generation of young, hip world-music buffs “discovered” his haunting rhythms and surging lyrical melodies. He began playing the oud during the late 1940s when he was an electrical engineering major at the University of Cairo. He later studied music formally at the Cairo Conservatory of Music. It was there, notes Garfias, that El Din began to draw the moods and the musical shades of ancient Nubia into the vast technical and aesthetic structure of Arabic classical music.

At the time, the Egyptian government had begun the massive Aswan High Dam project, which called for flooding hundreds of small villages–an action that was expected to sweep away forever much of Nubia’s rich musical culture. “Like so many college students, I wanted to get politically involved because I couldn’t convince my people that the water would come that high and cover their land,” El Din recalls. “So someone said, ‘Why don’t you sing it?'”

He’s still singing his own compositions as well as traditional Nubian folk tunes and Middle Eastern songs in his native tongue, which has been largely abandoned since Nubia was partitioned by Egypt and the Sudan.

Where does El Din find the musical inspiration? Well, he says, when playing tar he takes his cues from the drum itself. “You are not playing it,” he says solemnly, “it is playing you. You must feel exactly what is coming through it at any given moment. A lot of that has to do with touch. If you force it, you end up killing the overtones.”

Is that his secret?

“It’s one of my secrets,” he adds with a laugh.

Despite his virtuosity, El Din remains a gentle servant of the sounds that flow through his fingertips. “I don’t know how to respond when someone compliments me,” he says humbly. “It’s the grace of God.”

A truly amazing grace at that.