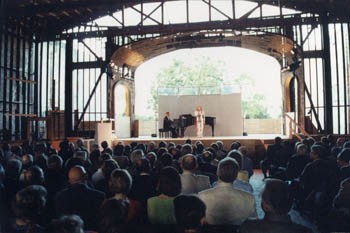 Fundraising efforts have gathered within $500,000 of the $14 million goal. Once the final funds are secured, the addition of a balcony to the green room will begin. Work on the interior space was started in 2000; a number of benefits were staged before the theater was finished–including this one, staged without the theater’s back wall. The main hall is being named the Margrit Biever Mondavi Theatre, in recognition of the Mondavis’ contribution to the fundraising efforts.

On a hot evening last June, people packed into the Napa Valley Opera House for a momentous occasion: the first public performance in the newly restored building since 1914. The performer was Dianne Reeves, who was touring in support of her Grammy-award winning record, The Calling: Celebrating Sarah Vaughan. The small cafe tables and low stage in the newly restored Cafe Theatre made for an intimate setting, and as Reeves’ voice wrapped itself around the listeners like a warm blanket, the crowd could have been at celebrated Oakland venue Yoshi’s or San Francisco’s Cafe du Nord.

But this was Napa, the land that music forgot. Locals had long complained about the dearth of performance venues in the town of Napa and in Napa Valley as well. But as Reeves’ voice rose to the ceiling, despite the excitement of the event, expectation was weighing down, because the main stage, above, stood empty.

The Cafe Theatre has had a successful year, hosting performers like Linda Tillery and Josh Kornbluth. But the venue, which seats 180, was only ever meant to be a step toward the primary goal of opening the main stage. And, as of Aug. 1, when the main stage opened with Rita Moreno’s sold-out performance, little Cafe Theatre took second stage, as it were, to the grand space above.

And grand it is.

Ennio is a lip-synching artist with tear-off paper costumes, easing his transformation from the Mona Lisa to the pope to Whitney Houston. He performs at the Opera House Aug. 15-31.

The theater is a masterpiece of feminine curves, bright and airy despite its relatively small size. The most striking touch is the curved balustrade of the upper-floor dress circle, which brings audience members surprisingly close to the stage. The wood of the balustrade has deliberately been left unfinished so theatergoers can touch the wood–the same wood that was touched by theatergoers a century ago–and see and feel the history of the place.

In all other aspects, the history of the Opera House has been entirely re-created. The building is listed as a historic building by the Historic Preservation Commission, which offered a grant toward its refurbishment and mandated that the theater be exact in its replication (technical advancements notwithstanding).

Thus, the pale yellow of the walls, the lush red of the seats, the deep proscenium of the stage, the wainscoting and staircase, as well as smaller features like the cornices and ceiling light–it’s all as it was in 1879. Executive director Michael Savage calls it “intimate grandeur.”

The Opera House facade was refurbished in 1996. The structure was designed in 1879 by Samuel and Joseph Newsome in classic Italianate style, with its flat, stone facade in lengthy vertical proportions and tall, rounded second-story windows. The inside has contained all the restoration action for the past eight years, though efforts to restore the building began in the 1980s, thanks to the efforts of a number of people, including the late Victoria di Rosa.

The original Opera House staged musical theater, as well as hosting stars such as Jack London and John Philip Sousa. In planning the new opera house, a survey was conducted to see what people were interested in. According to executive director Michael Savage, what they most want are plays, musical theater, opera, dance, jazz, chamber music–“everything really.” The model is Cal Performances in Berkeley, and “the aim is to bring in really top quality shows.”

Top of the Line

Restoring the theater was obviously not as simple as painting walls and rebuilding the stage. Savage and others were dedicated to ensuring that the Opera House regain its 19th-century glory and that it have 21st-century technology. So the sightlines are clean, the seats are comfortable, and the sound is fabulous.

One of the first and most important changes was earthquake retrofitting. According to Savage, during the first winter of restoration the roof was removed and structural steel was lowered in.

The acoustics, of course, were given a great deal of attention. Acousticians were brought in, and they mandated details such as plaster walls rather than sheetrock. The walls had to be uneven and thick, and they couldn’t be painted. So the pale yellow color of the walls is actually integral to the plaster, rather than painted over.

Because original owner George Crowey was worried that he wouldn’t be able to make enough money from ticket sales, he built the Opera House main stage on the second floor. The first floor hosted three narrow shops, one of which was a butcher shop. The downstairs Cafe Theater will now serve as a piano bar and lobby, where guests can linger and buy snacks and drinks before and after performances.

Savage is also quite proud of the restrooms, which are large. He noted that at the San Francisco Opera, where he worked previously, “the restrooms are so crowded there that women will be seen racing through the corridors just before the end of the act to get ahead of the line. We’ll never have that problem here.” He adds that a woman recently gave a gift “just on the strength of the women’s room.”

In the old days, when there was an orchestra, the musicians sat in front of the audience. Now a modular pit filler allows for the stage to be extended by nine feet. If the seating space needs to be larger, the filler can be removed, with the pit still holding 40 musicians.

In the theater’s previous incarnation, the building stopped at the back of the stage. Performers left the stage and found themselves on a catwalk, which led them to the hotel at the corner, where they changed. The backstage now holds four roomy dressing rooms, a green room that can be rented out, a freight elevator, and a technical room.

The first show staged at the Opera House (which has never, actually, staged an opera, but was named an opera house so as to distinguish itself from less respectable venues), in February of 1880, was Gilbert and Sullivan’s HMS Pinafore. That show will be making a return to the theater’s stage as the first main production this season, “for obvious historic reasons,” says Savage. The show made its way to Napa in 1880 within 20 months of its world premiere in London. This aptitude for being “up with the times,” as Savage puts it, is something that the venue hopes to re-create.

To that end, the Opera House has a far-reaching repertoire in its appointment book so far. The Vienna Choir Boys, Wynton Marsalis, the Pocket Opera, and the Taylor 2 Dance Company are all expected to make an appearance over the next few seasons.

Ticket prices will remain modest; prices for the first month top out at $35, and some are as low as $10.

Savage hopes to see people from all over the Bay Area, and beyond, at the Opera House. North Bay residents are the base market; but five million people a year visit the Napa Valley, and they are all welcome to visit the Opera House.

Savage also would like to organize a summer opera festival with Mozart and other 18th-century composers. He says, rather wistfully, that “this is the sort of theater that Mozart would have known in a beautiful palace in Austria or Germany.”

Tickets for Napa Valley Opera House performances are available online at www.napavalleyoperahouse.org, by calling 707.226.7372, or at the box office, 1000 Main St., Napa.