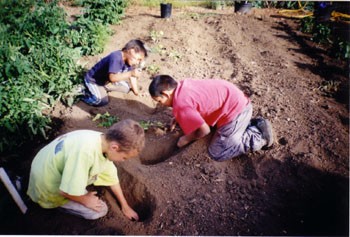 Garden Therapy: Kids from the Family Support Center enjoy the fruits of the garden–after a little work.

How a Garden Grows

An empty lot is transformed into Sunflower Gardens

Before the garden, this piece of land reminded me of a scene out of wartime Beirut,” says Mike Turley, neighbor and site operator of the Catholic Charities Homeless Service Center. He’s talking about Sunflower Gardens, the blossoming oasis at Morgan and A streets and across from Catholic Charities Family Support Center. “People abandoned their cars here; you had whole families living in them.”

Sunflower Gardens is a collaboration between the Santa Rosa Recreation and Parks Department and Catholic Charities Family Support Center, a homeless shelter. It’s completely organic (though not certified), offering an elaborate weaving of fruit trees, greenhouses, vegetable gardens, sculptures, places to sit, and floral displays. It provides an abundance of food to the shelter and community members, as well as an afternoon children’s gardening program run by Recreation and Parks.

More importantly, as Betsy Timm, associate director of development and communication at Catholic Charities, points out, “It is so grounded and such a source of beauty. It lends dignity to all the people that use it. Our overarching goal is to create hope and offer health. The garden works on a subliminal and underlying basis.”

The lot that the garden inhabits used to host a Queen Anne-style house. When it burned down in the early 1990s, the site quickly deteriorated into a large receptacle for garbage and abandoned cars.

In the mid-’90s, the construction of the Santa Rosa Memorial Hospital parking garage paved the way, in a sense, for the future garden. The conveniently empty lot received a huge load of soil from the building site, brought there for sifting after suspected Native American artifacts from a possible camp were found. Tom Origer, adjunct instructor of anthropology at Santa Rosa Junior College, and Grant Smith, a Pomo elder, supervised the quest.

Origer estimates the projectile points, obsidian flakes from tool making, and milling equipment to be 1,000 to 5,000 years old. Most of the soil was later removed to another location, and the artifacts became part of a collection at Sonoma State University, housed in the Anthropological Studies Center.

The dirt left behind formed the base of the present garden’s namesake sunflower mounds. According to Turley, surprised gardeners have sometimes unearthed an occasional remnant of the project–a projectile or some obsidian flakes. The 15 varieties of sunflowers seem to like their rich heritage, crossbreeding to form unique colors and sizes. Luther Burbank would have visited this garden.

Pam Peck, a quadriplegic neighbor, initiated the metamorphosis of the site in an attempt to transform the eyesore into something useful and to make the neighborhood safer. Turley and several others joined her to help with the massive trash cleanup. Lillith, an Americorps worker, used all of her connections to get the area plowed and the weeds pulled. The Family Support Center provided the water, PVC piping, and manpower. For the first two years, hoses were brought across the street for the watering.

It wasn’t until Bobby Ewall, recreation coordinator for Santa Rosa Recreation and Parks Department, found out about the project that it gained the steam necessary to bring it to its present form. (Ewall’s daughter is Peck’s goddaughter.) Ewall was able to secure a $5,000 grant from the city as start-up money for the community garden and “da Pad,” a teenage rec hall across the street. Ewall’s uncanny ability to stretch dollars, his numerous connections with volunteer organizations, and his bartering skills have brought the garden to its present stature.

When Ewall first walked into the lot, the weeds were six feet tall. He claims to have rototilled at least a hundred times, revealing a never-ending stream of car parts, clothing, and various beverage containers. According to Ewall, more sweat than gardening ability went into this venture. It took him a year and a half to actually enjoy the garden. “I can actually stop now and smell the roses,” he exalts.

Melissa Black, a recreation specialist with Recreation and Parks, joined forces with Ewall in the beginning to create the gorgeous landscape. She helps oversee the temporary staff hired from the neighborhood and the numerous volunteers. Black says that she’s been happy watching “the program come to life and seeing the enjoyment people get out of it.”

The children staying at the Family Support Center are some of the major recipients of that enjoyment. Andrea Jolicoeur works with the children at the center in an afternoon program. She wants to give the kids “a positive experience with nature.” She loves her work, explaining, “It’s good for me, it fulfills me. This work is so hands-on, so different from their school.” She likes to see children’s faces when they realize “this is where a tomato comes from” or “this flower becomes a strawberry.”

Thirteen-year-old Amber says that it’s “really cool to plant something and see it all grown.” She likes getting dirt beneath her fingernails. And for nine-year-old Cheyenne, her pleasure comes from the watering and the harvesting. “I like to go into the garden and enjoy it,” she says, “instead of being in the city without plants.” Anna Maria, who is almost 12, is a flower enthusiast; she likes to plant, water, and pick them.

Sometimes Jolicoeur will see some of her apprentices watching television in the shelter, and they’ll call to her and ask, “How’s my plant doing?” Some of the children don’t get to see the whole seed to harvest progression because of the brevity of their stay. Jolicoeur likes to send each of them off with a plant.

Timm says that 57 percent of the families move into stable housing after a stay at the Family Support Center of 90 to 120 days. Perhaps their plant will be planted at their new home. The others get to take a reminder of their experience, a plant that only needs water and sunlight to survive.

Serena Mora, a Recreation and Parks recreation leader, is enthusiastic about the community involvement in the garden. “Even disabled gardeners can use our garden.” There’s an area for the visually impaired. She enjoys the whole process of starting with a seed and the “focus on growth” on everyone and everything involved.

Sunflower Gardens is a curious blend of plants, herbs, and structures–much the same as the diverse group of people who have molded it and continue to do so. A 20-sided greenhouse built and donated by the Universal Industrial Church, a strawberry garden flanked by benches, recently braided garlic above an office desk, a bathtub of geraniums, a koi pond, blue pinwheels, and a place to store a homeless woman’s plants (her source of income) are some of the many attributes the garden offers. An apron of land around the outside of the chainlink fence sprouts grapes, tomatoes, strawberries, geraniums, and squash. It was purposely designed that way to invite picking.

This menagerie manages to produce a sizable amount of food for the shelter as well as the community, and provides a resting place for humans and the garden’s other inhabitants, like the monarch butterflies, ruby-throated hummingbirds, ladybugs, snails, and the occasional owl.

Ewall hopes to have this garden sustainable soon. He would like to find a group willing to adopt it for a month or a year, or to grow and sell plant starts to support the garden. The garden barely squeaked through the city budget this year, and the city has another community garden in the Apple Valley area that needs attention, too.

Ewall would like to step away from Sunflower Gardens and have it operate on its own. He has visions of turning other city lots into food sources and places of beauty and have them sustain themselves.

The influence of Sunflower Gardens has spilled onto the entire block. Plants propagated from the garden promenade up and down the street. The beautiful florals have dressed up the neighborhood. It’s hard to feel glum walking down this street.

Volunteers are needed all year round but particularly in October, February, and March. Contact Bobby Ewall at 707.543.3290 to volunteer or donate money, plants, or gardening resources. The Rosie bus will bring visitors from the Santa Rosa downtown market to Sunflower Gardens on Wednesday, Aug. 13. Catholic Charities Family Support Center will host an open house and showing of photographs in conjuncture with the children’s museum on Oct. 16. Call 707.528.8712 for more information.