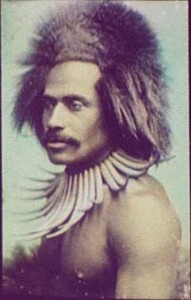 You Are What He Eats

Mark Nuckols is an adventurous eater. He’s dined on insects, bull testicles, sheep eyes and other delicacies. “There are very few things that I wouldn’t try,” says Nuckols, an MBA student at Dartmouth College. So when he read anthropological accounts of Aztec human stew about eight years ago, Nuckols was intrigued.

“I would try it if I happened to be there,” he says.

The thought of eating human flesh always fascinated him, and years later when he was rereading an essay about cannibalism while eating a Tofurky sandwich, the thought occurred to him: Why not try to approximate the taste of human flesh? Thus was born Hufu, a line of meatless products billed as “the healthy human flesh alternative.” The products are made from textured tofu by a Dutch company that wishes to remain nameless. Nuckols sells his products as well as T-shirts and other merch at www.eathufu.com. The website also includes essays about cannibalism, a practice Nuckols calls “the last taboo.”

Hufu was originally conceived as a product for anthropology students hungry for the cannibal experience but “deterred by the legal and logistical obstacles.” But the positive, sometimes incredulous, feedback Nuckols got encouraged him to take his products to a wider market.

In addition to approximating the taste of human flesh, Nuckols says his business is meant to “shock and provoke” people. He’s accomplished that. He gets criticism from people on the left who says his logo of a Fijian cannibal leering over a cauldron of man stew is a degrading stereotype. Critics on the religious right say he’s mocking the sanctity of life and traditional values. Offending both groups must mean he’s doing something right. About half the people he encounters react positively to his products.

“If we could get a real headhunter to do a taste test, that would be best,” he says. In the meantime, you’ll have to take his word for it.

In addition to the novelty and anthropological curiosity of Hufu, Nuckols says his human-flesh alternative is just the thing to one-up that food-snob friend who’s always showing off at dinner parties with foie gras and tins of caviar. “It’s hard to top this,” Nuckols says.